OF all the championships his franchise won in the Philippine Basketball League, Mikee Romero said it was the fourth crown that he truly cherishes.

That came in 2007 when Harbour Centre took home the V-Go Extreme Energy Drink Cup two days before the turn of the year when the Batang Pier defeated Hapee Toothpaste in dramatic fashion.

The Batang Pier stunned the Complete Protectors in the deciding match that went into overtime, 94-88, after overcoming a 19-point deficit to extend their dynasty in the PBL.

“Hindi ko rin alam,” said Romero recently as he tried to describe how his team was able to come back from that huge deficit. “That’s my most memorable.”

Before becoming the NorthPort squad in the PBA, Harbour Center built a tradition in amateur basketball after winning seven straight championships during its run in the old PBL. But Romero still vividly remembers title number four in which the championship series went the full route. 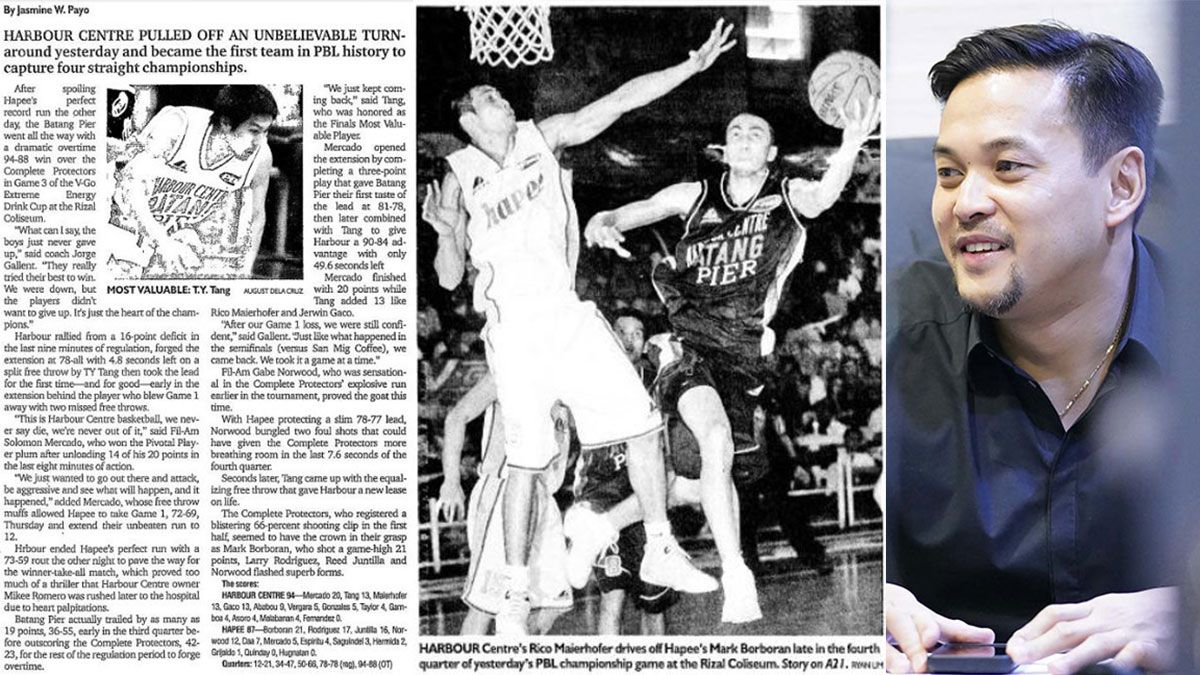 The title clincher came during the rubber match of the best-of-three finals series held at the Rizal Memorial Coliseum. Hapee won Game One, 72-69, but Harbour Centre forced a decider with a runaway 73-59 victory, preventing the bid of the Complete Protectors to sweep the conference.

The Complete Protectors looked poised to take home the crown in Game Three as they held a 55-36 lead early in the third quarter, according to a game account by the Philippine Daily Inquirer.

The decider was so intense that Romero, based on the report, was rushed to a hospital after experiencing heart palpitations.

Harbour Centre, coached by Jorge Gallent, came storming back to win in overtime, 94-87, with Sol Mercado serving as the hero of the game with 20 points to capture the Pivotal Player crown and TY Tang grabbing the Finals MVP.

Rico Maierhofer, Dylan Ababou, and Jerwin Gaco were also part of the squad and they eventually made it to the PBA following that conquest by Harbour Centre.

In the final moments of the game, Mercado drained a triple to break a 78-78 tie and Tang buried a three of his own, 90-84, with 49.6 seconds left. Tang celebrated by pumping his fist in the air in perhaps the most memorable sights of that deciding game.

Harbour Centre won three more championships in the PBL but nothing compares to that hard-earned win for Romero.

“Many of the basketball fans say that it’s still one of the most memorable [championship],” said Romero.