ONE is never too young to make a mark in sports.

SPIN.ph caught up with a trio of impressive ballers at the Gatorade Hoops Center in Mandaluyong City during the adidas Nations Skills Camp, a grassroots program with NBA Fit that aims to develop basketball skills of kids 10-13 years old.

The clinic was topbilled by former NBA coach Brian Shaw and Utah Jazz guard Alec Burks, but three of their students stole the show with skills and guts rarely seen from kids their age (incidentally, all listed NBA MVP Stephen Curry as their favorite player).

Called “Alaska Boy” by his teammates for a recent TV commercial he did, Julian said he was invited by his coach to the camp because, “I work hard every practice.”

“I felt proud. I will remember the discipline and how to work hard,” said the 13-year old from La Salle Greenhills who didn't find the camp hard at all, citing the layup and shooting drills were his favorites.

He doesn't know much about three-time NBA champion Shaw and is only vaguely familiar with Burks, listing Curry as favorite NBA player because of his shooting skills. Like the Warriors star, he also plays the point guard.

Julian said he would just smile at folks who recognize him from his Alaska Milk commercial, where he reprised the role of the basketball whiz kid in the original 1974 commercial first played by Michael Uytengsu - brother of current Alaska CEO Wilfred.

Here is that commercial:

In the new Alaska Milk commercial, the La Salle standout played a fan of the Alaska Aces who used his athleticism to meet his 'idols,' with Cyrus Baguio rewarding him a game-used jersey for his efforts.

The elder Jugo used to play for La Salle in high school and junior varsity in the UAAP before imparting his love of the game to his boys, taking the time to train them. Playing basketball became their bonding moment. 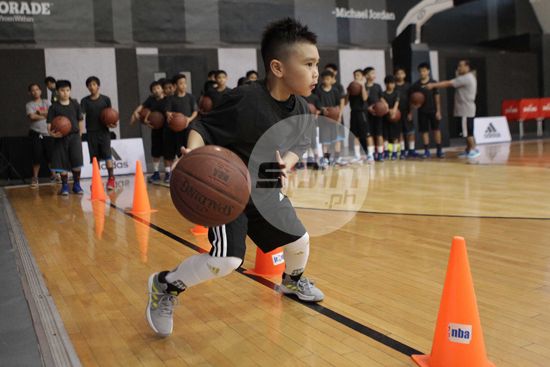 The shortest and the smallest player on the court was also one of the most well-known, with Matt Barnes and Stephon Marbury among his 16,200 followers on the photo- and video-sharing social site Instagram.

“Lil’ Dom” has impressed people with his dribbling and ball-handling skills taught to him by his father, Kiko.

“They say, ‘You're so good!’ and ‘Your game is so nice!’ the seven-year old told SPIN.ph after the camp.

Dominic said he doesn’t know the exact number of people who follow his Instagram account (managed by his dad). When asked why many people watch his videos, he smiles and said, "It's because I play good."

“It just used to be my personal account then people started following and some players in the States would repost him on their pages and that's how the following started. It was kinda unexpected but he was used to taking videos of himself. As long as he's happy then everything is good,” his father told SPIN.ph.

The Grade Two pupil is currently in the training pool of La Salle Greenhills and has to wait a few more years before he can join the team.

“I just want him to have fun in the game and that's it, he's just a kid. You never know what he wants in life but as long as he's a kid I'm going to let him have fun. It’s been a year so I think he’s aware of it. People come up to him, he smiles, he knows the value of his heart. He puts work in and he enjoys that part,” Kiko pointed out.

Dominic used to train with his dad but now shows him drills of his own which he sees from sources that include television and YouTube.

“He emulates them and tries to make it his own,” the proud dad said.

One of the NBA Fit coaches was so impressed that he gave a happy Dominic his own pair of adidas shoes after the clinic. 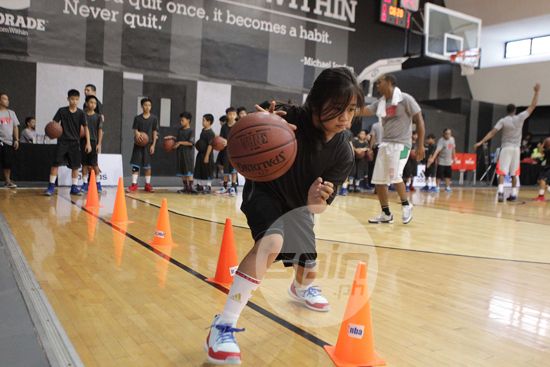 Princess garnered a lot of praises from Shaw and the other NBA Fit coaches, not only because she was the only girl among the 50 ballers present but for the way she handled herself during the proceedings.

Turning 10, Princess proved he can be one of the boys as she went through every drill with determination etched across her young face and never for a moment looked daunted by all the boys.

Playing basketball since she was six years old, Princess said the camp was her dad's birthday gift to her.

She said she felt “proud when coaches praised her efforts on the court. She said she found the behind-the-back and between-the-legs dribbling as the most challenging portions while her favorite part were the shooting exercises.

The De La Salle-Zobel student said she wants to be a point guard. And she roots for the Golden State Warriors. 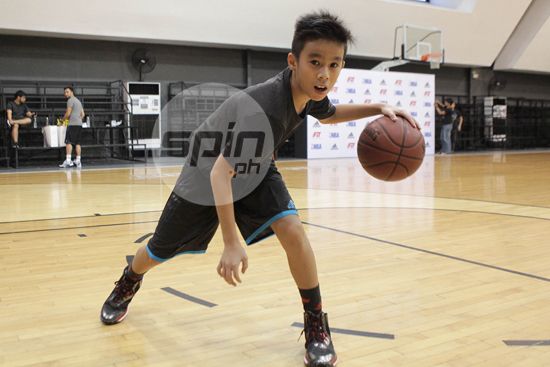