Duremdes, Locsin, Ildefonso, Esplana and Aquino stand out - their sons, that is

IT didn't seem too long ago when the likes of Kenneth Duremdes, Danny Ildefonso, Noli Locsin, Gerry Esplana and Marlou Aquino ruled the court - basketball heroes adored by fans, their feats celebrated in the sports pages.

Time sure flies so fast.

Now there's a new wave of players chasing their dreams - a unique group who as tots used to tag along their basketball star dads, much like Steph Curry to dad Dell and, most recently, Riley to Steph.

Only time will tell if these kids can live up to the names at the back of their uniforms, which, as second-generation players before him belatedly learned, can be both a blessing and a curse.

Some will succeed (read Kiefer Ravena, Jeron Teng), some will not (that's a longer list right there). But they all have one thing in common, a burning desire to 'Be like dad.'

But we have to agree that these players do have one thing going for them: They have good genes.

Meet five of them:

DESPITE having the pedigree of a great basketball player, Kenji Duremdes is careful not to get too far ahead of himself in his budding cage career.

The 12-year-old son of former PBA MVP Kenneth Duremdes admitted there is pressure on him to live up to the name of his legendary father, more so now that he’s starting to make a name for himself playing for La Salle Greenhills. 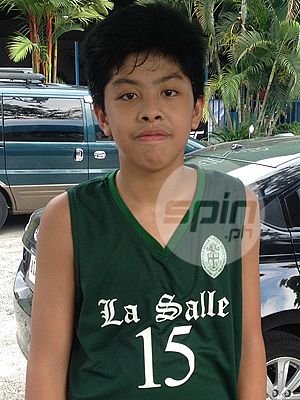 But with the support and advice of his parents, Kenji is taking the pressure in stride.

There is, however, reason to take a good look at the 5-foot-6 youngster.

Allen Ricardo, tournament director of the Milcu Summer Showcase where Kenji played recently, said the younger Duremdes is already a cut above the rest in his age group.

The young Duremdes was actually named to the Mythical Five of the Under-12 division of the Milcu tournament, where he helped La Salle Greenhills capture the age-group crown.

Ricardo added Duremdes, at his age, can practically play all positions.

Kenji, however, downplayed the rave reviews.

Kenji said he isn’t thinking about becoming a PBA player someday, adding he only wants his game to get better while keeping his feet on the ground. 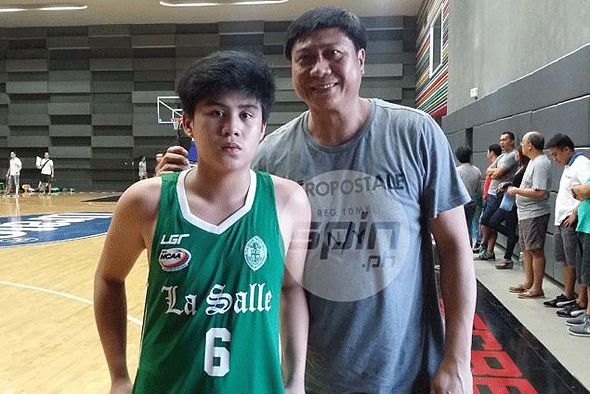 BASTI Locsin was born toward the tailend of dad Noli's PBA career, but the 13-year-old is not oblivious to the success 'The Tank' had during his time.

Little wonder that his dream is to play for the one team where dad spent the best times of his career.

Basti has obviously brushed up on his PBA history, saying he believes his dad would not have become popular during his PBA days had he not played for Ginebra under charismatic playing coach Robert Jaworski.

The elder Locsin was the top overall pick in 1994 by Tondena 65 Rhum Masters (the old name of Ginebra) and won a championship (under the Gordon’s Gin Boars name) in the 1997 Commissioner’s Cup. He averaged 18.5 points, 8.8 rebounds and 2.9 assists in his rookie season and spent five years with the Kings.

As for Basti's own basketball dream, La Salle Greenhills assistant coach Allen Ricardo hopes that the kid's lack of height would push the sweet-shooting guard to embrace a shift to the point guard spot.

Basti is the third child of Noli and Maita. The other kids are Alex, Gabe and Seth.

And what is his advice to his son? 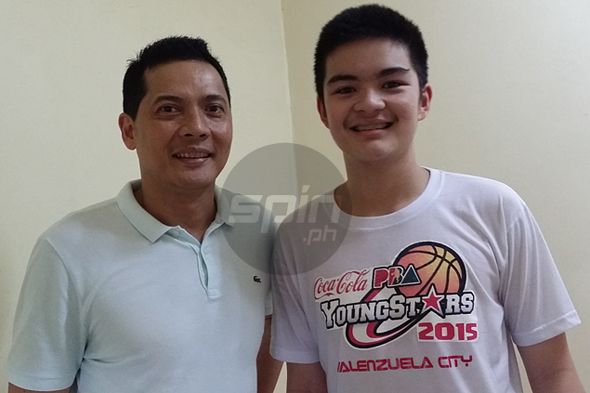 GERRY Esplana is one of the best point guards of his time, a shifty and wily player with deceptive speed and a hundred moves in and around the paint.

“He is a very good point guard, he can score and a very good assist man and can rebound well for his height,” said veteran television commentator Andy Jao of the former PBA Rookie of the Year.

Esplana has long been retired but his basketball pedigree continues to live on, thanks to his 15-year-old son Jai who this early has been attracting attention from scouts of different schools with his athleticism and skills.

Spin.ph caught up with the Esplanas during the Milcu x Got Skills 3 on 3 Challenge at the Philadelphia High School in Quezon City, where the young Jai looked like a man among boys during the matches.

Jai, who at his age is already a couple of inches taller than his 5-10 dad, has become so good that he has joined University of Santo Tomas' junior squad this season.

His dad was the least surprised by Jai's rise. The PBA great, afterall, made sure basketballs were nearby from the time his son was an infant, and watched over him the moment he showed interest in the sport.

The former Emilio Aguinaldo College coach in the NCAA said he would sometimes scold his son if he begins to showboat during games trying to mimic NBA idols Deron Williams and Kyrie Irving.

Jai said he is grateful to have a former PBA player as his dad.

Esplana is looking forward to Jai's stint with the UST Cubs, saying it's high time the teenager gets 'educated' in games against players older than him.

That, he said, is the next step in his development. 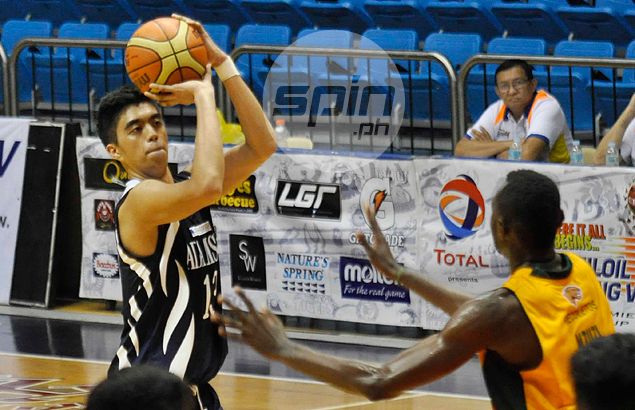 MATTHEW Aquino surprised a lot of people with a rousing debut for Adamson in the 2015 Filoil Flying V Hanes Premier Cup, scoring 20 points as the Falcons edged University of San Jose Recoletos, 62-59.

Aquino, who is 6-7, is not as imposing as dad inside the paint, but he has developed a fine touch from the outside which Marlou never had in his career. Matthew went 5-of-8 shooting from three-point range against the Jaguars.

"If we can put the big man of the other team out and Matthew can consistently hit the triple, kahit papaano magiging maganda ang game plan namin," said Adamson coach Mike Fermin.

However, events that unfolded recently will have a big say on the youngster's development.

Adamson's decision to fire coach Kenneth Duremdes prompted Aquino's dad to resign. The younger Aquino is also leaving the school, with reports saying he will likely move to National University.

On how the transfer will pan out, or on how it will impact Matthew's career, remains to be seen. 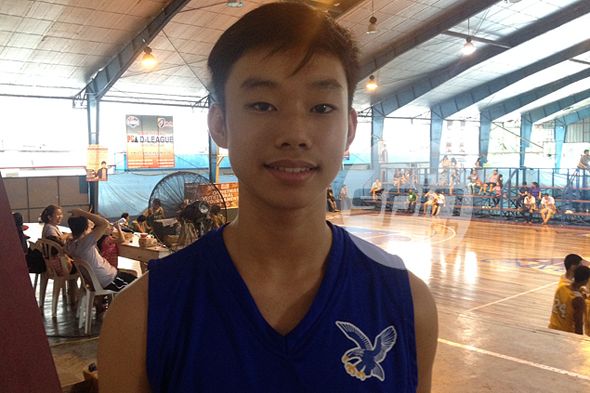 ANOTHER Ildefonso is set to play for the Ateneo Blue Eaglets.

The 6-2 son of PBA star Danny Ildefonso hopes to follow his brother Shaun, who has seen action action not only for the Blue Eaglets but also for the Philippine team to the Southeast Asian Basketball Association (Seaba) Under-16 Championship.

Dave admitted there is pressure to live up to his family name. His celebrated father has won two PBA MVP awards and several championships with San Miguel in a career that is now winding down with Meralco.

“May pressure din pero ina-accept ko na as challenge kesa i-pull down ako nung pressure,” said the teenager, who has already been seen dunking and showing a nice touch from the outside during games.

Dave said dad continues to be an inspiration.

Allen Ricardo, tournament director of the Milcu Summer Showcase basketball tournament, said Dave inherited a lot of dad's skills, but said the kid has a lot more to offer.
“He can dribble, post up like his father and can shoot from three-point range. Right now, all-around siya sa age niya. Mabait na bata at nakikinig. Sana maging determined at focused pa siya sa ginagawa niya dahil big factor siya sa UAAP juniors,” said Ricardo.
Needless to say, Ricardo sees a bright future for Dave.
“He is one of the second generation players na sisikat,” he said.
Read Next
read more stories about:
Read the Story →
This article originally appeared on Topgear.com. Minor edits have been made by the TopGear.com.ph editors.
POLL
Share this Poll:
Retake this Poll
Quiz
Quiz Result
Share this quiz:
Take this Quiz Again