TUCSON, Ariz. — Lute Olson, the Hall of Fame coach who turned Arizona into a college basketball powerhouse, has died. He was 85.

Olson's family said he died Thursday evening (Friday, Manila time). The cause of death wasn't given.

"Coach Olson is the absolute best, one of the greatest coaches ever and one of the greatest human beings ever," Georgia Tech coach and former Arizona player Josh Pasnter tweeted. "My feelings of gratitude and appreciation cannot be put in words. I love him dearly. My heart hurts, but I know he is now in heaven. May god bless his family. #RIP"

Olson spent 24 seasons at Arizona, revitalizing a fan base in the desert while transforming a program that had been to the NCAA Tournament just three times in 79 years before he was hired in 1983. 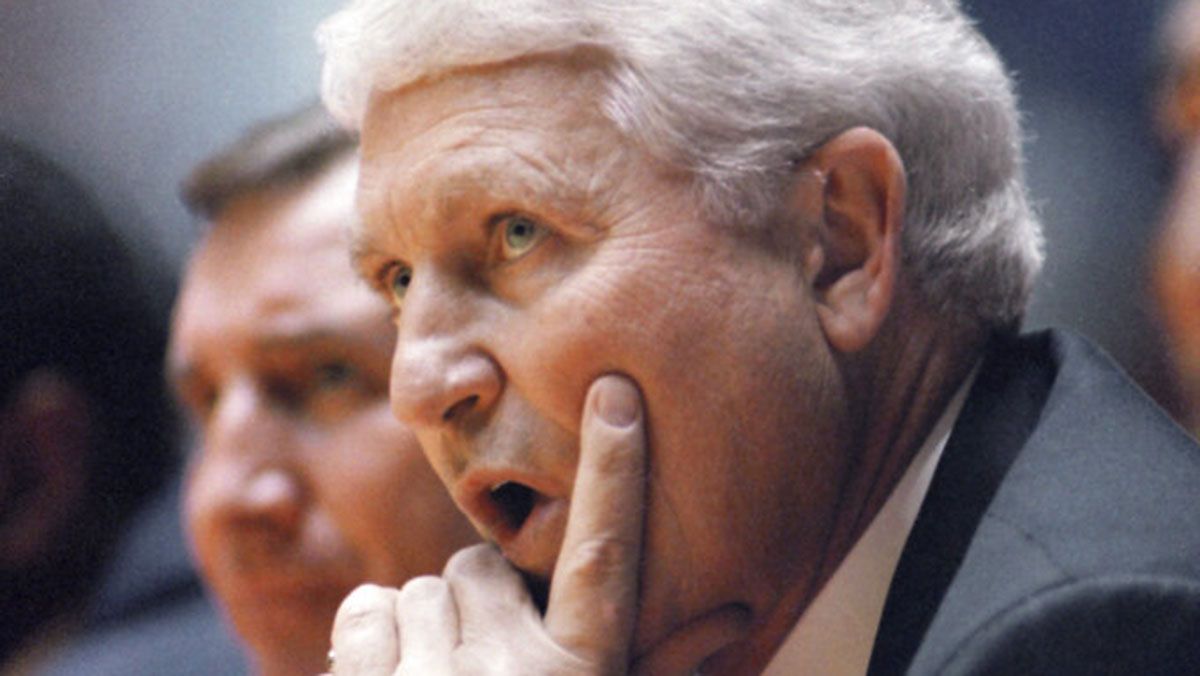 Olson first took the Wildcats to the NCAA Tournament during his second season in Tucson to start a string of 25 straight appearances. The streak would have been the third-longest in NCAA history, but the 1999 and 2008 appearances were later vacated by the NCAA for impermissible benefits to players and recruiting violations.

The Wildcats won a national championship under Olson in 1997 with a team led by Mike Bibby, Jason Terry and Miles Simon. Olson's Arizona teams reached the Final Four four times and lost the 2001 national title game to Duke.

Olson won a school-record 589 games at Arizona, 11 Pac-10 titles and was named the conference coach of the year seven times. He led Arizona to 20 straight 20-win seasons and is one of five coaches in NCAA history with 29 seasons of at least 20 wins.

Olson's 327 conference victories are most in Pac-10/12 history and he was inducted into the Naismith Hall of Fame in 2002.

"It's rare that a man is a Hall of Famer and still under appreciated," former Arizona and NBA player Richard Jefferson tweeted. "I'll always feel like you never got the credit you deserved as a leader, family man, grandfather, coach and as a mentor. I love you Coach O."

Olson had a series of health issues late in his coaching career, leading to his retirement in 2008.

Arizona announced minutes before the 2007-08 season opener that Olson would take an indefinite leave of absence. Associate head coach Kevin O'Neill coached the Wildcats on an interim basis the rest of the season.

Olson was set to return for the 2008-09 season, but the school announced his retirement after he missed practice and a function in Tucson. His doctor held a news conference five days later, saying Olson had an initially undiagnosed stroke earlier in the year, causing depression and impaired judgment. Olson also was hospitalized in 2019 after suffering a minor stroke.

"I will miss seeing him at our home games and hearing our crowd yell, 'Lute!'" current Arizona coach Sean Miller said in a statement "My family joins all of the current members of the Arizona Basketball program in sending our condolences and prayers to his wife, Kelly, and the entire Olson Family. I am forever grateful to be a part of the basketball program and community that he impacted so immensely. Coach O will certainly be missed, but always remembered by us."

Olson remained in Tucson and became a regular at the McKale Center during his retirement, drawing cheers every time he appeared on the video board.

Born on a farm outside Mayville, North Dakota, on Sept. 22, 1934, Olson led his high school team to the 1952 state championship and was a three-sport athlete at Augsburg College in Minnesota from 1953 to 1956.

Olson started his career as a high school coach in Minnesota and Southern California before becoming the head coach at Long Beach City College, where he won the state junior college title in 1971.

He spent one season at Long Beach State before going on to coach nine seasons at Iowa. He led the Hawkeyes to the NCAA Tournament his final five seasons, including a trip to the 1980 Final Four.