KENNETH Duremdes was the best player among the ex-PBA stars who saw action against a team of former NBA stars on Wednesday in a one-off exhibition match at the Mall of Asia Arena.

The 1998 league MVP emerged as the biggest winner as well. 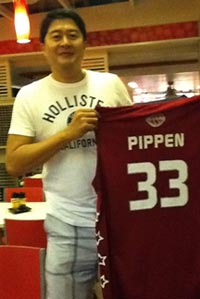 Hall of Famer Scottie Pippen sought out Duremdes shortly after the match and handed him his No. 33 playing jersey after the talented forward led all scorers with 29 points in a game the NBA greats won, 112-93.

The 38-year-old Duremdes said he left like a kid all over again after his idol's gesture, aware that he is the envy of most people inside the venue.

He plans to frame the jersey which he chose not to wash and have it occupy a prominent place among his pieces of memorabilia.

During the game, however, 'Captain Marbel’ turned back the hands of time and apparently earned the former Chicago Bulls star's respect. There were several plays where he was able to elude Pippen’s defense.

In the midst of all the pandemonium inside the playing court after the match, Duremdes sought out just one player.

Teammate Jerry Codinera was also fortunate enough to acquire the uniform of 18-year NBA veteran Cliff Robinson in a pleasant gesture by one top defensive player to another.

Still, there’s nothing like getting it straight from one of the 50 Greatest NBA players of all-time.