How champion coaches Monteverde, Tan nurtured their careers together in 1991

UNIVERSITY of the Philippines coach Goldwin Monteverde and Letran mentor Bonnie Tan must be on cloud nine right now after leading their respective teams to championships.

But did you know that the two were side-by-side once in their coaching careers?

It was back in 1991 when the two found themselves on the same boat for St. Stephen's High School.

Monteverde, on his second year handling the elementary and high school Team B squads for the school, got Tan as his assistant upon the push of St. Stephen's athletic director Lim Eng Peng.

It was actually a coaching staff that is an amalgamation of three Fil-Chinese schools with Monteverde coming from Uno High School, Tan from Grace Christian High School (now Grace Christian College), and Anthony Yap from Chiang Kai Shek College as St. Stephen's wanted to give its athletic program a boost.

It was a hard yet fulfilling task for the two young coaches then, with coach Goldwin trying to sustain what his brother Dondon did for the Masangkay-based school while coach Bonnie doing his part to teach to the younger ones while still studying college at University of Santo Tomas.

Being in the trenches that early in their careers, the two only had fond memories of their time together.

"Di pa uso yung computer games noon, lagi kaming nagma-mahjong," laughed Tan as he looked back at those younger years as they got to handle the likes of Jefferson Tee, who went on and played for Mapua, as well as Charlemagne Lim, Vincent Ng, and Albert Lor, to name a few.

However, that partnership only lasted for two seasons with Tan soon being called back by his alma mater Grace Christian to handle its elementary team. That lasted for only a year before he left for the United States.

Monteverde, meanwhile, was promoted to the Team A of the high school squad a year after starting in the 1993-94 season as he spent the next decade at St. Stephen's and led the team to five Tiong Lian titles. It was the start of his decorated career as he took home more trophies in his stops in Chiang Kai Shek, Adamson, and Nazareth School-National University.

Shortlived as that team-up was, that bond lasted for a lifetime. 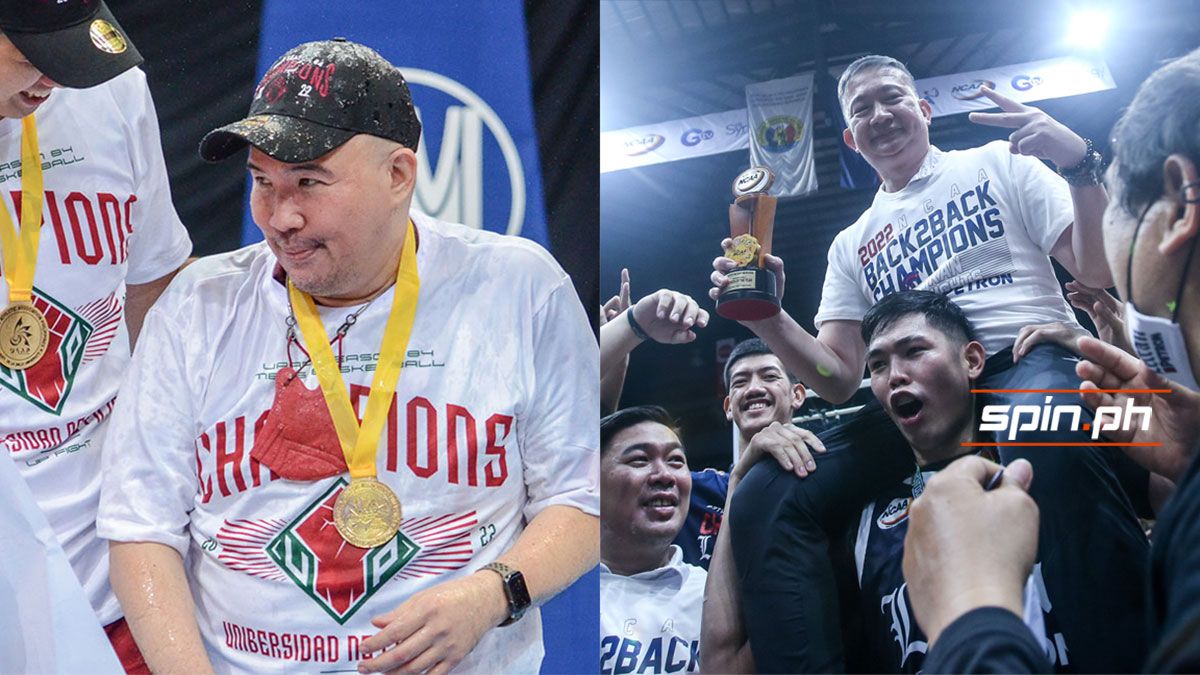 The two would still often cross paths with each other in inter-village leagues with Tan playing for Corinthian Gardens and Monteverde for Northeast Greenhills. Like true competitors, all is fair in love and war. "Alam mo naman si Bonnie, hindi rin nagpapatalo yan," remarked coach Goldwin of their on-court battles three decades back.

Fast forward to now and the two remain tight.

When varsity teams were finally allowed to resume their trainings earlier this year and Letran had no court to play on, Monteverde opened UP's doors for Tan's boys as they spent two weeks inside the bubble at the Diliman campus back in February.

It was a mutually beneficial partnership for the two sides with the Fighting Maroons, filled with up-and-coming stars mostly from the juniors division, still trying to figure out their identity and the hard-nosed yet intact Knights badly groping for form after two years of vacancy.

And the coaches agree: it's ugly basketball in every sense of the word even with the uber-talented UP getting the better of Letran in those three friendlies.

Nonetheless, it gave both teams what all crews need in the leadup to their respective campaigns: that competitive fire.

Who knew that those hot days inside the Epsilon Chi Center would see the two kings of collegiate basketball with UP ending a 36-year title drought to win the UAAP Season 84 and Letran completing a perfect season to claim back-to-back crowns in NCAA Season 97?

"I'm happy talaga for Goldwin," said the 49-year-old Tan who had no doubt that Monteverde could get the job done in his first year in UP even against a juggernaut like Ateneo.

Monteverde was happy to give the praise back.

"I'm very happy kay coach Bonnie sa nagawa niya sa Letran because winning back-to-back is not easy to do," said the 51-year-old bench tactician, sharing that he even sent text messages of motivation to Tan before Game Two of the NCAA Finals against Mapua.

Through it all, it's a win for the Fil-Chinese basketball community as Monteverde and Tan surely made them proud.