IN a rare moment, Kobe Paras played against his legendary father Benjie Paras in the main event of the Nike Rise Legacy Night All-Star Game on Saturday.

It’s one memorable event the prodigious cager will bring with him as he goes back to the US in pursuit of his basketball dream.

“I’m just going to go back to the States and practice. That’s all I do,” Paras said in a brief ambush interview after leading Team Destiny to a win over a Team Legacy side which featured his father and fellow cage greats.

The elder Paras said his son will return to Los Angeles to finish high school at LA Cathedral, as he gears up for college where he is already committed to play for the University of California Los Angeles (UCLA) Bruins.

“It is indeed nice to see if Kobe will follow his dad to be the next rookie-mvp in the PBA-- it will be a good story. However, it would be a greater story if Kobe can play in the big league that is NBA. It will definitely be a big first not just for him, but for the entire country as well. Good luck, Kobe!"- anime94

As always, Kobe wowed the crowd at the House of Rise in Mandaluyong City with his high-flying moves, including a reverse slam off an alley-oop pass from Thirdy Ravena.

During a slam dunk exhibition at halftime, Kobe displayed the form that made him a two-time dunk champion in the Fiba Under-18 3x3 World Championship, when he leapt over Jeron Teng and Nico Salva to the delight of the crowd.

Kobe added he was also glad to have an opportunity to inspire the Nike Rise aspirants in the reality basketball documentary program.

“Everyone has potential. Basketball is a religion in the Philippines. In other countries, it's like whatever. Seeing the passion of the kids, it's wonderful,” Paras said.

But the young Paras cherished the experience of having to go up against some of the legends of Philippine basketball including his father, who also showed he can still play 'above the rim' when he also slammed one home -- but with the help of fellow PBA great Allan Caidic, who carried him in the final moments of the exhibition contest.

“It's crazy. It's not just for us but for the fans. Going up against the legends and people I looked up too, it's amazing,” Kobe said. 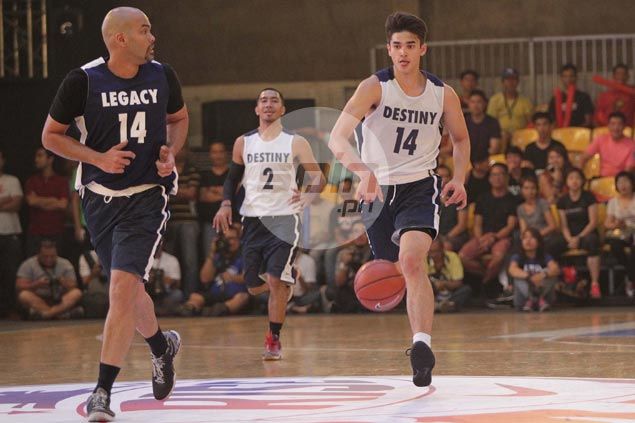