Kai Sotto surprised by sudden popularity, but takes it as challenge to live up to promise

EXCEPT for his height which is quite rare for a Filipino, Kai Zachary Sotto looked and sounded like any other kid, shyly answering questions and ducking those he found awkward.

But a 13 year old who stands 6-foot-9 can only escape attention for so long, and Kai admitted he was surprised by the sudden curiousity about him on social media sites like Facebook, Twitter and Instagram from people who see him as the next big thing in Philippine basketball.

For someone so young, Sotto has a clear idea on what he should do: work hard to live up to the promise.

Unlike other kids who had to be forced to play basketball because of their size, Sotto embracing the game came almost naturally, having grown up around the game because of his dad Ervin - a seven-year PBA veteran who had stints for teams like Alaska and Purefoods.

Kai grew up around PBA stars like Cyrus Baguio, Sonny Thoss and his Ninong Ranidel De Ocampo and started playing the game with much older men in their neighborhood in Las Pinas.

Now that he is 6-9 after growing five inches over the past year, dad has taken a more serious hand in his development.

[See Amid hoopla, Compton warns not to put too much pressure on teen Sotto]

This early, Kai is showing some promise. Kai said he can already dunk the ball, though he hasn't tried it yet in a game. He also once scored 50 points in one pick-up game - his highest so far.

With the popularity comes the offers from teams. The young Sotto is now said to be eyed by the Ateneo Blue Eagles where he has joined the practices of the Eaglets at the Moro Lorenzo Gym.

According to people close to him, there is also interest from other schools like UCLA, where Kobe Paras is set to debut in the next US NCAA season under coach Steve Alford.

Sotto will also get a chance to play against kids his age when he plays a pick-up game in Manicani Island in Guiuan, Eastern Samar where he was invited as guest player in a Nickel Asia organized basketball league.

But without coaching from anyone, Kai knows exactly what he needs to do from hereon. 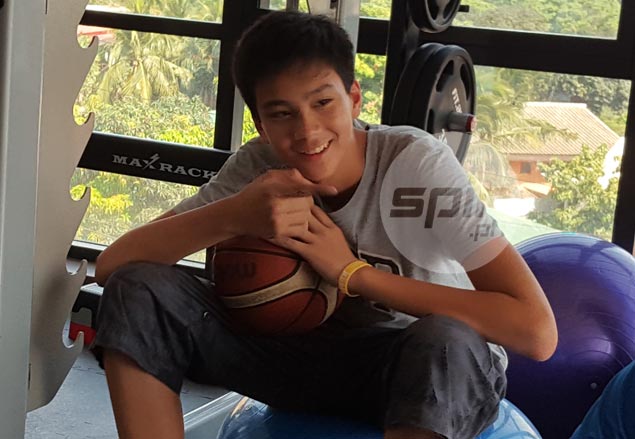