Johnny Juzang carries No. 11 UCLA past top seed Michigan and into Final Four

INDIANAPOLIS — Johnny Juzang poured in 28 points while playing most of the second half on a hurt ankle, and UCLA survived a series of nail-biting misses by top-seeded Michigan in the closing seconds for a 51-49 victory Tuesday night (Wednesday, Manila time) that made the Bruins the fifth No. 11 seed ever to reach the Final Four.

The Wolverines missed their final eight shots, including a 3-pointer by Mike Smith with a couple seconds left and another by Franz Wagner at the buzzer that sent the Bruins (22-9) flying off the bench in a wild celebration.

The team that backed into the tournament with four consecutive losses, needed overtime to beat Michigan State in the First Four and another overtime to beat Alabama was off to face overall No. 1 seed Gonzaga on Saturday night.

"These guys get all the credit," said UCLA coach Mick Cronin, who had never been to the Elite Eight much less the Final Four in 18 years as a college head coach. "Unbelievable heart, toughness. Nobody picked us. Nobody believed in us. That's how we like it. Obviously we know our next assignment is tough, but their resiliency is unbelievable."

After dictating the pace all game, eschewing the slick style of Michigan in favor of a rock fight, it only seemed fitting that the underdog Bruins would take it to the buzzer.

They were clinging to a 50-49 lead when Michigan called a timeout with 19 seconds to go, intending to set up a final shot. Juwan Howard set up an open 3-point look for cold-shooting Wagner, who missed most of everything, and Eli Brooks also missed a put-back before UCLA was able to corral the rebound.

It was merely the start of a chaotic finish.

"We worked extremely hard this year, coming down to one possession -- that's how it goes sometimes in the game of basketball," Howard said. "There's one or two possessions that can either help you or hurt you and for us, we came up short."

The Wolverines quickly fouled and sent Juzang to the line, where he missed the second of his two free throws with 6.3 seconds left. Michigan grabbed the rebound and called another timeout, and Howard had Smith race up court and unload a good look from the wing that was halfway down before bouncing back out.

The buzzer sounded but the officials halted the Bruins' celebration, putting a half-second back on the clock.

That was enough time for Michigan to inbound one last time to Wagner, who again let fly a 3-pointer that clanked off the iron — and finally gave the Bruins freedom to spring from their benches for their first Final Four trip since 2008.

"I've been trying to teach these guys how to win. Winners know why they win," Cronin said. "They don't worry about offensive struggles. They believe. They just keep defending, keep playing with heart, keep playing with toughness."

Hunter Dickinson led the Wolverines (23-5) with 11 points, but nothing came easy for the Big Ten freshman of the year — or anyone else in maize and blue. They were 3 of 11 beyond the arc, shot 39% overall and couldn't make the shot at the end.

The No. 1 seed in the East Region had confidently strolled onto the court about 30 minutes before officials even rolled out balls for pregame warmups. The Wolverines almost looked bored as they milled about, some listening to their music, others catching glimpses of the Southern California-Gonzaga game on the screens hanging over the court.

The Bulldogs won so easily it must have lulled them to sleep.

Instead of the crisp passing, unselfishness and eye-pleasing positionless basketball that carried Michigan to three easy wins in the tournament, there was sloppy ballhandling, off-balance jumpers and breakdowns on defense.

Then there was Juzang, who scored 14 of the Bruins' first 16 points. Whether it was a step-back 3-pointer, floater in the lane or drive to the bucket, one of March's breakout stars simply willed UCLA to a 27-23 halftime lead.

The Bruins quickly stretched it to 34-25 before Juzang twisted his right ankle during a rebounding scrum, sending him to the bench to get it taped. He was only out a couple minutes, but Michigan took advantage. Dickinson and Brooks each had back-to-back baskets, wiping out most of UCLA's hard-earned lead. 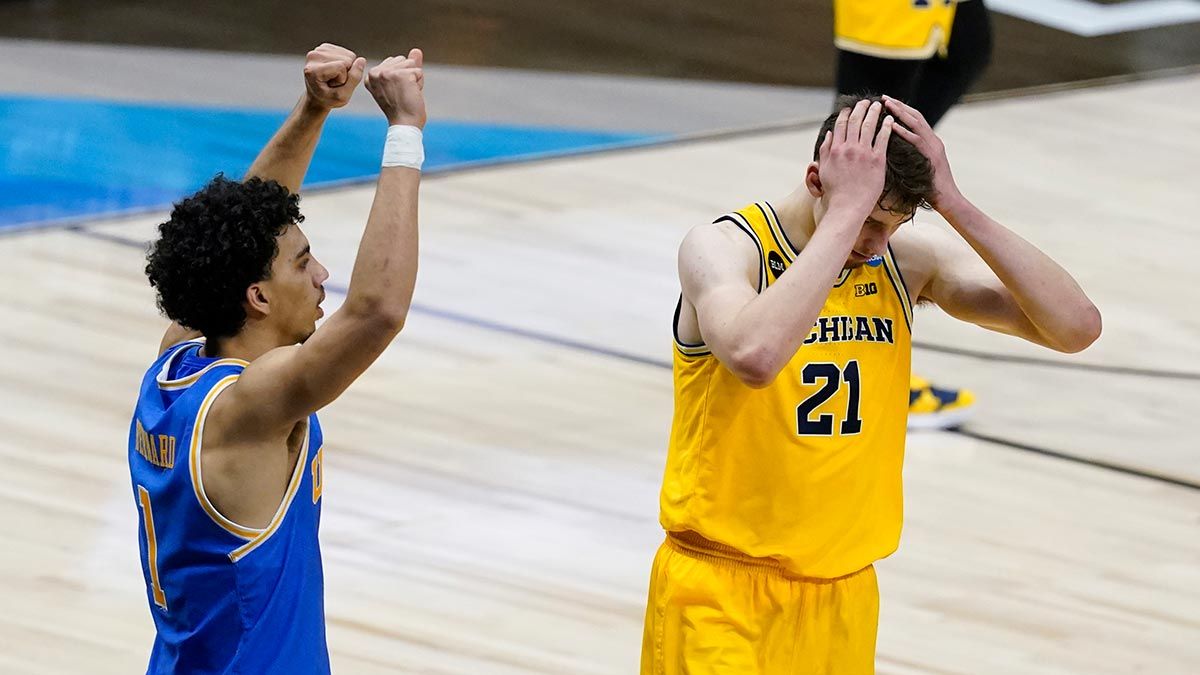 Gonzaga has won two of three against the Bruins, though they've split their two meetings in the NCAA Tournament. UCLA won a regional semifinal in 2006 and the Bulldogs returned the favor in the 2015 regional semifinals.