JUNE Mar Fajardo guaranteed his commitment to play for Gilas Pilipinas anew, saying he’s more than willing to embrace the role as one of the ‘elders’ to a relatively young core of national team members.

Fajardo showed up for the first regular Monday practice of the national training pool at the Meralco gym just a day after arriving from Cebu, where he spent a large part of his break after leading San Miguel to a three-peat in the PBA Philippine Cup Finals.

While he was in street clothes and didn’t join the team in its shooting drills and halfcourt sets, the 6-10 big man's presence is proof of his total support in Gilas’ cause.

“Suporta sa team kaya nandito tayo,” said the three-time PBA MVP, who failed to join Gilas during its three-day training camp in Tagaytay as he had to take a short vacation in his hometown in Pinamungajan, Cebu after the series win over Barangay Ginebra.

Although only 27, Fajardo is now considered among the veterans in the 24-man pool, half of which is composed of cadets, most of who calls him ‘kuya.’

But he’s not complaining, adding he’s ready to take on such responsibility.

Fajardo joined fellow big man Japeth Aguilar at the sidelines, but said both of them will start practicing with coach Chot Reyes and the rest of the team Monday next week. 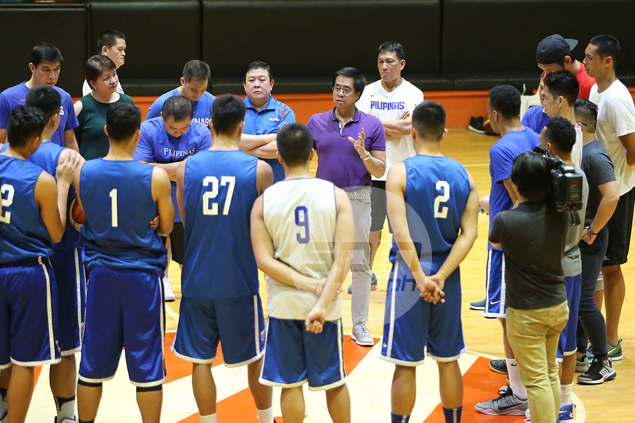 He and Aguilar, along with Jayson Castro are the only remnants of the Gilas team handled by Reyes that finished runner-up to Iran when the country hosted the FIBA Asia Men’s Championship in 2013.

Fajardo is ready to take on the mantle of leadership along with Castro as they lead this latest batch of Gilas vying for a return trip to the Fiba World Cup set in China in 2019.