SPOKANE, Washington — Every summer they converge on Seattle at some point, a mix of the occasional pros, some college players with connections to the area and even some high school standouts.

The destination is the summer pro-am run by former NBA star Jamal Crawford. And after Gonzaga’s Chet Holmgren made his first visit this past summer, Crawford was quick with some lofty praise.

“It was unreal to see a unicorn in real life!” Crawford tweeted in August. “Chet Holmgren is special.”

Fast-forward three months and as much as top-ranked Gonzaga might be downplaying all the “unicorn” talk, it’s clear Holmgren is a special talent unlike any that’s come through the Bulldogs’ program. 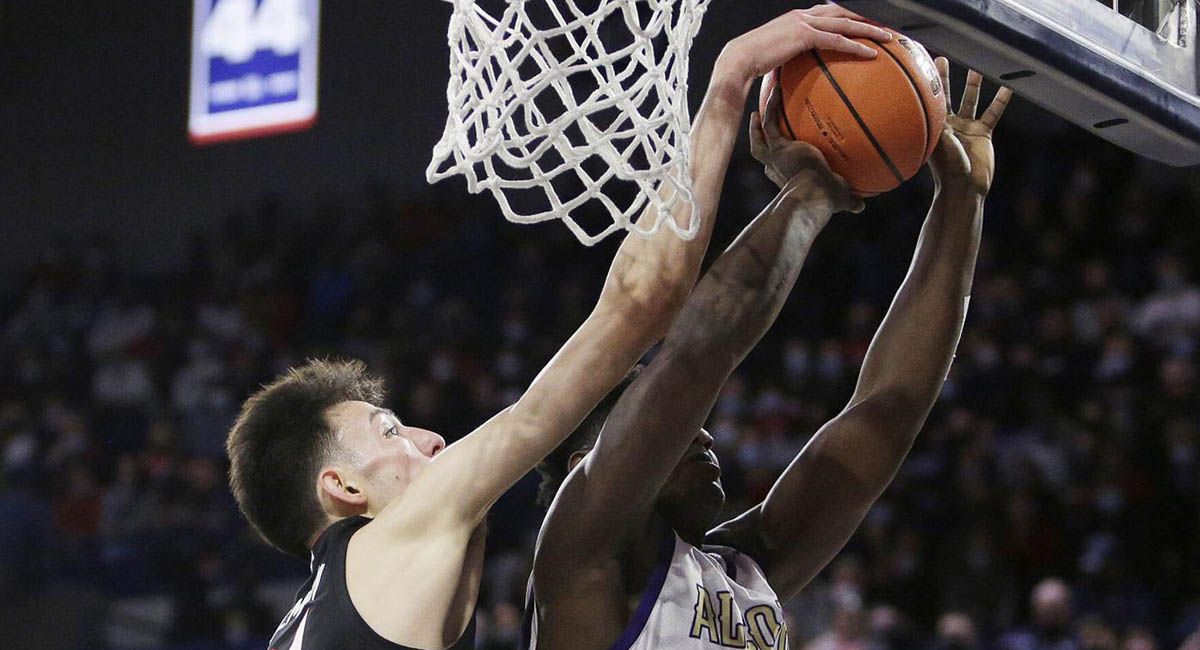 Holmgren is a 7-foot freshman with the ballhandling of a wing, the court sense of a point guard and the length and athleticism of a dominant interior force.

And the biggest stage of his young career is this week as the Bulldogs travel to Las Vegas for a trio of games, highlighted by Tuesday’s Final Four rematch against No. 2 UCLA and Friday’s clash against No. 7 Duke.

The matchups in Las Vegas will feature some of the top players in the country. But the most unique talent on the court is going to be Gonzaga’s freshman star.

“We are going against the top of the top. We’ll see what we’re made of,” Holmgren said.

While Gonzaga’s profile has rapidly grown over the past decade, the past few years have changed its scope on the national scale because of the caliber of recruits the Zags have landed. It started a year ago when Jalen Suggs played his one year of college ball for Gonzaga and continued when his close friend followed him to Spokane.

But Holmgren coming to Gonzaga was a step up even from Suggs — the No. 1 recruit in the country choosing the school 1,400 miles to the West.

“Their willingness to work and to be a part of what we’re all about here is hugely important to us,” Gonzaga assistant coach Brian Michaelson said. “And that’s why we are selective with those types of guys that have that type of one-year talent because they have to fit what we do.”

While Holmgren’s unique size immediately stands out, his new teammates see other aspects of his game that are just as critical to his success.

“I think just his IQ and versatility. He sees the game really well. He sees the whole court, not just a part of it,” Gonzaga forward Drew Timme said. “The way he gets to his actions and what he sees on court and find his teammates at his size is something we never really see.”

“He’s really invested into getting better, and he’s not just one of those guys who just lives off his height,” added teammate Andrew Nembhard. “He wants to keep getting better and has something to prove. That’s what I like about him.”

One person who would like to temper some of the hype — and the “unicorn” comments — is Gonzaga coach Mark Few. Few has cautioned patience with the freshman knowing the level of the expectations that would follow.

“I think everybody just needs to be really patient with Chet,” Few said. “He is extremely skilled and really, really smart, and a worker. He’s still in the process, he’s having to adjust because of his body. It’s so unique and he’s in the process of adjusting to just how physical this game is and how to find success with that physicality that’s around.

“I think everybody kind of regurgitates some stuff and maybe they really haven’t seen him that much. That’s what I would say.”

But Few also understands that talents like Holmgren don’t come around often and with the understanding that his time at Gonzaga is likely to last only one season. It’s a matter of utilizing his skills in the most optimal way on a team that’s loaded with talent.

Thus far, Holmgren seems to be finding his way just fine. The competition for Gonzaga has been rather pedestrian so far with the exception of its convincing victory over Texas when Holmgren found himself in foul trouble and played only nine minutes.

“He’s a once in a generation talent. I mean, the stuff he can do at his size is unreal,” Timme said. “It’s been a lot of fun to play with him and do different actions. I think we complement each other really well.”