LOS ANGELES — Francesca Belibi saw the open court and no defenders in front of her. Teammate Anna Wilson told her she was good to go, so Belibi stormed the paint and dunked, delighting her Stanford teammates.

"I was going crazy," freshman Cameron Brink said. "I had to remember I had to get on defense. She brings so much energy for us and that was a big moment."

Belibi finished with 15 points and seven rebounds, helping No. 1 Stanford survive its closest game of the season to beat 10th-ranked UCLA 61-49 on Monday (Tuesday, Manila time) and remain undefeated.

The Cardinal was leading by five points when Belibi dunked early in the fourth quarter, a week after becoming the first woman to do so in a collegiate game since former Baylor star Brittney Griner in 2013.

"Definitely wasn't thinking about time and score," Belibi said. "If I had remembered, I would have shot a layup and made sure we got the points." 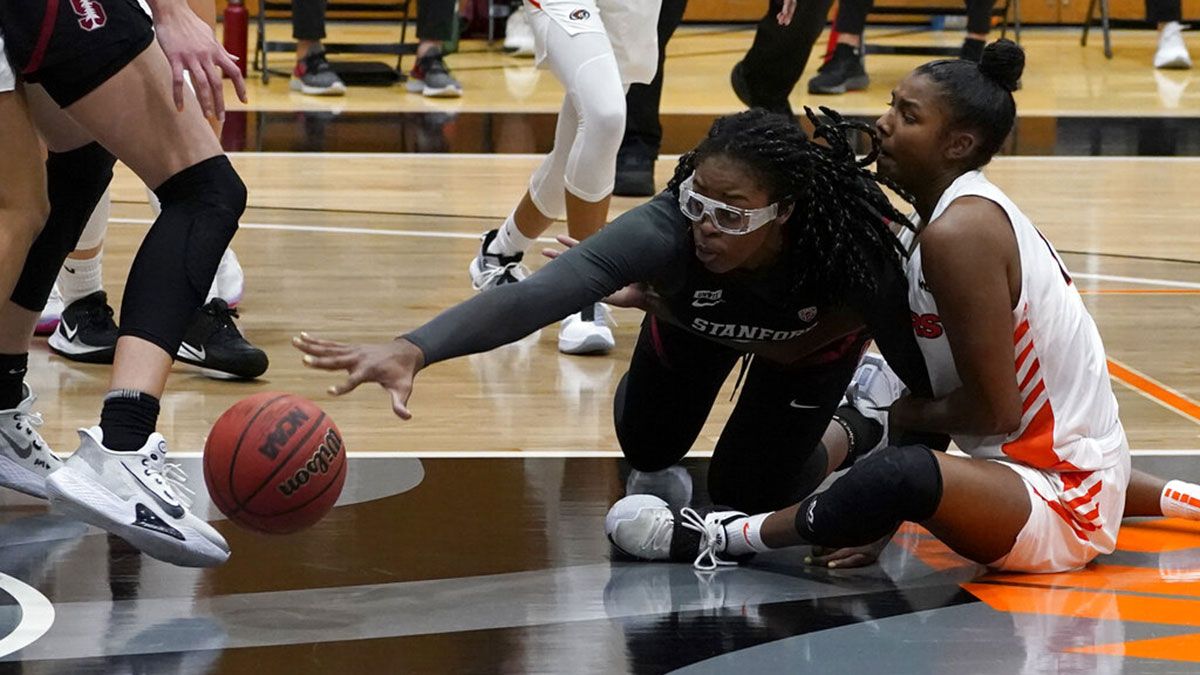 Cardinal coach Tara VanDerveer said: "Glad she made it because we needed that basket. Gives our team a lot of energy and it's exciting for the fans watching."

Brink added 10 points and nine rebounds for the Cardinal (7-0, 4-0 Pac-12). Kiana Williams had 10 points and was one of four Stanford players with four assists.

Stanford cruised past its first six opponents, winning by a whopping 48.2 points per game while scoring an average of 93.2 points.

But the Cardinal got tested against the Bruins, who took a one-point lead in the second quarter, trailed by six points in the third and didn't fall behind by double digits until late in the fourth, when Stanford outscored UCLA 18-12.

The Cardinal scored its fewest points of the season and committed a season-high 16 turnovers.

"We were within arm's reach for most of the game," UCLA's Michaela Onyenwere said. "I'm proud of our fight, but I know we can learn so much from this game."

"Some of those 3s were not 3s in rhythm that we create as a team. They were more panic 3s," UCLA coach Cori Close said.

UCLA got to 47-43 in the fourth on a 3-pointer by Lindsey Corsaro. Williams made 1 of 2 free throws before Brink scored six points in a row to extend Stanford's lead to 54-45.

In the second quarter, the Bruins outscored the Cardinal 14-4, including six by Onyenware, to take their first lead of the game, 26-25. The Cardinal regrouped and scored six consecutive points to lead 31-26 at halftime.

"For a long part, we played pretty well," Bessoir said. "We just got to clean up our mistakes."

Stanford: The itinerant Cardinal is headed back to Northern California but not home, having finished off a key stretch. VanDereer became the winningest coach in women's basketball last Tuesday, passing the late Pat Summitt with her 1,099th victory. She picked up two more wins in Los Angeles. The team has held its first seven opponents to 40% field-goal shooting or worse while having four games either postponed or canceled due to COVID-19 concerns.

UCLA: The Bruins moved back into the Top 10 on Monday. Their only losses so far have come against ranked teams, including by three points to then-No. 7 Arizona.

UCLA has added some depth to its bench and the newcomers never complain about a lack of playing time. Two stuffed bears sit in the last row with mini basketballs between their legs. They wear passes around their necks and black masks. Because of the coronavirus pandemic, no fans, cheerleaders or mascots Joe and Josie Bruin are allowed in Pauley Pavilion. "We need all the bodies we can get," Onyenwere said. The Bruins have just seven players available; others are stuck overseas due to U.S. government travel restrictions involving COVID-19. The bears were intended as a toy drive donation but were deemed unacceptable because they weren't bagged, Onyenwere said.

Both teams played their final game of the year. The Cardinal has five days off and will spend the Christmas holiday in a hotel outside of Santa Clara County, which has banned contact sports. The Bruins also are taking days off, and some players' family members will be able to see them after undergoing COVID-19 testing. "We were not allowed to let them leave the city or go home. I can't even explain all the protocols that have gone into making this a safe environment," Close said. "They need a mental break. This has been really difficult."

UCLA: The Bruins are off for nearly two weeks before visiting Oregon State on Jan. 1 in their second Pac-12 road trip. They split their first in Arizona.