What's next for Gilas in second round of Fiba World Cup qualifiers? Read on

WITH the thrilling win over Japan on Sunday, Gilas Pilipinas marched safely into the second round of the 2019 Fiba World Cup Asian Qualifiers.

But the path only gets more dangerous as Gilas plots a return to the World Cup.

Along with Group B leader Australia (4-0), Gilas (3-1) advanced to the second round with one more window to play in the first round of the qualifiers — an away game vs Chinese Taipei on June 29 and the July 2 rematch with Australia at the Philippine Arena.

Regardless of the results of both games, Gilas and the Boomers will carry over their records into the second round of the qualifiers as part of Group F, where two more teams from the first round have already qualified as well in Asian powerhouse Iran (3-1) and Kazakhstan (3-1).

After a shock loss to Iraq to start off its qualifiers campaign, Iran called back Samad Nikkhah Bahrami to reunite with Hamed Haddadi in dominating their foes in the second window with an average margin of 25.5 pts. Kazakhstan has also proven its mettle so far, suffering its only loss to Iran in the second window. 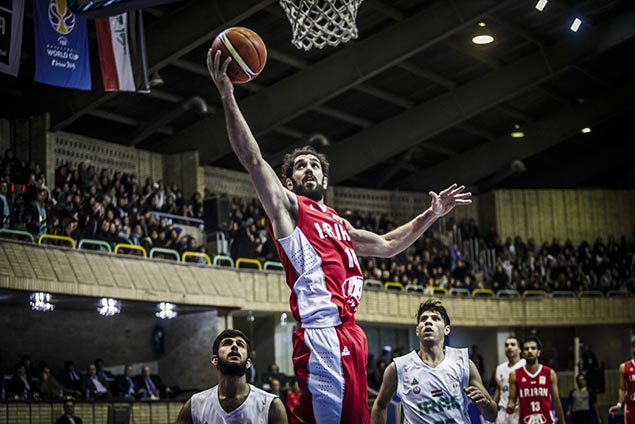 Two more teams are needed to complete Gilas’ Group F opponents in the second round. Despite being winless four games so far, Japan can still come up with a miracle with a sweep of its games in the third round—an upset over Australia on June 29 and its final first round meeting with Chinese Taipei on July 2.

Chinese Taipei automatically qualifies for the second round with a win over Gilas and a Japan loss to Australia on June 29. But if they lose and should the Japanese team deal the Boomers their first taste of defeat, that July 2 showdown will decide the last Group B squad to qualify to the next stage between Japan and Chinese Taipei.

In Group D, Iraq and Qatar have identical 1-3 records but the latter has the tougher road with a date against Iran on June 29. Should both Iraq and Qatar come up with wins in the opening matches of the third window, their July 2 duel will turn into knockout duel for a place in the second round.

In the second round, Gilas will again go through the similar home-and-away, three-window format — with games slated in September 2018, November 2018 and February 2019. Gilas and the rest of the Group B cast (Australia and either Chinese Taipei or Japan) will only battle opponents from Group D (Iran, Kazakhstan, and either Qatar or Iraq) on this stage.

After the three windows in the second round are played, the top three teams of Group F as well as the three best squads in the other bracket (Group E) get their place in the 2019 Fiba World Cup in China.

Meaning, to automatically book a return trip to the World Cup, Gilas has to finish at least third in a group that now has Australia, Iran, Kazakhstan and two teams out of Iraq, Japan, Chinese Taipei and Qatar. It sure looks doable on print, but stranger things can happen in the game of basketball. 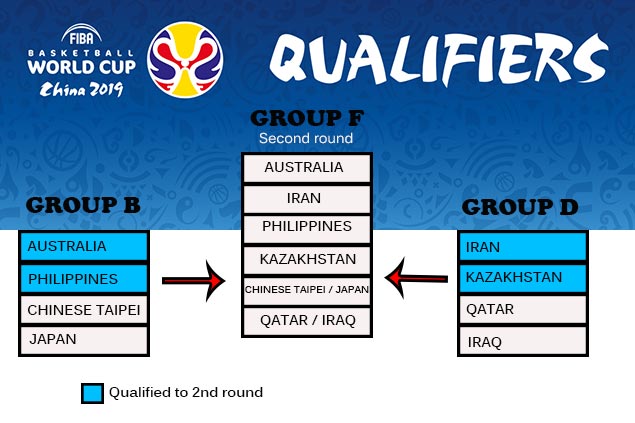 If Gilas ends up fourth in Group F in the second window, the Philippine team will face the fourth best team in Group E for the right to qualify to the World Cup — that is if China fails to make the cut among the top four squads of the second round in the other bracket.

If China, already qualified for the 2019 World Cup as host of the tournament, ends up in the top four of Group E, the fourth place team in Group F also earns a trip to the World Cup.

Watch this video as guide for the Fiba World Cup Asian qualifiers: