GILAS Pilipinas gets a stern test right off the bat in the 2017 FIBA Asia Cup. And oh, Chot Reyes and Co. have their job cut out for them.

The Filipinos battle defending champion China on Wednesday night (6:30 p.m., Manila time) in an early face-off between the two teams that battled each other for the gold medal in the last edition of the meet two years ago.

Gilas and China have both been bracketed in Group B, along with Qatar and Iraq to pave way for the premature clash between the two most accomplished countries in the 57-year history of the biennial tournament formerly known as the FIBA Asia Men’s Championship.

Each team won’t have their best players from the championship clash of 2015, when the Filipinos and Chinese engaged in a tense, highly-physical game played before a rowdy crowd at the Changsha, Hunan gymnasium, and won by the host, 78-67.

Yi Jianlian and Zhou Qi, who both suited up in the NBA, won’t be around for the reigning champions, but that doesn’t make the Chinese less formidable as the team will still parade a couple of 7-footers in Han Dejun and Li Muhao, and rising star Hu Jinqui, who at 19 years old and standing 6-foot-11, is being labeled as the future of Chinese basketball.

In the absence of Yi, adjudged the Best Player in the last Asia Cup, and Qi, big guard Guo Ailun is expected to lead the team this year especially after outplaying Jayson Castro – named two-time best point guard in Asia – during the championship game in Wuhan.

Those are not lost in the scouting report of Reyes’ coaching staff, noting China actually formed two competitive teams divided into China Red and China Blue. The Blue team of coach Du Feng is the one Gilas will be meeting on Wednesday at the Nouhad Nawfal Stadium in Beirut, Lebanon.

Proof how serious the Chinese are in their title retention bid, they were the first to arrive in the Lebanese capital out of the 16 participating teams.

“It’s not easy to find any stop-on on China,” added the Gilas coach, who imposed an ‘off-line’ rule for the entire team during the entire stretch of the August 8-20 meet. 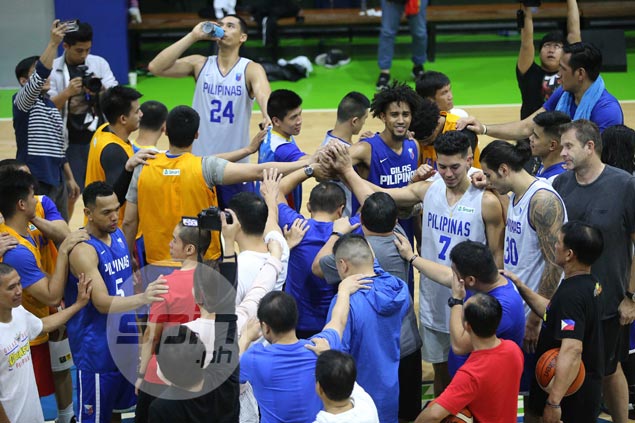 As if those dilemmas are not enough, Reyes also has to make do with the absence of his two big players in Andray Blatche and the injured June Mar Fajardo.

With both Blacthe and Fajardo orphaning Gilas, the Filipinos are left with 6-foot-9 Japeth Aguilar as their tallest frontcourt player, followed by a pair of 6-foot-7 newbies in Raymund Almazan and naturalized player Christian Standhardinger.

The team has an average height of 6-3 compared to China’s average of 6-7.

But Gilas hopes to compensate for its lack of height through quickness, not to mention good outside shooting and some experience on the side, with five players in Castro, Aguilar, Gabe Norwood, Terrence Romeo, and Calvin Abueva having seen action in previous Asia Cup campaigns.

As his way of lightening things up, Reyes found a way to make fun out of the situation

Meanwhile, action in the first day of the tournament that kicked off Wednesday saw host Lebanon downing Korea, 72-66, in the main game.

New Zealand had an auspicious debut in its Asia Cup foray by routing Kazakhstan, 70-49, so did former fellow Oceania campaigner Australia, which blasted Japan, 84-68.

Chinese-Taipei was the other first day winner with a 77-62 beating of Hong Kong.