TAIPEI - National coach Tab Baldwin said he never thought for a moment that his Gilas Pilipinas players would back down from the physicality of Russian side Spartak Primorye on Tuesday afternoon.

"Otherwise they would have to confront me," Baldwin said.

Coming from a country where rugby union is the No. 1 sport and the mighty All Blacks are kings, Baldwin had no problem with the physical play and skirmishes that marred Gilas' 85-71 win over the Russian side in the 37th Jones Cup basketball tournament at the Xinzhuang Stadium.

“This kind of skirmishes can also help as it toughens the team and also learn that every team they play has different styles. Like with this Russians, very physical but Gilas found a way to win. This Russian team came to win (3-0 before this game), and defeating them says a lot." - tuffgong

Barely two minutes into the match, Sonny Thoss suffered a cut in his head that required five stiches to close after getting hit by an elbow from a Russian player while Terrence Romeo was hit with a ball in the face during a skirmish that emptied both benches late in the first quarter.

All in a day's work, Baldwin said.

"It was a hard-fought game," the American-New Zealander said when asked by Taiwanese media about the scuffles on the floor. "I mean there were some casualties, but it was a tough basketball game."

"They (Russians) were a tough team, and it has been established in this tournament that they're a physical team, and they didn't wanna lose. So we were ready for that.

Baldwin said Thoss wanted to get back in the game after getting treatment from medics inside the venue. But the team physio put his foot down, he added.

"If it was rugby, we would've allowed him to play," he said.

Still, the two coaches had to talk at halftime to calm the nerves of the players. They agreed to keep it clean.

Spartak coach Eduard Sandler, however, had a beef with the referees, accusing the officials of letting the game get out of control after allowing players to get away with cheap shots early on.

He told the media the officiating "was unacceptable." 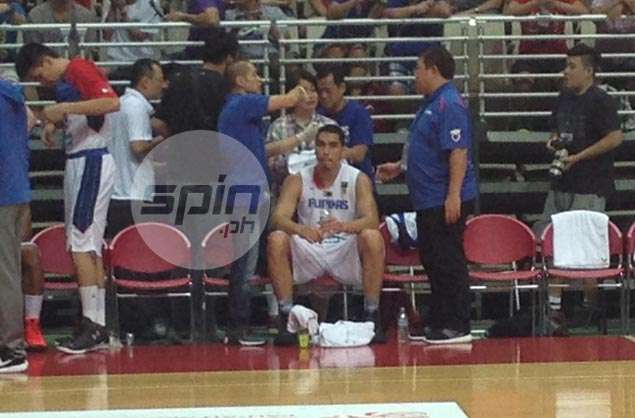