CHANGSHA, China – The Samahang Basketbol ng Pilipinas (SBP) is concerned on whether it could form a competitive team for next year’s Olympic Qualifying Tournament, especially with the tournament running in conflict with the season-ending conference of the PBA.

SBP vice president Ricky Vargas said the federation will definitely discuss the dilemma in the coming days upon Gilas Pilipinas' arrival in Manila on Monday following its runner-up finish in the 2015 Fiba Asia Championship.

By placing second to champion China, the Philippines earned a slot to compete for Olympic berths in one of the three July 4-10 tournaments to be held simultaneously in three key cities around the world.

“We (SBP board) still need to talk about that (Olympic qualifier),” said Vargas, who left for Manila along with SBP president Manny V. Pangilinan on board a private jet the day after the Gilas-China title match.

“We want to, but the thing here is if we can form a competitive team,” he added. “There’s a lot of scheduling problem; at that stage, the PBA is ongoing.”

The Olympic qualifiers are set a month before the Olympics, with 15 of the best teams that failed to gain outright Olympic slots, including the Philippines, slugging it out for the three remaining berths in the Summer Games. Also gaining berths from Asia are semifinals Iran and Japan.

In all, 18 countries will participate in the meet including the three host teams.

But while more Olympic slots will be at stake, the tournament also features some of the world’s traditional cage powers such as Serbia, France, Greece, New Zealand, Canada, Mexico, and Puerto Rico, among others. 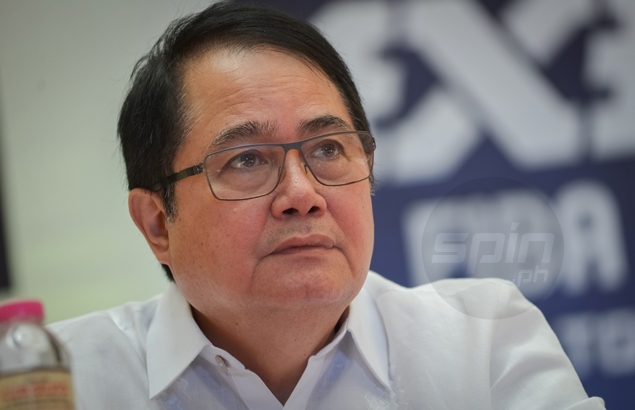 The PBA is set to unveil its 41st season two weeks from now, and unless it revises its schedule at the last minute, the Rio De Janeiro qualifying meet will be held at a time when the playoffs of the season-ending Governors Cup will be ongoing.

The league board headed by president Chito Salud and chairman Robert Non of the SMC group were in this city to support Gilas in its bid to make it back to the Olympics for the first time since 1972.

On the day of the Gilas-China finale, both PBA officials reiterated the league's willingness to adjust the season calendar if only to give the national team a longer preparation time for future international competitions.

“We can even go farther if we are able to prepare earlier with the right mix of players playing under a system for a good period of time,” said Salud.

“Definitely, the PBA will have to make changes in schedule. We’re ready to make a change. We just have to know ano yung sked na ‘yun,” Non echoed.

Vargas, however, didn't sound convinced, recalling the PBA made the same commitment prior to the Fiba Asia Championship where Gilas was hit by the unavailability of players initially targeted by national coach Tab Baldwin.

“I think what they meant is if the compliance on schedule is only giving us two months to prepare,” said Vargas.

Gilas Pilipinas trained for less than two months for the Fiba Asia meet as the league cramped its three-conference schedule last season by holding games five times a week.

Vargas also cast doubt on the PBA's vow of support, saying league officials are powerless to commit players to the national team.

“I think the PBA (Commissioner’s Office) has actually no power in terms of allowing players to Gilas,” said Vargas, who once served as league chairman. “At the end of the day, it’s still the team owners who decide if they’ll lend the players to the national team.”

The Talk ‘N Text board of governor added, “They (PBA office) can say they’ll adjust the schedule, that they’ll support the program of Gilas Pilipinas. Well, they have good intentions, but it’s hard to implement.”