DON'T be surprised if you see Jimmy Alapag once again in a Gilas Pilipinas uniform.

People close to the recently retired PBA star guard bared he is getting ready for a comeback in the wake of the withdrawals and unavailability of players to hit the national team bound for the 2015 Fiba-Asia men's championship in Changsha, China.

Alapag has joined Gilas practices since Wednesday and insiders say the 36-year old streak-shooting guard will likely make himself available for selection when head coach Tab Baldwin names his pool on Monday.

"Pinag-iisipan n'ya," a fellow player said of the former Gilas hero, who has taken on a dual role as team manager of Talk 'N Text and assistant coach of the national team since his retirement in February.

[See Alapag is Spin.ph Sportsman of the Year]

Alapag is almost certain to be part of the pool to be announced on Monday, but any comeback at this point at this point will be dependent on the point guards that will be made available to Gilas.

By the look of things, Alapag will be needed.

There are also doubts if other guards previously eyed by Gilas, like Star's Mark Barroca, Paul Lee of Rain or Shine, and San Miguel's Marcio Lassiter, will be made available to Baldwin.

Alaska's JVee Casio may be an option, but he is coming off an injury-plagued, below-par season with the Aces. 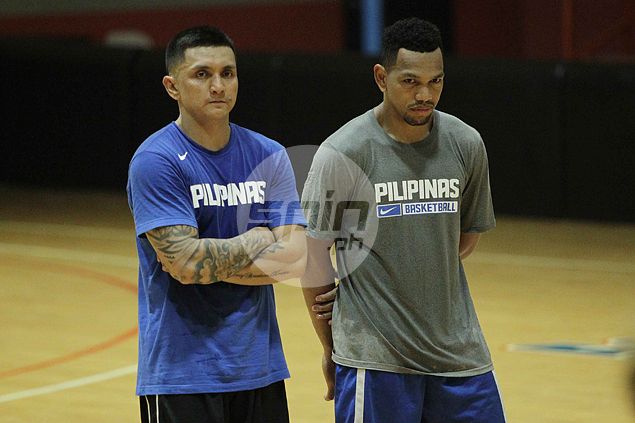 With an Alapag comeback imminent, the question now is on whether the 'Mighty Mouse' can regain the form that made him a key piece in the Philippines' campaign in the 2013 Fiba Asia and 2014 Fiba World Cup under former coach Chot Reyes, given the short preparation time for this latest incarnation of Gilas.

Well known conditioning coach Jimbo Saret believes Alapag can get back to top form between now and the China tournament kicking off on September 23.

“Jimmy can always play but the question is his condition. You have to compare kung sino kasabay niya at mga kalaban niya. The others can run full quarters, kaya pa kaya niya 'yun at this point?” said Saret.

“Ang problema kasi dyan kahit kundisyon siya, hindi na siya pwede bugbugin sa oras, kasi in the first place hindi naman magre-retire yan kung wala siyang nararamdaman. Pero Jimmy is a winner, he hates losing to the point that he’ll kill himself to give it his all,” he added.

Age will be a factor, Saret warned, once Alapag decides to buckle down to work.

“The only question now is can Jimmy still convince his body to cooperate, pero the body can always be trained. Nasa sa kanya if he really wants to play. Pwede niyang gawing Ferrari ulit yan. Knowing Jimmy, he is a fighter,” added the head training program director of the Philippine Olympic Committee.

“Kailangan mo ng back-up point guard kahit may Terrence Romeo at Jayson Castro ka na. Paano kung ma foul trouble yung dalawa?" he added. "He can play if he wants to. He is very capable of playing… and we are not talking about long minutes.”