NATIONAL coach Chot Reyes on Friday released a list of 23 young, upcoming players who he wants to see in the Gilas Pilipinas pool for the Fiba World Cup which the Philippines will co-host five years from now.

The list also included Fil-foreigners Remy Martin, Dwight Ramos, and Troy Rike, who have yet to play on local soil but have become popular among Filipino fans who have seen their videos online.

However, Reyes clarified that the list is 'by no means final.'

Listing the players by position, Reyes, who on Thursday also announced a separate 15-man pool for the second window of the 2019 World Cup qualifiers, named CJ Perez, Juan Gomez de Liano, Desiderio, Bolick, Nieto and Martin to his backcourt.

His choices for the wings aside from Paras, Ramos and Ravena were James Tuffin, Jeo Ambohot, JJ Alejandro, Joshua Sinclair, Arvin Tolentino and Javee Mocon while joining Edu, Rike and Sotto in the frontline are Isaac Go, Abu Tratter, Kenmark Carino, Will Gozum, and Karl Vincent Tamayo.

The new Gilas pool features a lot of youth and a really tall ceiling, as the bigs alone have an average age of 19 and an average height of 6-foot-9. 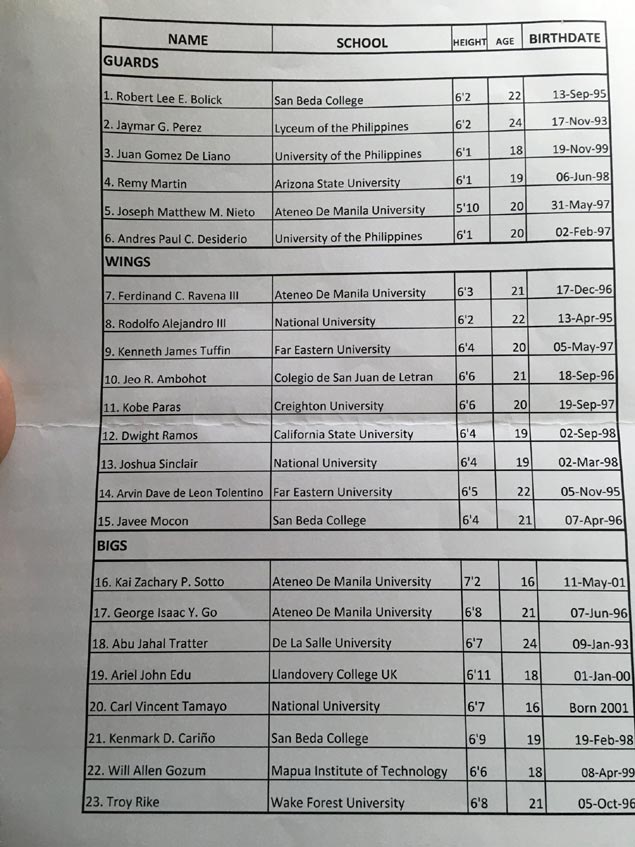