MCLAUDE Guadana completed a triple double as Batang Gilas continued to roll in the 2017 Seaba Under-16 tournament with a 96-73 win over Indonesia on Monday at the Smart Araneta Coliseum.

The pride of Lyceum Cavite churned out 19 points, 11 assists and 10 rebounds to lead the national youth squad in a fitting follow-up to its opening 104-82 win over Singapore on Sunday.

But the win wasn't as breezy as their opening win over Singapore as the Indons showed great resilience in the second half.

After falling behind 71-35 with less than five minutes to go in the third, Indonesia started putting up a spirited fight behind Felix Alexander and Darryl Sebastian.

The visitors never got closer than 20 points, but Batang Gilas coach Mike Oliver was clearly unhappy to see his players ease on the gas pedal with the game far from settled. 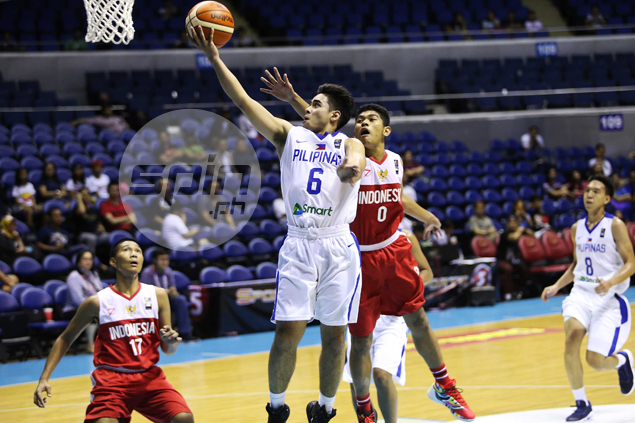 San Beda's Christian Calimag added 17 off the bench while Kai Sotto had 12 points, seven boards and two blocks for Batang Gilas, which takes a rest on Tuesday before taking on Thailand on Wednesday.

Indonesia, which dropped to 0-2, was led by the 18 points of Alexander.