KOBE Paras and older brother Andre used to tag along with mom Jackie Forster to watch games by dad Benjie Paras in the PBA back in the day.

Now it's Jackie turning up at ringside for his sons' games.

“I’ve never seen him play before,” Forster said in an interview with SPIN.ph on Tuesday night after the Gilas Pilipinas cadets' game against the University of the Philippines Maroons in the Filoil Flying V Preseason Cup at The Arena in San Juan,

“It feels nice. Even though this is not the big leagues that I used to watch, it’s nice to see especially because I’ve never seen him or my other son (Andre) play before,” she added.

Tuesday was actually the third time the US-based Forster turned up to watch Paras' game since the former actress, who is separated from Benjie, got reunited with her two sons after over a decade of separation. 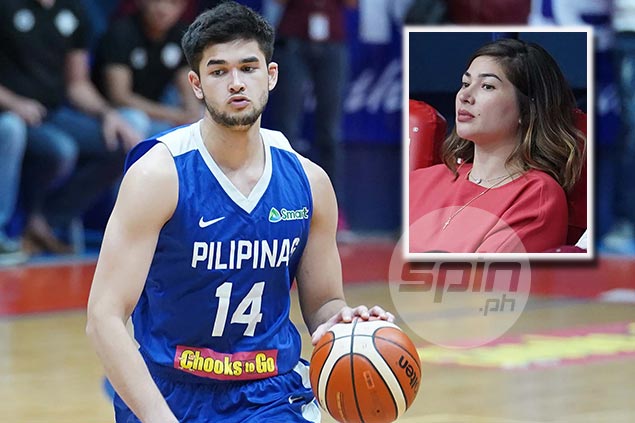 Paras was naturally thrilled to have his mom at courtside.

“It feels great. It’s my mom so it’s a normal thing. I’m just happy,” said Paras, who finished with eight points and made a nice gesture by pointing at his mom after hitting a three-pointer in the second half.

“Every time I score, I try to point at my parents. She was watching. If my dad was watching, I’ll point at him too,” said Paras.

Forster said she couldn’t contain her joy over Kobe's tribute.

Forster said she had been watching snippets of Paras’ games on social media, but nothing beats watching his son play in person.

“No matter what team he is on, I’m proud of him especially because in the past, nakikita ko naman and people would tag me videos and write-ups that he is doing a lot for the Philippines,” said Forster.

Forster said she is taking every opportunity to watch Paras play, and declined an invitation to watch Alab Pilipinas game against Mono Vampire in the Asean Basketball League (ABL) Finals.

“I had a ticket but I said I’m sorry, Kobe has a game,” said Forster.

The game didn't end well as the Gilas cadets blew a big lead and lost to the Maroons, 78-72, but Forster said she will keep turning up for every Paras game “for as long as I'm in the country.”

She is set to leave next week but hopes to catch more of the brothers' games.

“Obviously, I always want to be part of that but I wasn’t. But now, I am. I just feel like no matter what he is part of, it will make him happy,” Forster said.

“My husband is very supportive. If he travels around Asia, we can also follow him. For as long as there are people watching my kids or my kids can come, we will be there,” said Forster.