Kiefer Ravena the least surprised to see Thirdy step out of his shadows, spread wings

AFTER seeing Thirdy Ravena complete a five-man offensive simulation, Kiefer Ravena pulled his brother aside and pointed out a mistake the latter had done in the execution.

The elder Kiefer has probably done that to Thirdy countless times when they were together at Ateneo, not only being his senior teammate, but also being a big brother.

They were again wearing the blue jerseys on Monday night, but “Pilipinas” was written on their chests this time, with Kiefer being part of the 16-man pool for the team that’s preparing for the second window of the 2019 Fiba World Cup qualifiers next month, and Thirdy a member of the young 23-man pool for the 2023 edition that the country is co-hosting.

And Gilas practice at the Meralco gym marked their reunion as teammates, more than three years after they suited up together for the Blue Eagles.

“Basketball is a very small world; alam niyo naman 'yun,” Kiefer said. “You’ll never know who you'll encounter in your professional career once again. Hopefully, just being in the pool … just being in the same vicinity with Thirdy, it’s really kind of still new to me.”

Kiefer and Thirdy teamed up for just one season in the UAAP, before academic deficiencies prevented the latter from joining his big bro in his final year of eligibility.

No wonder Thirdy is savoring the reunion.

Now, the Ravena brothers will get to see more of each other on the court in the foreseeable future, more so if the 24-year-old Kiefer gets included in the 2023 pool.

“It’s something na I’ll get used to,” Kiefer said. “In the long run, whether sa 2023 pa sila makakalaro, dun pa ako makakasali, dun ko siya magiging teammate, it’s fine. I’m sure it’s gonna be worth the wait for me and my parents.” 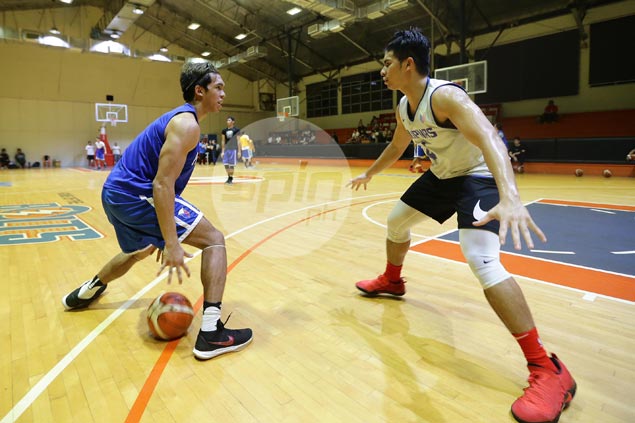 Kiefer has seen Thirdy step out of his shadows and make a name for himself as all-around player, to being Finals MVP after leading the Blue Eagles to the championship last year that proved to be his ticket to the Gilas pool.

“Honestly I wasn’t surprised,” Kiefer said. “It’s something that each and every one of them deserve. Him being part of the 23 for 23 is something he really worked for the last couple of years from playing in his rookie year, playing less – not the usual minutes, and then not playing at all. And then picking up where he was supposed to be on his sophomore year and then Finals MVP this past UAAP season.”