KAI Sotto has just served notice of his potential in his first major international tournament overseas.

Following his impressive showing in the recent FIBA U-16 Asian Championship in Foshan, China, the Filipino teenager has drawn comparisons with China's Hall of Famer Yao Ming.

The 7-foot-1 Ateneo standout emerged as the player with the highest efficiency rating by the end of the week-long meet that served as qualifier to the FIBA U-17 Basketball World Cup in Argentina, so much so the world’s governing body for the sport noted how Sotto has ‘caught the attention of everyone who saw him play.’

“It’s rare for a 15-year-old Asian to be his size, but it’s even rarer for someone his size to have the skills he has shown this past week,” FIBA noted in its article '10 Things We Learned in the FIBA U-16 Asian Championship' that came out of its website www.fiba.basketball.

“If his growth, development, and maturity don’t get derailed, Kai could be Asia’s next Yao Ming.”

The retired center is the 7-foot-6 basketball icon considered as the best player produced by Asia. He was selected No. 1 overall by the Houston Rockets during the 2002 NBA draft.

In 2016, he was inducted into the Naismith Memorial Basketball Hall of Fame.

Sotto has yet to reach Yao’s status, although his first foray in the tough Asian field saw him average 16.8 points, 13.5 rebounds, and 2.5 block shots per game. 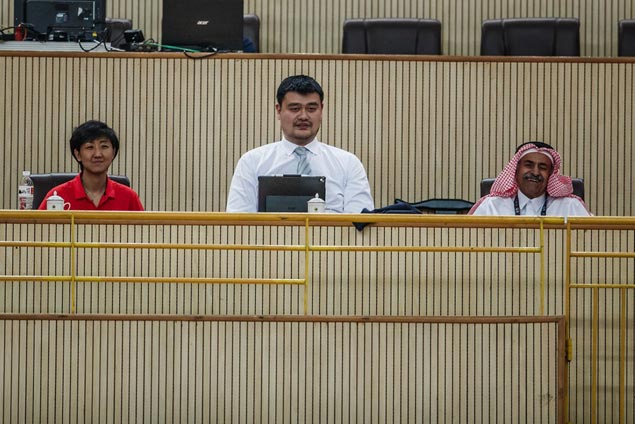 The son of former PBA player Ervin Sotto was a dominant force inside against China during the semifinals of the Asian meet, compiling 26 points, 21 rebounds, and six block shots in a Batang Gilas' 60-54 loss.

In the Filipinos’ thrilling 72-70 win over Japan in the quarterfinals that earned them a berth to this year’s World Cup, Sotto was just as impressive with 28 points, 21 rebounds, and two blocked shots.

The numbers make him a marked man come the World Cup in Argentina this July.

At 15, Sotto is also the youngest in the 23-man pool drawn up by coach Chot Reyes that will comprise the Gilas Pilipinas team for the 2023 FIBA World Cup to be held here.

As Fiba noted, the presence of the towering Sotto in the middle – and the presence as well of other young Filipino bigs such as Raven Cortez and Geo Chiu - had likewise transformed the Philippines from a guard and wing-oriented team to one that now relies mostly on post plays.

“Their sets were predicated on giving their bigs the chance to get the ball in the low block, which is something we’ve never seen before from them,” Fiba added.