IT has finally come down to this.

Judgment day dawns upon Gilas Pilipinas this week when coach Tab Baldwin makes the painstaking task of cutting the national training pool down to its 14-man roster before departing for a 21-day training camp in Europe.

The team will be leaving on Friday, by which time Baldwin would have already made up his mind on the composition of the final candidates for spots in the Gilas team that is set to do battle in the Manila leg of the Olympic Qualifying Tournament set July 5-10 at the Mall of Asia Arena.

A list of 24 names had been submitted by the Smahang Basketbol ng Pilipinas (SBP) to Fiba last month as part of the training pool for the six-day qualifier, 10 of which will be cut as Gilas goes to the final phase of preparation in its bid to make it back to the Olympics after a 44-year absence.

Three so far have officially backed out with injuries, namely Greg Slaughter, Paul Lee, and Matt Ganuelas-Rosser, while Moala Tautuaa is listed as the team’s second naturalized player, a last-minute option should any problem arise with top choice Andray Blatche.

Regardless of who remains, veteran guard LA Tenorio said everybody is deserving of a spot in the team, which began gathering for training as early as November.

A two-game series with three-time Fiba-Asia champion Iran will be held on Tuesday (closed door) and Wednesday, a crucial part of the team’s training that could help the players make a case for their inclusion in the official lineup. 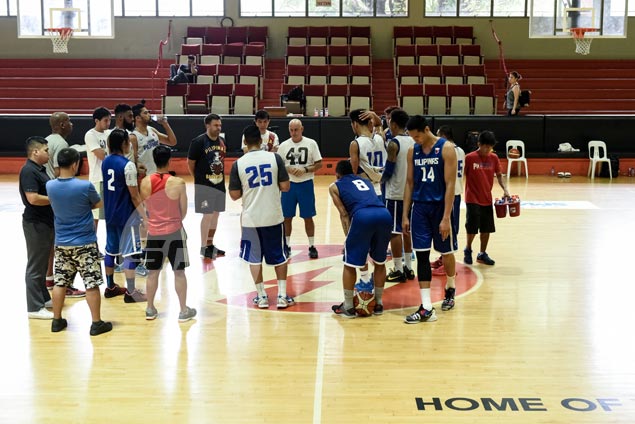 For good measure, Tenorio said all members of the team secured visas for their European trip that will take Gilas to Greece, Turkey, and Italy.

Gilas team manager Butch Antonio did confirm that only 14 players are coming to Europe for the training camp.

Of concern for Baldwin is Lassiter, arguably the best outside gunner of Gilas, who has not been attending practices of late as he has been showing bronchitis-like symptoms, according to the team.

As for him, Tenorio said its rest and then back with Ginebra if and when he doesn’t make the Gilas final cut.