GILAS Pilipinas completed a sweep of Pool B in the 2017 FIBA Asia Cup after holding off a late uprising from Qatar, 80-74, on Sunday before a crowd from a big crowd made up mostly of Pinoy fans in Beirut, Lebanon.

The hot shooting of the Philippines came in full display, led by the prolific marksmanship of Matthew Wright who scored 25 points on 7-of-12 shooting from rainbow territory.

The Philippines, assured of a quarterfinal spot after its third straight win, will now be waiting for the winner between Japan and South Korea which will be played on Monday.

Not even the absence of big man Christian Standhardinger, the early exit of Calvin Abueva and a brave stand from the Qataris could stop Gilas from completing a sweep of Pool B after victories over China and Iraq.

Unlike in their meeting with Iraq, Gilas went off to a fast start on the way to a 41-27 lead at the half - a lead that got as big as 20 points, 49-29, following a corner three by Gabe Norwood.

The Qataris, however, refused to go down without a fight as Mohamed Saad and Mansour El Hadary sparked a last-ditch comeback. 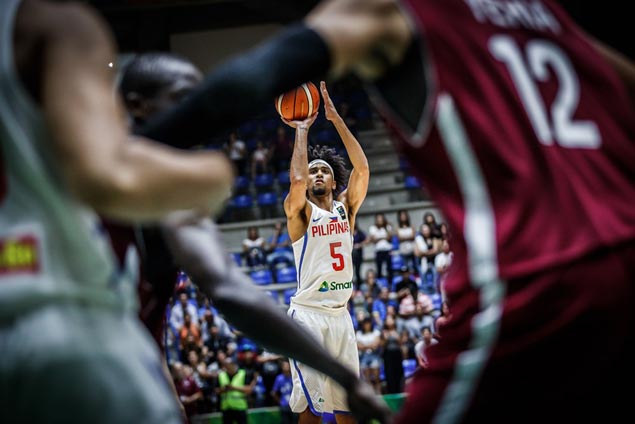 A lay-up by Abdulrahaman Al Muftah trimmed the lead to just five, 75-70 with 2:08 to go, but Wright had the perfect response as he drained his final three pointer of the night with 1:49 left in the game.

Carl Bryan Cruz continued his stellar play for the national team as he finished with 13 points anchored on three treys to highlight the Philippines’ stellar shooting from beyond the arc.

[See With Romeo misfiring and Standhardinger out, Gilas shows it can win with team ball]

The Philippines as a team made 15 of 42 threes, an impressive number considering that Terrence Romeo missed all of his six shots from the distance.

Romeo still finished in double digits with 10 points, while Gabe Norwood finished with the same output on points to go along with a team-high seven rebounds, five assists and two shot blocks.

El Hadary led the Qataris with 23 points and six assists as Saad added 18 points and 11 rebounds. The team finished the group phase winless in three outings.e, is also expected to be back in action.