GILAS Pilipinas shrugged off a slow start and a late scare as it turned back Japan, 89-84, on Sunday night to advance to the second round of the Fiba World Cup qualifiers.

The Filipinos erased an early 16-point deficit, maintained a comfortable cushion in the middle quarters, then withstood a late fightback by the Japanese to the relief of a jampacked crowd at the Mall of Asia Arena.

Jayson Castro sank the crucial floater that regained a two-possession lead for the Nationals while Troy Rosario and Kiefer Ravena gave a spark off the bench early on as Gilas got back on the winning track after a loss to Australia on Thursday.

With its third win in four games, Gilas also left the Japanese on the verge of elimination after keeping the visitors winless in four games in the home-and-away qualifiers for the 2019 World Cup in China

“We kind of expected we would struggle after that trip from Melbourne,” Gilas coach Chot Reyes said after his team came off an eight-hour flight where they lost to Boomers, 84-68. “That’s why, when we were down early, we didn’t panic.”

True enough, the bench gave them a lift as Rosario scattered all his 14 points in the first half, while Ravena added eight of his 13 markers in the first two quarters. Rosario scored 10 points in the second quarter, where Gilas led by as many as 15 points, 41-26, to complete a 31-point turnaround.

But it was Castro who brought Gilas home once again as 'The Blur' scored all his eight points in the second half, punctuated by the teardrop that gave them an 88-84 lead with 12 seconds left after Japan pulled to within two points. 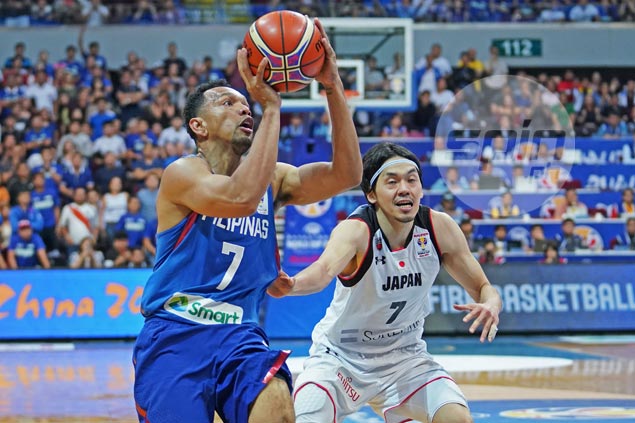 Andray Blatche put up his best offensive effort yet in this qualifiers as he finished with 18 points on top of 16 boards, four assists, two steals, and one block in 30 minutes as a starter.

Makoto Hiejima led the Japanese with a game-high 23 points on 8-of-11 shooting, along with four boards, two assists, and two blocks in 29 minutes that went for naught.

The Filipinos thus asserted their mastery of the Japanese following up their 77-71 win over the Japan in the first window last November.