THE worst fear of Gilas Pilipinas and its fans has come true.

On Wednesday morning, France, Canada and Turkey have been drawn to play in the Manila leg of the 2016 Fiba Olympic Qualifying Tournament, meaning the Philippines will need to hurdle the three powerhouse sides to earn a ticket to the Rio Summer Games.

Senegal and New Zealand join the four in what is arguably the toughest of the three qualifiers, the others to be held in the Italian city of Turin and Belgrade in Serbia.

Serbia is joined by the Czech Republic, Japan, Angola, Latvia and Puerto Rico in the Belgrade qualifier set from July 5-10 while drawn with Italy in the similarly tough Turin tournament are Greece, Tunisia, Iran, Croatia and Mexico.

France is the highest ranked team in the 18-team field for the qualifiers at No. 5 with a team expected to be studded with NBA stars like Tony Parker, Boris Diaw and Nicolas Batum. On the other hand, Canada, while ranked lower at No. 26, is set to parade a team led by Andrew Wiggins, Tristan Thompson and Kelly Olynk.

Turkey is also a formidable side ranked eighth in the world, bannered by Ersan Ilyasova and Omer Asik. And while Gilas beat Senegal in overtime in the 2014 Fiba World Cup, the African side can bank on a deep pool of tall, athletic players led by NBA veteran Gorgui Dieng.

The only break Gilas caught in the draw held in the Swiss city of Mies is that it landed in Group B of the Manila preliminaries with France and New Zealand, a team which has not had much success since now Gilas coach Tab Baldwin took it to the semifinals in the 2002 world championships.

Under the tournament format, Gilas, assuming France sweeps its preliminary matches, will need only to beat New Zealand to advance to the crossover semifinals.

Turkey, Senegal and Canada will make up Group A in the preliminaries, with only the champion team from Manila making it to Rio.

Based on the competition format released by Fiba, Gilas will draw a bye in Day One (July 5) when France and New Zealand face off before making its debut against the Kiwis on July 6. The Filipinos take on France the next day.

Here are the teams in the three qualifiers: 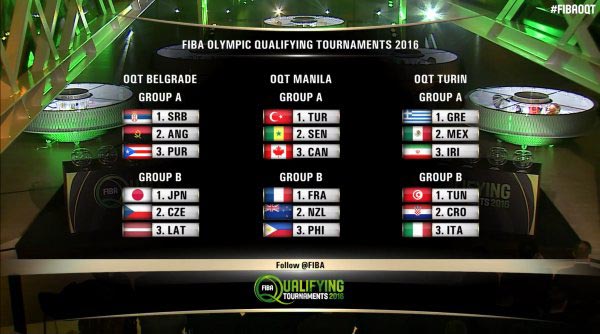