COMMENTARY: Gilas lured into fighting a tactical battle vs Korea that it just can't win

GILAS Pilipinas played its worst game in a while at the worst possible time.

On a high following a sweep of Group B in the 2017 Fiba Asia Cup in Beirut, Lebanon, the Philippine campaign met a disheartening end following a 118-86 defeat at the hands of longtime tormentor South Korea on Thursday morning (Manila time).

Predictably, Filipino fans who either stayed up late to watch the game or woke up to the sad news began dissecting the strange turn of events and were quick to blame a lot of factors, from the Koreans' torrid shooting to Gilas' defense - or lack of it - or the dreaded Korean jinx.

But at the end of the day, Gilas’ biggest undoing was dancing to the tune of the Koreans.

Sure, the Hur Jae-mentored squad played its best basketball in the tournament and there was only so much Gilas defense could do as the Koreans knocked down one three-pointer after another in a dizzying stretch in the second and the third quarters.

But the lack of physicality and intensity on defense, as evidenced by the team committing a grand total of four fouls the entire first half, definitely made them pay dearly.

Watching Terrence Romeo stand toe-to-toe against the entire Korean team in the second quarter was a sight to behold. But you readily know something was amiss when Gilas had to rely on 22 points - and six three-pointers - from Romeo just to stay within eight points of the Koreans, 57-49, at the half.

From that moment on, you know something was wrong somewhere.

And as if on cue, the Korean broke the game wide open in the third just as the Philippines went on a cold spell from the field, with its longtime nemesis outscoring the Filipinos, 29-13, to take an 86-62 lead entering the final frame.

The Koreans just couldn’t seem to miss from there while Gilas – who relied solely on Romeo’s offensive brilliance just to stay afloat – was left wondering what hit them when the Koreans started either denying or trapping Romeo at every possession. He never scored again.

When the dust settled, the Koreans came away with likely their most lopsided win against the country in a rivalry that has been one-sided in their favor. 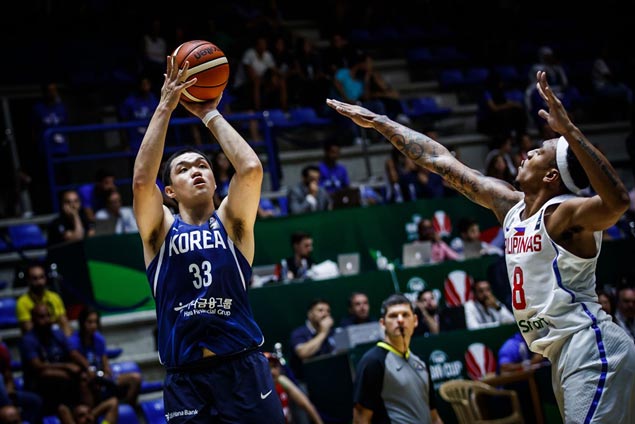 One need not look any further for the reason behind the heavy loss: the usual Gilas toughness on defense was visibly absent from the get-go.

The fact that netizens following the game on social media were almost wishing - even begging - for a scuffle or a hard foul to fire up Gilas was a good indicator that there wasn’t any energy at all on the defensive end for an otherwise talented Philippine side.

The Koreans picked apart Gilas' defense with machine-like precision, scoring almost casually on pick-and-rolls, pick-and-pops and almost any type of offense the legendary Hur Jae dug from his play book.

It wasn’t until early in the fourth quarter did Gilas finally push back. That was when Roger Pogoy gave Lee Seung Hyun a hard shove after a Korean inbound, resulting in a jawing match between Raymond Almazan and Kim Jong Kyu.

But by then, it was too late.

This Gilas team - which is known for its irreverent attitude on the floor and 'puso' mantra – no doubt plays better when the game gets a little too physical and the emotions at an all-time high. There was none of that on this dreary Thursday morning.

Instead, they were sucked into fighting a tactical match against a Korean team that’s not as athletic as Gilas, but is known more for its surgical precision, both on offense and defense.

Sadly, it was a battle Gilas can't win.