CHANGSHA, China – Samahang Basketbol ng Pilipinas (SBP) president Manny V. Pangilinan got a rousing welcome upon his arrival here on Thursday as Gilas Pilipinas advanced to the semifinals of the Fiba Asia Championship after an 82-70 drubbing of Lebanon Thursday night.

The patron of the national team was seated at ringside of the Changsha Social Work Colleges gymnasium and watched as naturalized player Andray Blatche and Jason Castro connived in the final quarter to put away a Lebanese side that simply refused to roll over and die.

“I’m grateful and I thank them for that,” said Pangilinan of the victory. “I’m relieved and very happy that we won. In the dugout, coach Tab (Baldwin) said this is not our best game and we could do better. I agree, but that said, a win is still a win.”

Up against Japan, a team which Gilas has fought and had beaten several times in the past, Pangilinan hopes the Filipinos won’t fall into the abyss of complacency.

“We really have to win tomorrow to make the Saturday final against Iran or China, both are very tough teams so they shouldn’t be complacent,” said Pangilinan, who was accompanied by SBP vice president Al Panlilio, Talk ‘N Text governor Ricky Vargas, alternate governor Patrick Gregorio, and Sports5 head Chot Reyes.

“But if they play well tomorrow night, we’re quite confident we can make it to the finals on Saturday.”

So happy was the PLDT and Smart Communications chairmanthat he said a nice incentive awaits the Gilas team.

“They now have a bonus, the first part of their bonus, “ a smiling Pangilinan said.

Pangilinan himself almost didn't make it to this city on time.

According to a Reyes tweet, the sportsman-businessman had to fly in a Filipino doctor to Hong Kong to have his knee drained so he can make the trip to Changsha. 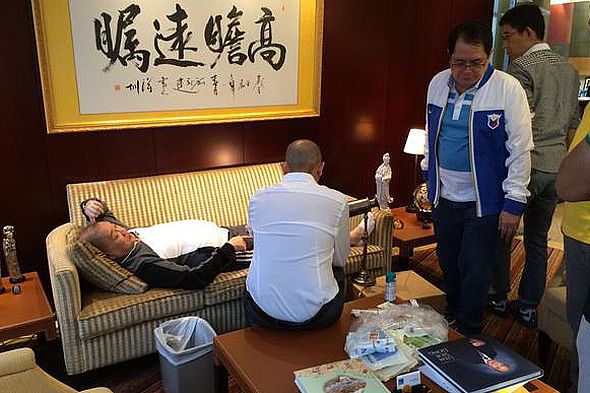