IN the eyes of Gilas Pilipinas 5.0 coach Josh Reyes, his young players passed their baptism of fire despite failing to make the quarterfinals of the Fiba Asia Challenge.

The young Gilas squad made up exclusively of former and present college standouts like Mac Belo, Kevin Ferrer, and Mike Tolomia among others, due to the unavailability of PBA players and top amateur stars, had a rude introduction to the big stage as the national team managed just one win in five outings in Tehran, Iran.

Reyes announced on his Twitter account Friday that the team is back from Iran, and he went on to thank top basketball patron Manny V. Pangilinan and other Samahang Basketbol ng Pilipinas (SBP) officials led by president Al Panlilio, Ricky Vargas and Sonny Barrios for the support.

In a separate post on his Twitter and Instagram accounts, the young coach praised his players for their "dedication, bravery and all-out effort" that may not have shown in their record but he clearly saw from the sidelines since the team’s formation.

“I just want to express how extremely proud I am of our young Gilas men who gave 100% of themselves through the whole campaign,” Reyes wrote. “They did everything I asked of them with the best of their abilities. They stood their ground, took the hits, and never backed down.”

“They squeezed every ounce of talent and fight they had from their bodies. That's PUSO. As their coach, I could not demand for anything more. They represented the country well,” he added.

Reyes also took the blame for their poor finish and wished he had done more as a coach to improve their performance. However, he ended his post optimistic that the experience was well worth it for the development of the Gilas Pilipinas program.

“I take full responsibility for our record and finish. How I wish I could have coached better to help the players even more,” he said. 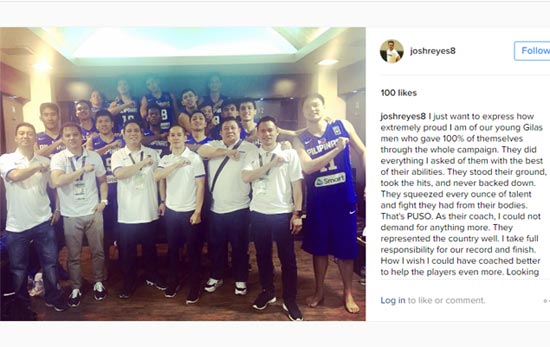