Ultras Filipinas crosses over to give Gilas infectious, football-style support in Seaba

JEROME Clemente often works the afternoon shift at a call center along Quezon Ave., usually taking off at 7 p.m. at the earliest. But on Saturday, the 27-year-old Malabon native clocked out early to make it to the Smart-Araneta Coliseum in time for Gilas Pilipinas’ game against Singapore that tipped off at 7 o’clock.

He and fellow like-minded people usually make that small sacrifice during football matches of the national team as members of Ultras Filipinas, one of the renowned and most organized booster squads in the country.

But on this night and the next few nights, they cheered at the top of their lungs not for the Azkals but for their basketball counterparts in the Southeast Asian Basketball Association (Seaba) Championship.

They cheer unconditionally, paying for their own tickets to watch the matches live. But this time, Clemente said he coordinated with Sports5 president Patricia Hizon, who gave the group complimentary tickets for the duration of the tournament. 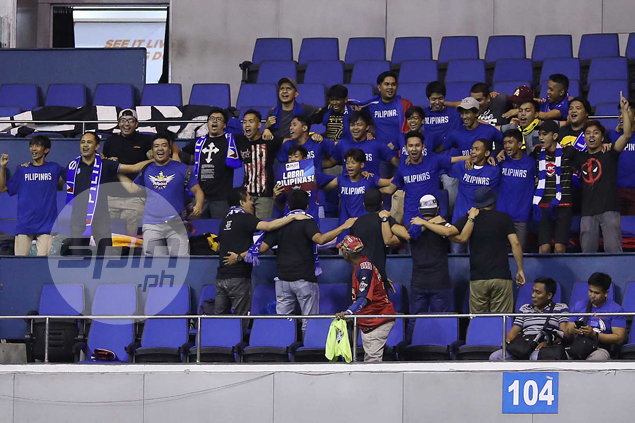 In the first three Gilas games, the Ultras Filipinas' infectious cheer brought life to dull, lopsided games. The group even starting human waves around the Big Dome, and turned on their flashlights that sway the rest of the fans to try it out as well, creating a daze firefly effect inside the venue.

The Ultras can go on and on, actually. They’re used to cheering for much longer as football matches run for ninety minutes almost without disruption, unlike basketball games where stoppages are common.

Their songs certainly sounded appropriate with Gilas as well, with their “Hala Bira! Ang bumangga, tiyak magigiba!” cheer aptly describing how the Filipino dribblers have bulldozed their way past the opposition so far, posting a winning margin of 69.6 points in the first three games.

One thing they like about cheering during basketball games is their voices are heard better compared to cheering at Rizal Memorial Stadium. 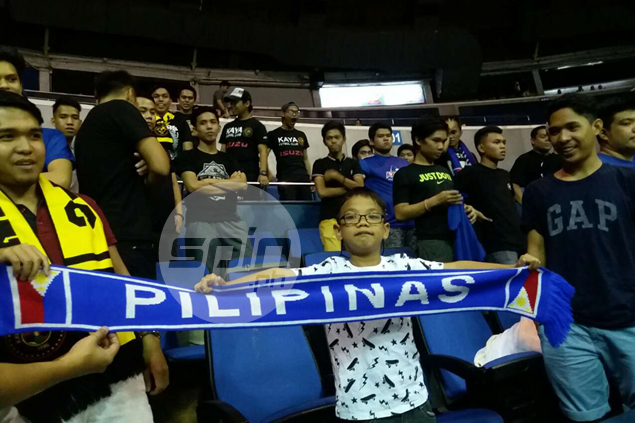 It's the more the merrier for Ultras Filipinas, which was why it welcomes people of varying ages and from different backgrounds, like Nathan Rojas, an eight-year-old Ginebra fan, who joined their cheers.

While they understandably get drained, Gilas stars are definitely getting more spring in their step with Ultras Filipinas egging them on.

Clemente, an Ultras member since 2011 and now one of the booster squad’s leaders, is hoping their support of Gilas would encourage hoop fans to do the same for football, still a growing sport in the country.