ON Tuesday, April 26, SM Tickets will begin selling tickets for the year’s biggest basketball event in the country — the 2016 Fiba Olympic Qualifying Tournament, where Gilas Pilipinas guns for a place in the Rio De Janeiro Olympics before home fans at the Mall of Asia Arena from July 5 to 10.

Since news came out that Fiba picked the Philippines to host one of the three OQTs, SPIN.ph has been receiving a lot of inquiries regarding tickets. The Samahang Basketball ng Pilipinas (SBP) later bared in a press conference the ticket prices for the said event as well as the process on how it will be made available to the public.

SPIN.ph now lists the five things fans need to know about the tickets, as per information from Fiba.com.

Where to buy the tickets?

Tickets can be purchased online at smtickets.com starting on April 26.

Season tickets, also called tournament passes, will be the first to be put on sale from April 26 to May 15, and that tickets for specific playdates will be available later.

A tournament pass entitles the holder to watch all the games — two games per day — for the entire five-day run of the competition. Tickets for the VIP section costs P47,000, patron at P39,500, and lower box at P31,500. The price doesn’t include ticket charges and government charges.

Gameday tickets will be sold starting May 16

Come May 16, tickets for the game days, also called single day passes, will be available.

Prices do not include ticket charges and government charges

For those who weren’t able to purchase tickets on the dates earlier mentioned, fans can still get their hands on tickets on the game day itself. According to the Fiba website, however, only a minimum of 500 single day passes for the general admission section will be available at the Mall of Asia Arena ticket booths.

To give you a clear idea on the location, here's the seat plan of the MOA Arena. 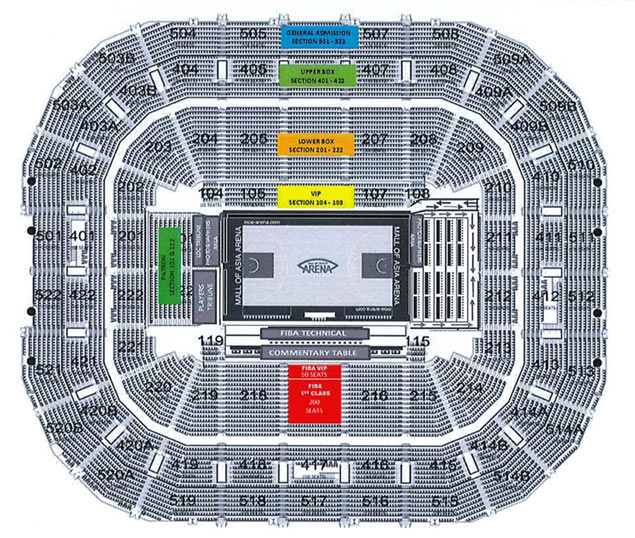