Embattled Chot Reyes thanks SBP head for vote of confidence

Reyes reiterated he will continue to do what he was asked to do by the federation, which is to be the head coach of Gilas Pilipinas in the lead-up to the 2023 Fiba Basketball World Cup after Tab Baldwin stepped down from the job.

Reyes also confirmed Panlilio’s statements that he had offered to resign as Gilas coach as early after the Southeast Asian Games in Hanoi after Gilas lost to Indonesia in the gold-medal game, but the SBP did not accept.

“First of all, huge thanks and real appreciation to president Al Panlilio for speaking up and reiterating the SBP support for the coaching staff,” said Reyes at the end of the PBA postgame press conference on Wednesday.

“Secondly, I think his main message was let’s all unite so that we can move together and have the best team possible for 2023.”

Reyes declined to comment on Panlilio’s statements about the events that led to him replacing Tab Baldwin as head coach of Gilas Pilipinas. In an interview with SEAG Live, Panlilio blamed Baldwin for the current Gilas predicament, saying the American-New Zealander coach didn’t want to handle the national squad in the February window of the World Cup qualifiers due to his commitment to Ateneo.

But Reyes admitted the coaching change entailed a period of transition, which he said is where Gilas Pilipinas is right now.

“I don’t wish to comment on that because as you know I’ve never said anything against anyone at all. I don’t know if anyone of you has heard me speak at all about anyone and it’s not my style. I would rather not comment on it except to say that we are doing our best,” said Reyes. 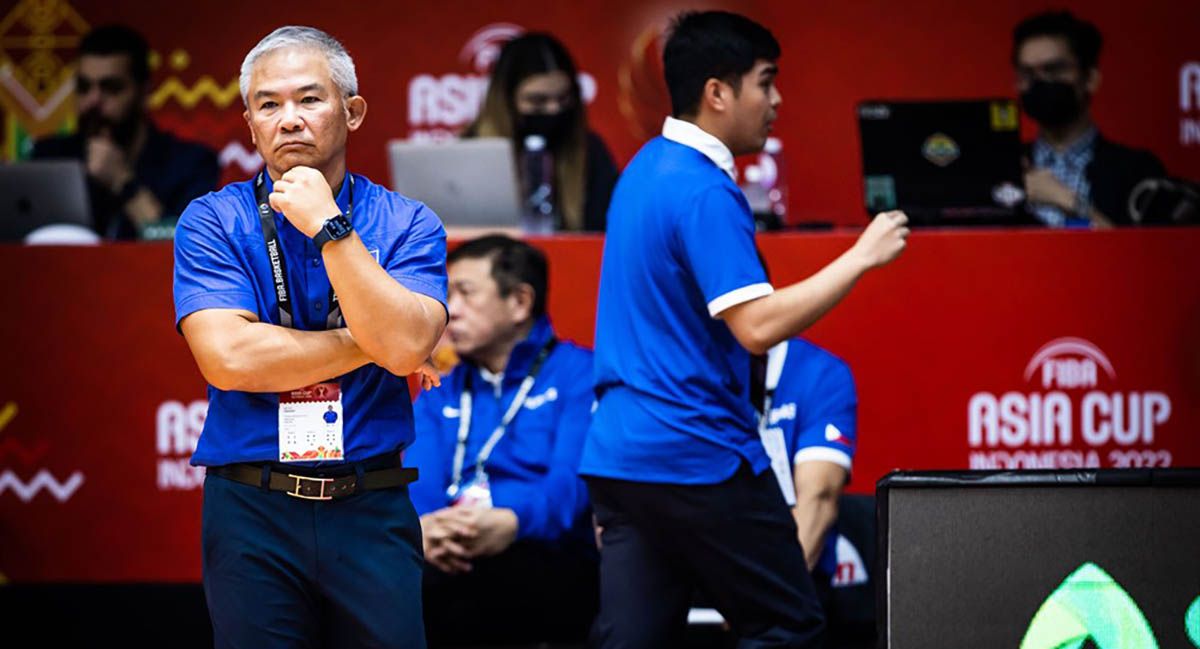 “This is my fifth month in the program. We are in a period of transition. In any transition, when things are going well, if there’s a transition, there’s a change. You will expect things to get worst first before it gets better. Ganun naman talaga lagi sa buhay, sa trabaho, sa basketball, sa sports. That’s why we are asking for everyone’s continued support and patience.

"I’ve taken full responsibility and accountability for everything that happened so far. Again, huge appreciation to President Al for his statement. But again, let’s stick and adhere to the main message of Mr. Panlilio which is, 'Let’s all unite and let’s all come together to make sure that we have the best team possible for 2023,” said Reyes.

Reyes also detailed how he took over as Gilas Pilipinas after receiving a call from Manny V. Pangilinan about Baldwin stepping down as coach. Reyes said he was not privy to the events that led to Baldwin’s resignation.

Reyes said he never asked for the Gilas job since he already had other duties, including being the head coach of TNT in the PBA.

“I said I have to think about it, I have to talk to my family about it. After giving it some deep thought, I eventually said yes. That’s why I couldn’t comment when people were asking about it because I wasn’t privy to it. Nung tinawagan nila ako, inooffer na sa akin. That’s all I know from my end. Anything else that transpired there, I guess you have to ask other people,” said Reyes.

“Hindi naman namin pinag-uusapan ‘yan. Sa amin, when they appointed me, we just put our head down and we did our jobs.

"I knew there would be a huge backlash but I didn’t know that it’s going to be this bad. It’s not something that I was losing over, wishing this, wishing that. For me, my focus always has been we have a game coming up, who is our team, when can we practice, how many players do we have.

"At the same time, I was coaching Talk ‘N Text. There were so many things on our plate to even think about those things. I can’t comment on that because it’s not something that I even consider except to say now that Mr. Panlilio has spoken and I’m grateful,” said Reyes.

After the poor showing in the SEA Games, Reyes said he continued to do his job when SBP didn’t accept his offer to resign.

“I did,” said Reyes, when asked if he indeed tendered his resignation. “Sa lahat ng sumusulat sa akin na nag-eemail, mag-resign ka na, and all that, hindi ako sumasagot. But fortunately, nagsalita na si President Al. That’s the reason. That’s my reply. Nag-resign naman ako, hindi nila tinanggap. That’s all I can say. I have a job. I was given this job to do.”

Reyes said the criticisms have affected his family, but is taking all the hits in stride as he has a duty to do as national coach.

“I must admit that it’s really difficult what’s happening now, what’s going on, what you guys are printing … It’s very, very difficult. It’s very difficult for my family. But somebody has to do the job. And I’ve always said before that I would never turn my back on my duty to flag and country,” said Reyes.