IT was supposed to be their only rest day in the 2017 Seaba Championship, but Gilas Pilipinas players showed up to support Batang Gilas on Monday at the Smart Araneta Coliseum.

Except for naturalized player Andray Blatche, all the Gilas players were at ringside to see the youth team drub Indonesia, 96-73, for its second successive win in the Seaba Under-16 Championship.

"We are just here to support the younger generation. We are very supportive of them and we are looking forward to them taking our place in the future," said Gilas coach Chot Reyes.

Reyes couldn't help but marvel at the talent of the youth players.

"I'm really happy. Hopefully, this group can stay together for a long period," the outspoken mentor said. "If they stay together, they have a bright future but if not, this potential is going to go to waste." 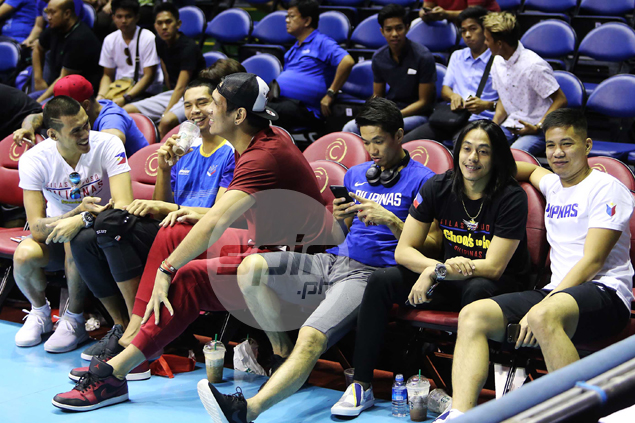 Watching the young cagers strut their wares in an international competition also brought back memories for Castro, a member of the 2004 RP Youth team.

Reyes and Castro were particularly impressed with the 6-foot-11 Kai Sotto, who finished with 12 points, seven rebounds, and two blocks in the game against Indonesia.

"I'm impressed with how coordinated he is for his size and age," Reyes said of the 15-year-old slotman.

Currently sitting atop the leaderboard with Indonesia with a 3-0 card, the senior Gilas team is making the most of its dayoff before taking on Thailand on Tuesday.