Asi Taulava warns Asia about Abueva: 'This guy is an animal' See VIDEO

That was the stern warning issued by veteran Fiba Asia campaigner Asi Taulava in the wake of the impressive performances put in by Calvin Abueva in Gilas Pilipinas practices.

The 43-year-old many-time national player was so impressed with Abueva as a teammate that he believes the former San Sebastian King Stag is bound to impress Asia and the world in the Fiba-Asia championships.

“I have played so many times with the national team and I have not seen anyone who plays as hard, as energetic and as tireless as Calvin. Damn, he is truly one of a kind,” Taulava told Spin.ph at the end of Gilas practice.

“Calvin is an animal. He is not human. He is more than a workhorse,” said the outspoken NLEX Road Warriors star.

To emphasize his point, Taulava went on a monologue in a video done for Spin.ph, delivered with the NLEX slotman's best imitation of the voice of famed ring announcer Michael Buffer.

“The world will know about him. Even in the NBA, rare yung nakakaregular na 20-20 na 6'1. He has the tenacity of Rodman on the boards, maybe even more." - Ollie Pop

“Asia, you’re about to be introduced to ‘The Beast.' This guy is relentless, I am telling you right now, you have never seen this guy play,” said Taulava.

“He will not stand still, he will set a screen, he will be the first one back on defense, he will hit you then he will smile at you. So get ready, you will be blown away,” he added.

“The Beast is one of a kind, he is made in the Philippines, straight from Angeles!”

Taulava bared that playing against Abueva in the PBA is a totally different from playing alongside the Alaska forward.

“It’s amazing. I’ve played against him in the PBA but to see him up close and the way he plays, I am just blown away. You just gotta let Calvin play. He just brings energy to everything he’s done. Offense, defense, he just hustles the whole time,” he said.

“It’s not just one thing that he does good. There’s a lot of intagibles he does for the team. You can see it in coach Tab, he likes the guy, I think coach Tab might adopt him, right coach?” said Taulava, turning to Gilas coach Tab Baldwin. 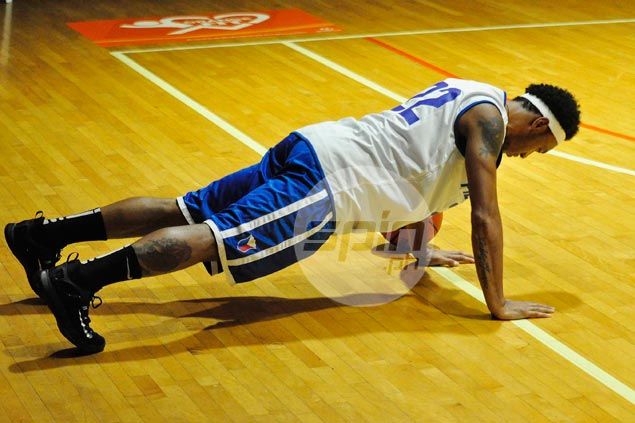 But what if he feels the need to get in somebody's head?