As Gilas losses pile up, Baldwin, Reyes turn to social media to defend young side

THE losses are piling up for Gilas Pilipinas, and so is the frustration from fans.

Gilas fans, perhaps not used to seeing the side lose this much games, turned to social media to vent their anger after the national side lost its third straight game in the Fiba Asia Challenge 2016 at the hands of China, 65-75, on Monday.

The young national side, though, has found staunch defenders led by Samahang Basketbol ng Pilipinas president Al Panlilio, who praised the players' fighting spirit in the face of its struggles in Tehran, Iran.

'I'm proud of these boys! This team doesn't back down against any opponent," said Panlilio in an Instagram post which he also shared on Twitter, punctuating his post with the words 'puso' and 'Laban Pilipinas.' 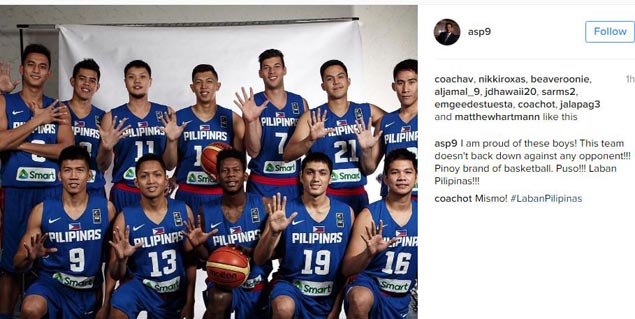 Former Gilas coach Chot Reyes said the losses are expected, considering the team is in transition in the absence of PBA players as well as amateur stars like Kiefer Ravena, Rayray Parks and Jio Jalalon.

In a series of posts on Twitter, Reyes explained that the team is no more than a developmental team and is not yet the Gilas 5.0 that the SBP is planning to put together after Fiba launched a new qualifying format that put in doubt the continued participation of PBA players.

As such, Reyes said the Tehran showpiece is no more than a learning experience for a team he still prefers to address as Gilas cadets and asked fans to 'trust the process.' 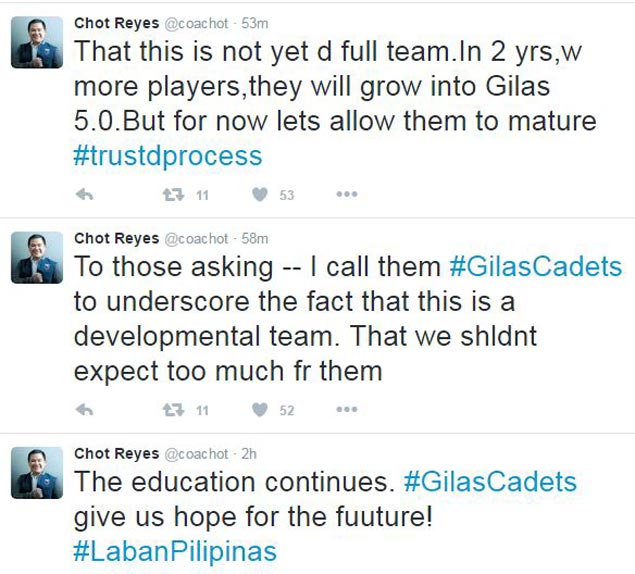 Reyes even sneered at a Twitter follower who took a dig at him and his son Josh, who called the shots for the team in lieu of Tab Baldwin who has focused on Ateneo's campaign in the UAAP.

On the other hand, national coach Baldwin underlined the word 'development' to describe the team's participation in the Fiba Asia Challenge, saying 'improvement is obvious' in the all-amateur side.

Baldwin added he already sees some of the current Gilas mainstays as 'future national team mainstays.'

"We will look back on this team with pride and appreciation," he said on Twitter. "Tough but worth it."