BEIJING — Luis Scola scored 28 points and grabbed 13 rebounds, and Argentina is heading to its first gold-medal game in 15 years after beating France 80-66 on Friday in a Fiba World Cup semifinal.

Scola finished it in style, hitting a pair of consecutive 3-pointers late in the fourth to push Argentina's lead to 15. Facundo Campazzo scored 12 for Argentina, which will play Spain for the World Cup title on Sunday night.

It's the first gold-medal game for Argentina since the 2004 Olympics, and its first World Cup final appearance since 2002. Argentina — a team with no active NBA players on its roster — will be bidding for its second title, after winning the inaugural world championship in 1950.

Frank Ntilikina and Evan Fournier each scored 16 for France, which will play Australia for the bronze on Sunday. Nando De Colo scored 11 for France, a team that looked nothing like the one that topped the U.S. in the quarterfinals on Wednesday.

Rudy Gobert, who led France in that win over the Americans, scored only three points against Argentina.

Argentina put together an early 10-0 run and led for all but 1:44 of the first half. Campazzo closed the opening 20 minutes with a floating 3-pointer over Gobert as time was expiring, and Argentina took a 39-32 lead into the break.

Gobert, who was dominant in the quarterfinal win over the U.S., was held to just one point in the first half on just one field-goal attempt. His second try came about four minutes into the third quarter — a two-handed dunk, which he missed, and Argentina turned the long rebound into points on the other end when Luca Vildoza made a pair of free throws for a 50-38 lead.

And any time it seemed like France was poised for a run, Argentina snuffed it out quickly. Ntilikina's 3-pointer late in the third got France within 12, only to be answered seconds later by a 3-pointer from Campazzo.

France had its deficit down to single digits for much of the fourth, before Scola's back-to-back 3s sealed the outcome. 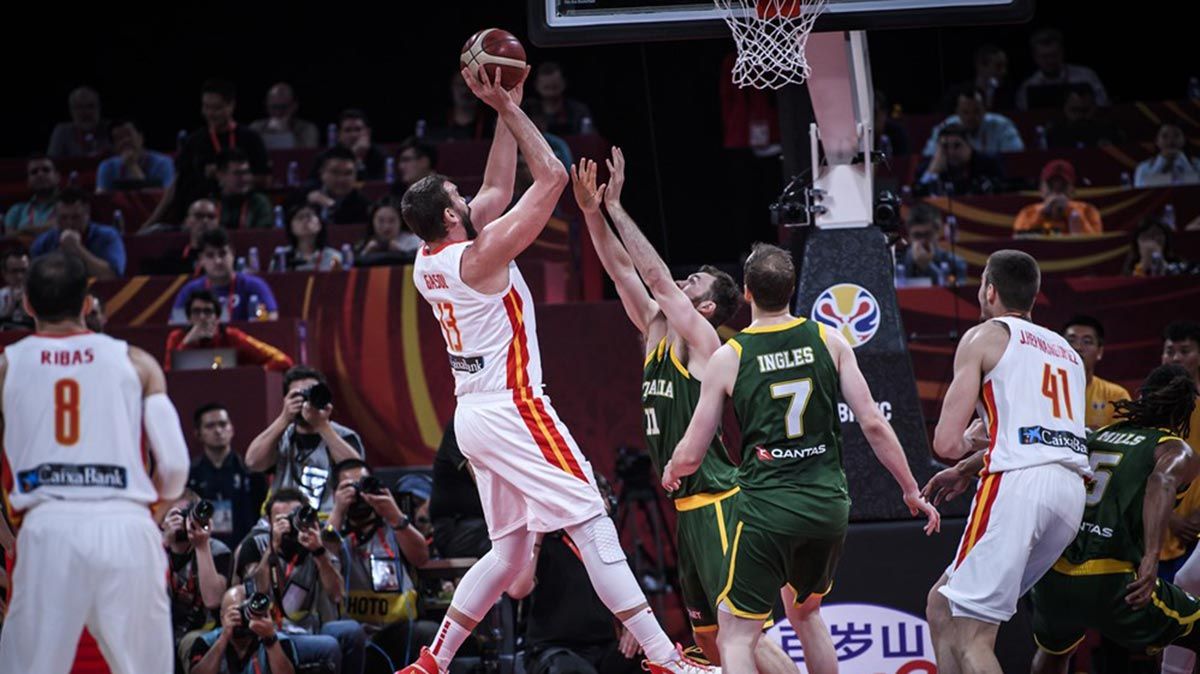 France: The French still have a chance to match their best World Cup finish, third in 2014 ... Vincent Poirier took a hard fall under the Argentina basket while fighting for a rebound late in the third quarter. He was able to get to the bench a few moments later. ... France fell to 1-5 against Argentina in major tournaments.

Argentina: Manu Ginobili, the longtime San Antonio standout and the leading Argentina-born scorer in NBA history, was courtside watching his national team. Fellow retired NBA stars Kobe Bryant and Chris Bosh were also courtside. ... It took Scola only 16:45 of playing time to get a double-double; he grabbed his 10th rebound with 21 seconds left in the half, and already had 13 points.

Argentina scored a bit of World Cup comeuppance. France and Argentina most recently met in a World Cup just last year — the soccer version. France ousted Argentina in the round of 16, prevailing 4-3 on its way to winning the title.

Spain has faced Argentina nine previous times in top-level international competition, and has a decided advantage in the rivalry. Spain is 7-2 against Argentina in those meetings, the most recent one being a 19-point win at the Rio Olympics three years ago.

France: Faces Australia for bronze medal in Beijing on Sunday.