EIGHTY-EIGHT years old and almost blind, the most successful coach in Philippine basketball history remained as humble as he was during his glory years.

Surrounded by generations of ball players who donned University of the East's red and white, including remnants of his fabled squad from the sixties and seventies, Virgilio 'Baby' Dalupan tried to deflect the attention and the praise when he was given a long-overdue honor by the Recto-based school on Tuesday night.

“I was very fortunate to be your coach and am honored to call you my players,” the eminent coach said in a heartwarming speech read for him by his wife Lourdes because he has lost sight in one eye and can barely see in the other.

“It gives me such a warm feeling to be back in the UE campus. Because for me, it is coming home to where my coaching career started more than 60 years ago when my father, founder and then-UE president Dr. Francisco Dalupan Sr., agreed to let me take over the reins of the UE Red Warriors.”

Dalupan had an extraordinary career as a coach, winning 15 PBA championships with Crispa, Great Taste and Purefoods that remains unsurpassed to this day, as well as 12 UAAP championships that included a historic streak of seven in a row from 1965 to 1971.

Dozens of former and present Warriors braved Tuesday's floods to join in a homecoming where Dalupan was feted with a UE Golden Global award, made an honorary UE alumnus emeritus and presented with a lazy-boy couch by the school.

“That is why the honor you give me today is the most special that I have received—because it is from you, my UE family,” Dalupan said.

Among those present was Dalupan's most famous player Robert Jaworski, who played under him during that unprecedented string of UE championships and was an adversary during the fabled Crispa-Toyota rivalry. The former senator was also a recepient of a UE Golden Achiever award. 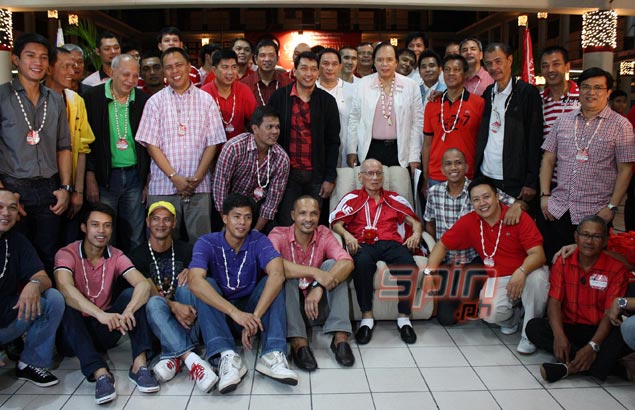