SOME fans feel Far Eastern University gunner Mike Tolomia and even University of the East playmaker Roi Sumang’s non-inclusion in the newly-formed Gilas cadet team were an injustice.

But not so for national coach Tab Baldwin.

Baldwin felt the sweet-shooting Tolomia as well with Sumang 'didn't try out well enough' in the week-long tryouts to merit a spot in the 16-man Gilas cadet pool he named early this month.

“They (Tolomia and Sumang) didn’t try out well enough. As simple as that,” Baldwin told Spin.ph.

“I went in (the tryout) without any pre-conceived ideas. These (16-man pool) are the guys that tried out well. I took the advices of all coaches there because my knowledge of the guys were pretty limited.”

Tolomia, a key figure in FEU’s runner-up finish to National University in last season’s UAAP men’s basketball finals, came to the tryouts with impressive collegiate numbers of 15.1 points, 4.4 rebounds and 3.3 assists for the Tamaraws.

On the other hand, Sumang, a member of the 2013 Sinag national squad that retained the Southeast Asian Games men’s basketball gold, averaged 12.5 points, 4.2 assists and 3.0 rebounds last season.

[See Sumang accepts Gilas cut, but his coach has a lot more to add]

Nash Racela, one of Baldwin’s assistants in the cadet team and Tolomia's coach at FEU, said Tolomia wasn’t in the best of shape when the invitation to try out came last month.

“Galing siya (Tolomia) actually sa bakasyon kasi after the UAAP, we went straight to the D-League so wala kaming break and tuloy-tuloy kami,” explained Racela, who also handled the MJM M-Builders composed mostly of players from FEU in the D-League.

“After the D-League, we gave them the opportunity to rest, like si Mike and Mac Belo. In fact, even Belo was not really in the best of shape, then all of a sudden, na-invite sila a week before kaya medyo naghabol ng conditioning,” he added.

Racela said Baldwin may have seen some weak spots in Tolomia’s game, which needs further honing.

“Maybe there were a couple of things na nakita ni Coach Tab, some things he (Tolomia) needs to improve on,” said the soft-spoken Tamaraws coach.

Reigning UAAP MVP Kiefer Ravena, Bobby Ray Parks, Kevin Ferrer, Garvo Lanete, Belo, and naturalized player Marcus Douthit were among those who were named by Baldwin and his coaching staff to the 16-man pool.

These six were already members of the national squad in the 2013 edition in Myanmar.

The final 12-man lineup will represent the team to the SEA Games in June and the Southeast Asian Basketball Association (Seaba) Championship in April, which serves as the qualifier to the Fiba Asia Men’s Championship this September in China. 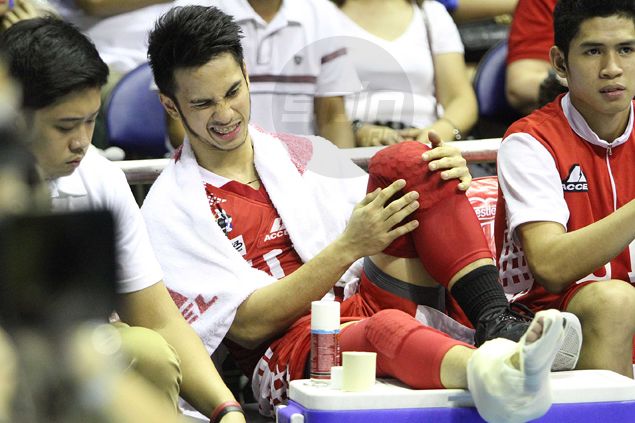