WHEN Mila’s Lechon consented to put its name on a PBA D-League team this season, all management ever wanted was a chance to market its brand to a larger audience.

Little did they know that it would become a bit more complicated.

The new team in the developmental league quickly got dragged into controversy after it got blown out by an average of 26.2 points in four games and got massacred, 102-55, by Zarks Burger–Lyceum in a match where observers felt the players ‘just quit playing’ during the second half.

Immediately after that game, the team, from management to the coaches to the players, were summoned by PBA commissioner Willie Marcial and technical supervisor Erik Castro to a meeting where, sources said, there were more questions than there were answers.

The very next day, the PBA announced that the Mighty Roasters 'have disbanded,' the first team to do so in midstream in the seven-year history of the league.

Sought for comment by SPIN.ph, Aika Salanguit, the youthful team owner of the Mighty Roasters, vowed that the team will return to the D-League stronger than ever.

However, the sudden disbandment wasn't the end of it. Information examined by SPIN.ph showed a disturbing betting pattern in major international sites that cast suspicion on the results of some D-League games - the Mila's-Zarks game included.

What’s surprising is how games of the D-League, among other smaller leagues in the country, appear to be of interest to major betting sites all over the world for ‘professional gamblers’ to bet on, with tens of thousands of dollars changing hands in one match alone.

Aside from the D-League, games of other smaller leagues, even the NCRAA, appear to have attracted interest from these major betting sites.

"Milyunan ang taya," bared one member of a D-League team.

A source familiar with the major betting sites who claimed to be 'following the D-League for two to three seasons now' confirmed the suspicious patterns in some games, the most glaring being the Zarks-Mila's Lechon match last February 28.

In that game, Zarks, as expected, came in as heavy favorites with an opening spread of +30.5, meaning the Lyceum-backed squad coached by Topex Robinson would have to win by 31 to pay off for bettors.

But the source said the real meat of the betting came in through live bets, where the handicap changed as the match progressed.

The source, who followed the match through live stats provided by the betting site, said he was 'appalled' to see the odds rising despite the game being close in the first half.

The game was tied at 25-all after the first quarter before Zarks took a narrow five-point lead at the half. But instead of the point spread narrowing, bets kept coming in for a huge victory for Zarks, causing the handicap to balloon even more.

Under such trend, thousands of dollars in bets will have to be placed on Zarks for the line to reach as high as 46.5 after one quarter.

So who in his right mind would put big money on a team to win by 40 plus points when the game was highly competitive after the first quarter?

“Nobody will (bet that). Only those who probably knew how it will finish would bet that,” the source answered.

Mila's Lechon fell apart in the second half. The team scored just 16 points in the final two quarters after putting up 25 in the first quarter alone. Fans who trooped to the Pasig Sports Complex were dismayed by turnover upon turnover that led to easy lay-ups for the opponents.

The team was beaten by 47 points; the betting line ended with a spread of 45.5.

The source who followed the match through live stats said the ending was 'totaly illogical.' So disturbing, in fact, that Zarks coach Topex Robinson spoke out after the game, saying "we're gonna play our basketball no matter if they (other team) don't wanna play basketball." 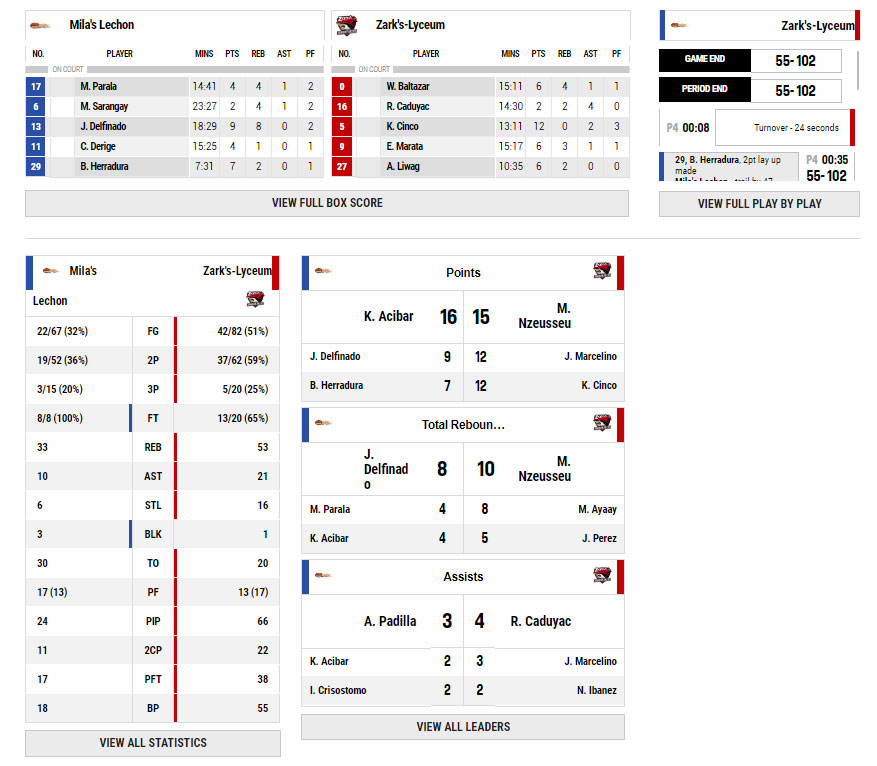 It wasn't the first time

As perplexing as the result was, it wasn't the first Mila's Lechon game that left bettors dumbfounded, the source bared.

He cited the first game against Jose Rizal University. The pre-game betting line had the Heavy Bombers as 8.5 favorites, seen by many as a fair spread. But when the live bets came in, that was where the pattern got really 'strange,' the source added.

By the first quarter, the handicap ballooned to +18.5, meaning there were bets coming in for the Bombers to win by a wide margin even while Mila’s Lechon was ahead 12-8 with less than five minutes to go.

The finish to that game was weird, to say the least.

Mila’s last scored with 3:02 left to trim the lead down to 15, 82-67. The team then turned the ball over four times, went 0-of-4 from the field, and sent the Bombers to the free-throw line eight times in the final 1:17, including four in the last 39 seconds. JRU's lead ballooned to 29 in the end.

Sources said such incidents are no longer new and more or less follow the same pattern. Such suspicious finishes happen in mostly smaller leagues, which catch less attention compared to the PBA, UAAP, or NCAA, and mostly involved new teams. The strange spike in bets also happen during live bets.

The source said creating multiple accounts is integral to the process because betting sites only allow an account to bet $3,000 in a specific time frame. Once it exceeds that amount, the site automatically blocks the account from placing any more bets.

But with multiple accounts, a bettor can pour in a lot more money while the match is ongoing.

League insiders told SPIN.ph a couple of other teams in the D-League have figured in matches that had similarly disturbing betting patterns in the same international sites, raising fears that results of some matches are being fixed to suit bets.

The fears, as it is, are legitimate. Just last November, eight players and one team owner were banned from the Indonesian Basketball League for fixing the results of four matches.

In the Philippines, suspicions about game-fixing are mostly talked about in whispers and no team or player has ever been charged - much less convicted - of game-fixing, in any level.

The PBA, which runs the D-League, has yet to issue a statement on the Mila's Lechon incident, although a source bared that it was PBA officials who convinced Mila's Lechon to withdraw from the league after being confronted by the suspicious betting patterns.

A league official also confirmed that the owners of Mila's Lechon were only convinced to back the team and had little or no knowledge about the way the ballclub was run. They also didn't hesitate to pull the plug when informed about the controversy, he added.

The team manager and head coach of the team aren't well-known in D-League circles, even among league officials and veteran sports writers. They have yet to reply to messages seeking comment.