The Red Team trailed for most of the title match after Blue posted several double-digit margins before going on a 19-5 run in the last quarter.

Carlou Lloren, an incoming freshman at Olivares College, was named MVP of the game after scoring all his 15 points in the second-half comeback.

The two sides were composed of players selected in a three-month nationwide streetball clinic and competition. The game also featured the players from HYPE Streetballers, a group dedicated to promoting streetballer culture in the Philippines, who impressed the audience with their fancy freestyle skills. 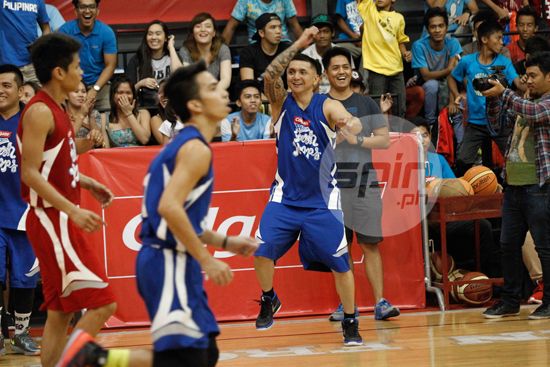 The first half saw a lot of freestyleplays and showboating but things became serious in the fourth quarter. Aside from bragging rights, the winning team got to take home P180,000 worth of prizes and scholarships.

After the game, the public later had a chance for a meet-and-greet with the PBA stars.

“I’m really thankful for Colgate for putting something like this together. It’s a chance for kids who may not have opportunities to go to college to really showcase their talent. To have LA and I both here to help them to do just that in a great environment, we had a really great time,” said the recently retired Alapag, who was pretty animated on the sideline.

“I’ll always miss playing. It’s been four-and-a-half months since I’ve retired and the fire to compete will always be there," Alapag added.