CHICAGO — Candace Parker returned home to bring Chicago a championship. She did just that, leading the Sky to the franchise's first title.

"This one is so sweet," a champagne-soaked Parker said. "To do it with this group. I love this group, I love this team. And to do it here at home, it was just supposed to be."

The Phoenix players declined to come to the postgame press conference. The door to their locker room was broken and a person familiar with the incident said at least one of the team's players was responsible. The person spoke to the AP on condition of anonymity because the investigation was ongoing.

Courtney Vandersloot added 10 points and 15 assists for the Sky, who won the series 3-1, rallying from a 72-65 deficit with 4:42 left. Chicago scored the next nine points to take a two-point lead on Stefanie Dolson's layup. She then added another basket to make it 76-72 with 45.8 seconds left.

Diana Taurasi was fouled on the next possession shooting a 3-pointer and made the first two free throws, but missed the third.

Vandersloot then scored in the lane to seal the victory and set off the celebration. As the final buzzer sounded, Parker sprinted to the corner of the court and hugged her family with tears in her eyes.

"It was amazing to just hug my dad and my mom," Parker said. "It was just an amazing feeling to be from here and see so many people in the stands that have been supporting you since you started. It's just a moment where you just have to really take it in."

It was a full-circle moment for Parker, who triumphantly returned home to Chicago this season after spending 13 years with Los Angeles. She has been continually called the Sky's missing piece throughout the playoffs, a label she proved accurate many times during Chicago's stunning run, winning the title as a six-seed.

Brittney Griner was a focal point of Phoenix's offense early on. The seven-time All-Star finished the game with 28 points, 18 of which came in the first half. Griner and guard Skylar Diggins-Smith helped lead a 9-0 run to finish the second quarter and give Phoenix a 44-37 edge at halftime.

Yet, Quigley's fourth-quarter outburst ultimately undid any attempts Phoenix could make to stave off elimination.

"It wasn't our night," Phoenix coach Sandy Brondello said. "Allie made some really big shots for them. We left her open, and she made them. It would be nice to be going back to a Game Five now, but it's not going to happen this year."

Parker initially had trouble getting into a rhythm offensively, going one for six from the floor with just four points by the end of the first half.

Phoenix's lead stretched to 14 at one point in the third, but the deficit wasn't big enough to shake Chicago's confidence down the stretch.

"We stayed together," Sky coach James Wade said. "It was a microcosm of our season, where you go down and you keep pushing. By the end of it, the crowd took over, our players stayed together and you started to see who we were. I never doubted for a minute that we were going to win that game."

Kahleah Copper, who had been a force in the first four games of the finals, earned MVP honors of the championship.

"I have this edginess and grittiness about me that's going to keep me going," Copper said. "It was very important for me to be consistent coming in this year and better than I was last year. You put the work in and you get rewarded." 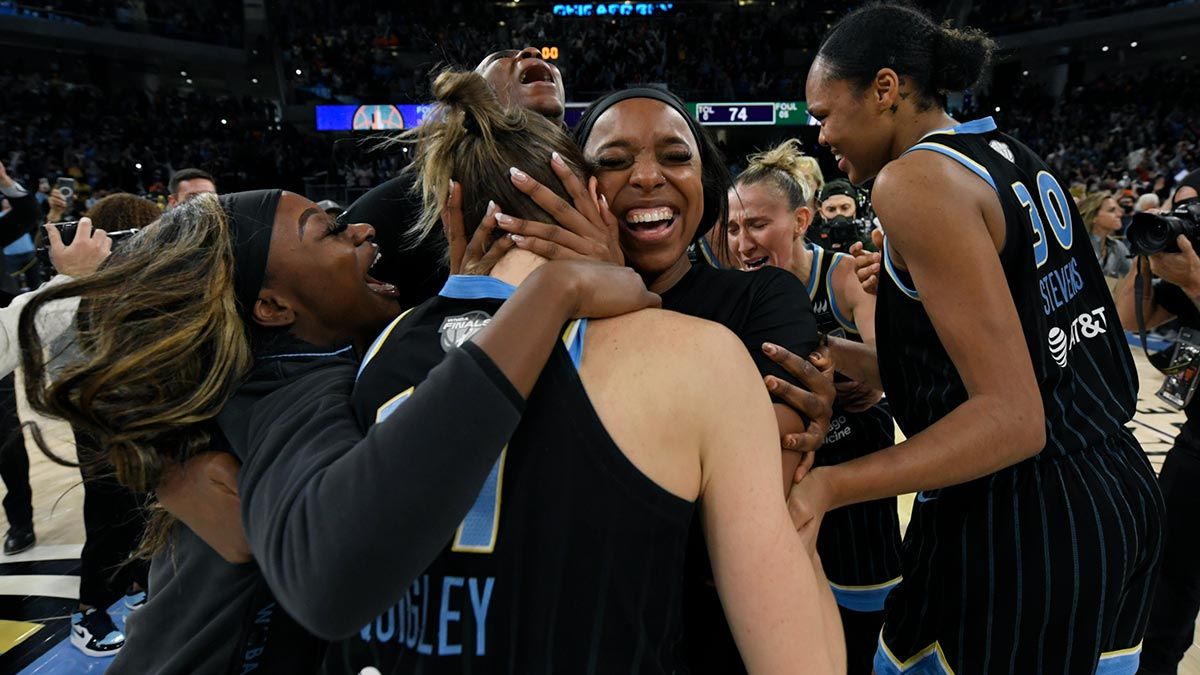 The Chicago Sky, formed in 2006, clinch their first title in franshise history.

After the game, Parker mentioned a picture she took with her daughter on the court after she won her first championship with Los Angeles. She keeps the photo on her wall, and her daughter's desire to be part of a similar moment helped convince Parker to come back home.

"I asked her if it was OK if I came to Chicago," Parker said. "And she was like 'I want another picture like that.' It's crazy, because she came out to the court and said 'we did it,' and it was just surreal."

Emotions were high for both teams right from the start, as Taurasi and Copper were each hit with technical fouls within a 50-second span in the first quarter.

The Sky drew a sell-out crowd despite the Chicago Bears hosting the rival Green Bay Packers just down the street at Soldier Field. Chance the Rapper was once again in attendance to support his hometown team.

Chicago coach James Wade became the third Black male coach to win a WNBA championship, joining Michael Cooper who did it with the Los Angeles Sparks and Corey Gaines, who did it with Phoenix. ... Phoenix had been 4-0 in the WNBA Finals after losses until Sunday's defeat.

With Tim Reynolds and Doug Feinberg