Rucker Park? Try ballin' in this Tondo court before some of world's most rabid basketball fans

IF you've seen this amusing video of the crowd watching a basketball game played deep in the heart of Tondo, Manila that has gone viral on Facebook, then you know what the fuss is all about.

If not, allow us to let you in.

The video was posted by a certain Eileen Trias, who filmed portions of the final minutes of an inter-barangay game from the second floor of her family’s house located on one end of the court.

What was special about the video was not so much the game but the crowd, which was so thick it not only made inbounding the ball legally impossible, the spectators also spilled onto the court when possession was on the other side of the floor and parted like the biblical Red Sea during fastbreaks.

To get a better idea, watch Charlton Heston’s ‘Ten Commandments.'

Or better yet, watch the video of the rabid Tondo fans literally taking over the court during changeovers. Trias' Facebook post already has more than two million views, 15,000 likes and close to 17,000 shares at posting time.

Intrigued, SPIN.ph decided to find out more about the game and the place using some old fashioned journalism — we went to Tondo, one of the most densely populated areas in Metro Manila. It turned out our editorial assistant Badeth Rivera grew up in the area and her familiarity proved invaluable.

From the Tayuman LRT station, we were unable to get a taxi or Uber. We opted to take a jeep and transferred to a kuliglig (a motorized pedicab) the rest of the way to Barangay Bangkaso where the court is located.

En route, it seemed that every other corner and every available lot hosted a basketball game on rudimentary basketball courts under the noonday sun. A Tondo resident, Manila Bulletin sportswriter Waylon Galvez, said scenes seen on the video are common in leagues hosted in an area which has produced tough players in the mold of Charlie Badion, Tembong Melencio, and 'Angas ng Tondo' Paul Lee.

After we were dropped off at the Bangkaso basketball court, we introduced ourselves to some of the guys playing there and in less than a minute we met Mark Yu. It turned out it was his parents who organized the tournament that featured the game in the video.

This was the scene that we saw: 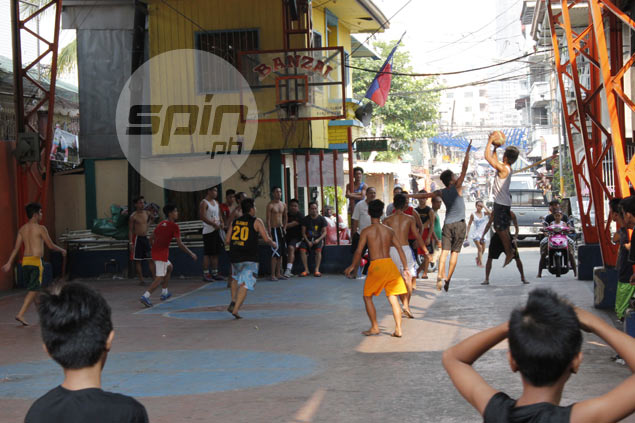 Soon we were being guided along maze-like warrens and alleyways of Barangay 70 Zone 6 District 1 to a house where a large carriage bearing a huge statue of the Black Nazarene was parked. Mark entered the house and called his mother to talk to us.

We learned that Barangay Councilor Maria Lorna Yu and her husband Ariel have been hosting inter-barangay basketball tournaments since 2012 but it was the first time that they had attracted such a large crowd that showed up on March 6, the day of the championship games.

Excitement over the finals match had built up since the tournament started two months ago, they said.

The game on the video was the title match held last March 6 between D Chrisman and Rance of the Bangkaso Open League, the last teams standing out of 10 squads whose players were selectees from different places in Metro Manila.

The tournament had a height limit of 5-8, regardless of age. Yu said it was an opportunity to watch some of the best players in the barangay circuit from different parts of Metro Manila.

When we showed the video to the kagawad, she said she had no idea that it would attract the attention of so many people. 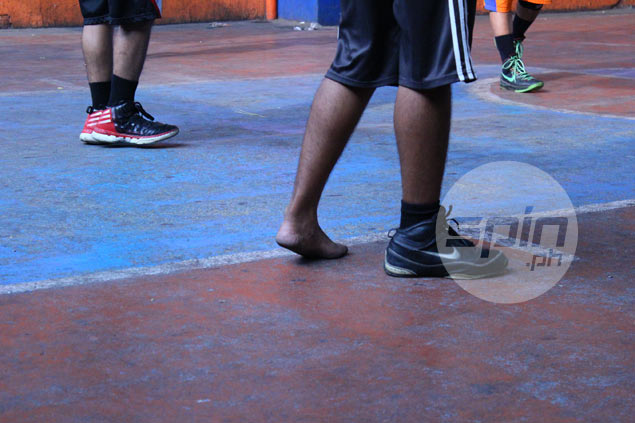 The covered court appeared to have been built over what was once a two-lane road, so it was obviously non-regulation - the three-point line ending abruptly at both ends and the baseline uneven. The length of the court was bounded by the wall of an elementary school on one side and a line of houses on the other.

The much-anticipated match drew a standing room only crowd that filled every nook and cranny of what was already a small area to begin with. It was winner-take-all for the "dayos." Not just for the P7,000 cash prize but more importantly, bragging rights

During the time we were there, a pick-up game in progress hardly ever stopped even as scooters, motorcycles, carts and pedestrians passed by. It was, however, well-maintained judging by signs of a recent renovation. The supporting girders were newly painted, a new roof, modern lights and lane markings provided under a sports program headed by PBA legend Philip Cezar, who is now the top sports czar of Manila under the mayorship of Joseph Estrada.

The court obviously also has some history. Uy said PBA rookie Roi Sumang once played in Bangkaso during his college days while former PBA star Paul Alvarez made one of his patented dunks while he was a guest in one of the ligas in the 90s. 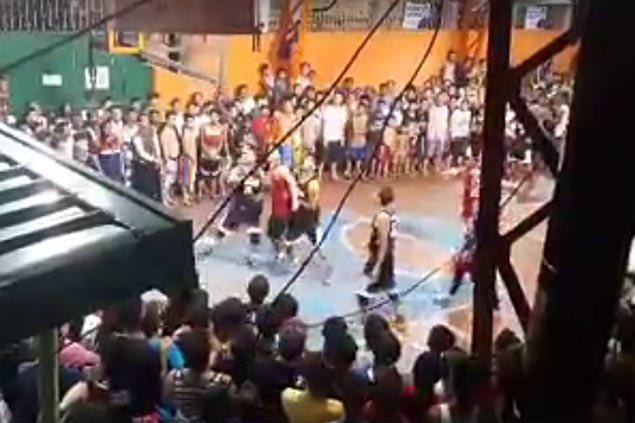 On the night in question, the combination of the crowd and the narrow confines led to people literally spilling all over the court during the course of the game since there really was no room to speak of. Breathing space was a luxury and the only onlookers who sat were those perched on the rooftops. Some even climbed the posts for a better view (and fresher air).

Ariel, who acted as commissioner, said the people stood more than ten deep.

She said the sheer size of humanity simply overwhelmed barangay staff that was supposed to rope off the court and maintain order during the proceedings.

Angelo Legaspi, the court announcer, said a lot of people would normally step into the court since it was the only available space and even the players took everything in stride, “Wala na pong nakakasaway sa nanood e.”

With Rance leading 49-47 with 1:04 left in the fourth quarter, things got a little physical and with the high emotion brought by the crowd, organizers felt the game could get out of hand any second. 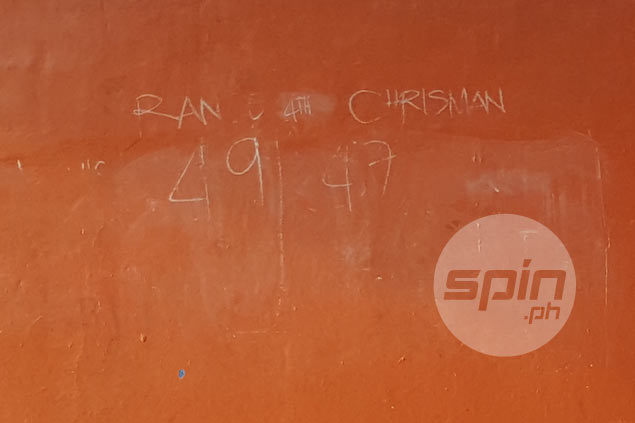 To defuse the volatile situation, Kagawad Yu went on the microphone and, as the organizer, made the gutsy move of declaring the two teams co-champions. The game that started at 10:30pm ended at 1 in the morning. 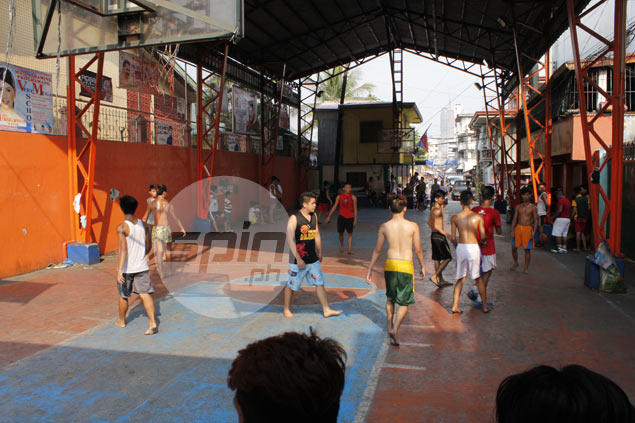 During the course of our interview, Yu repeatedly stressed that organizing a “liga” was hard work and was a source of headaches for them, “Kami na lang nagtiya-tiyaga. Mahirap magpa-liga. Sobrang hirap.”

When we asked why they continued to do so, the lady official’s response is familiar to basketball fans around the world.

A life-long resident of Tondo,Yu said people in their part of Manila hold basketball as a source of pride and joy. Her eldest son Mark, a 5-10 point guard, is a freshman taking up Finance at the PSBA on a sports scholarship. 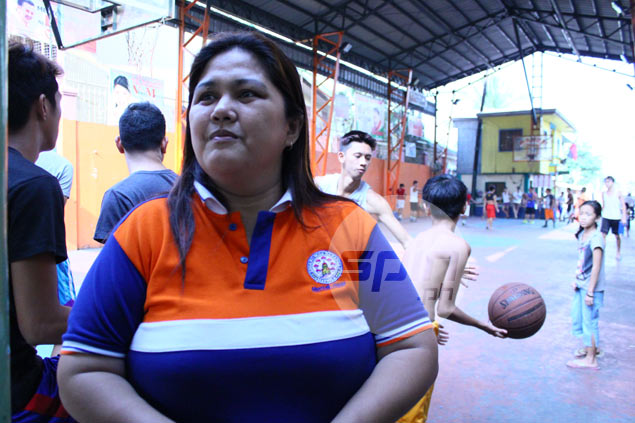