ALAB Pilipinas will forever be grateful to San Miguel Corp. for coming in midstream to salvage the latter's season in the Asean Basketball League (ABL).

On Wednesday night, Alab crowned an up-and-down season with a maiden championship, defeating Mono Vampire Basketball Club in five games to become the third Philippine team to rule the regional league after San Miguel Beer in 2013 and Philippine Patriots in 2010.

But the ride wasn't smooth at all for the club, which fell at the semifinal stage in its inaugural ABL season in 2017 and appeared to be on the brink of collapse the following year when its original title sponsor, Tanduay, pulled out.

The withdrawal left Alab in a predicament since ABL teams run under a club system where sponsorship money sustains the squad - unlike in the PBA where the company owns the team.

Left without a sponsor, the team grew desperate until head coach Jimmy Alapag reached out to former Gilas Pilipinas teammate and Barangay Ginebra cager LA Tenorio in a bid to seek an audience with SMC sports director Alfrancis Chua.

“Actually, it was Jimmy who reached out to LA Tenorio and LA talked to Alfrancis Chua,” said team owner Charlie Dy, a revelation later confirmed by the former Gilas captain.

“I reached out to LA,” Alapag confirmed. “He was able to connect Boss Alfrancis, Charlie, and I. It really set off from there.”

Despite the challenges of running the team especially on the financial side, Dy, a former UAAP coach both in college (Adamson) and high school (UST), said he was determined to keep the squad going and give deserving players the needed break.

Alapag said San Miguel's entry came at a time when the team was struggling to find its form, going 0-3 to start the season before Justin Brownlee and Renaldo Balkman came in as import replacements.

“I can’t thank them enough for the support. You lose your title sponsor five games into the season, that’s not ideal. It’s tough when you are losing. I know Charlie and I looked at each other and said, ‘Now what?’ But again, for them to come on board and to support us the way they did. And here we are,” said Alapag. 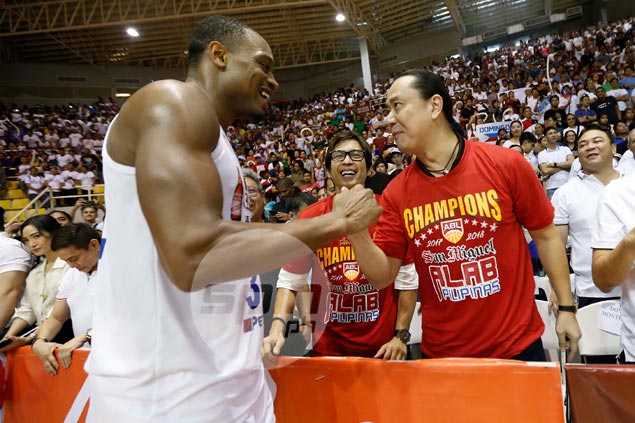 Dy also thanked Alapag, who not only accepted the challenge to coach the team and helped the ballclub way beyond the position required.