JERSEY STORY: Bobby Ray Parks Jr. shifts to No. 1 as he sets out to carve own identity and legacy

Here's No. 22 of our Jersey Story Series:

BOBBY Ray Parks, Jr. has made the switch to jersey No. 1 as he sets out to etch his own name in Philippine basketball upon his return to play for Alab Pilipinas in the Asean Basketball League (ABL).

Long before he went back to the Philippines to pursue a college basketball career, Parks had always worn No. 22 - a jersey number identifed with his late father Bobby Sr..

Parks decided to make the change, saying he wants to leave the legacy of that number to his late father - a legend in Philippine basketball having won an unprecedented number of Best Import awards in the PBA.

Parks said he has always wanted to wear number 1 since his days in National University but UAAP rules that only allows jersey numbers 4 to 21 prevented him from wearing that jersey number.

When the option to wear No. 1 opened up for him with Alab Pilipinas, Parks said he seized the opportunity which he said also constantly reminds him of God.

Parks said his faith has brought him to many different places in his basketball career, from his time at National University to his pursuit of his NBA dream with the Texas Legends in the NBA D-League.

“Every time naririnig ko ‘yung No. 1, Siya na ang iniisip ko. It also reflects on the court. He changed me a lot from Coach E (Eric Altamirano, NU coach), to now that I’m a veteran but only 23 years old. Marami akong na-experience on and off the court which helped me grow.” 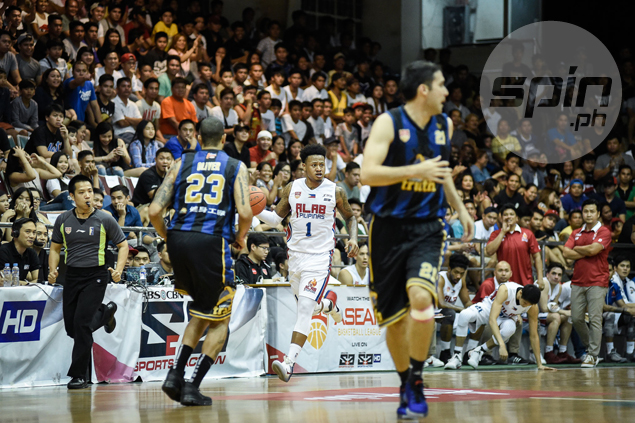 Last month, Parks returned to Philippine basketball via the ABL, the league where, incidentally, his father landed his last basketball job as coach of the defunct San Miguel ballclub.

Even though the move was met with mixed reactions, Parks felt the exposure he got in high-level competition while pursuing his NBA dream didn’t go for naught.