CHICAGO — Bottom of the first, two out.

Willson Contreras lines an RBI single against Corbin Burnes to give the Chicago Cubs an early lead over the Milwaukee Brewers on Saturday (Sunday, Manila time).

The crowd cheers and, just to be clear, it's not one of those piped-in roars. Fans just beyond the ivy at Wrigley Field, up on the rooftops, are letting loose.

Though the Cubs would go on to get pounded 8-3, just seeing a game in person from high and far was a welcome diversion for Dr. Dave Barounis. While major league ballparks are off limits to the general public, Wrigley Field is one of the few spots where they can look in on the action.

“It feels really like you're getting back to normal to be able to go watch a baseball game,” Barounis, an ICU physician at Advocate Christ Medical Center in suburban Oak Lawn. “It just feels like it's a natural part of what we'd normally have for summer. What we're all looking forward to is to kind of break the monotony that's been the last several months. It feels like we're getting back into the routine of things. It reminds us that things are going to get better, and better days are ahead.” 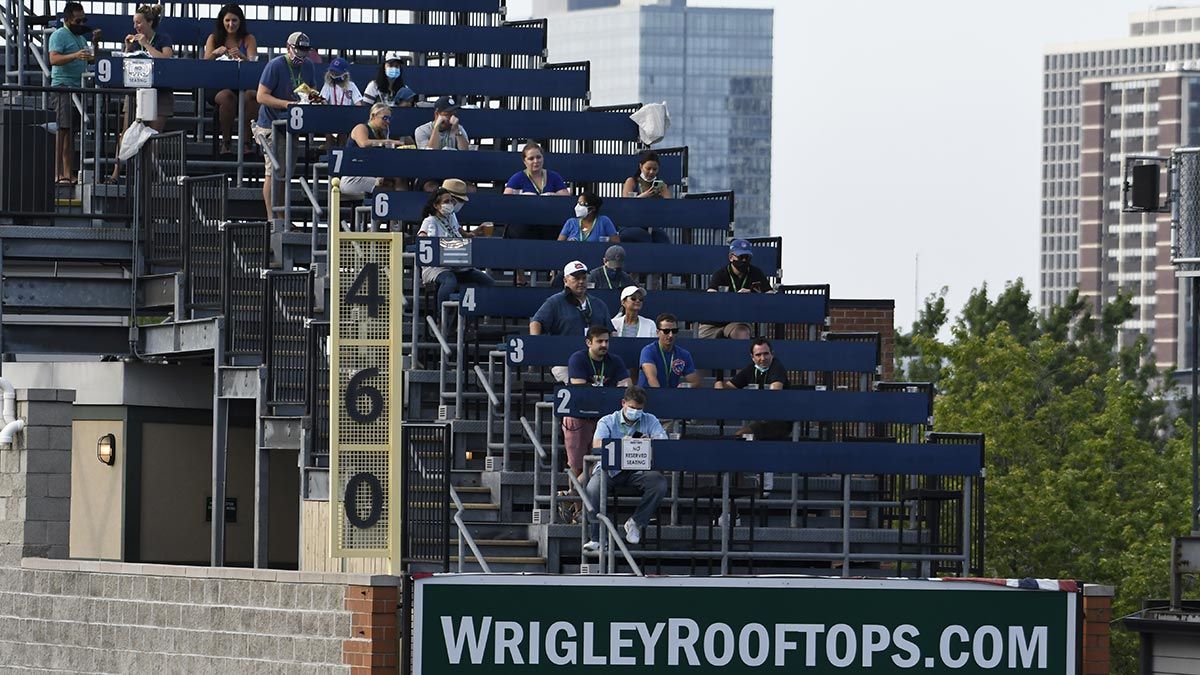 Little about this pandemic delayed season is routine, with the start pushed back four months because of the coronavirus, the schedule slashed from 162 games to 60 and teams playing without spectators in the stands.

But for fans looking to see major league baseball live, there are few options besides the rooftops along Waveland and Sheffield avenues. Boston has the Bleacher Bar tucked under the center field seats at Fenway Park. San Francisco has the promenade alongside McCovey Cove.

Another possibility might have been the hotel at the Rogers Centre in Toronto, but with the Blue Jays barred by the Canadian government from playing at home because of concerns about the coronavirus, that's out.

The available tickets are going fast with about 90% purchased, Cubs executive vice president of sales and marketing Colin Faulkner says. Team ownership has 10 of the rooftop businesses and sells for one more. Some groups buy out a rooftop and distribute only a portion of those tickets to allow for more room to social distance.

“The demand was overwhelming,” Faulkner says.

Across Waveland Avenue, just beyond the left-field bleachers, Barounis was one of about 20 people on an outing with Advocate Healthcare. There were temperature checks at the entrance and reminders all around about social distancing, with some seats blocked off.

Food options are scaled down, most coming prepackaged, and served by staff instead of the usual buffet. But there are plenty of drinks as well as hand sanitizer. And the view isn't bad, either.

The warning track from left to center is blocked by the bleachers, and the large video board cuts off deep center field. But most of the action is easy to see. And sounds that would normally be drowned out can be heard.

Cheers from the home dugout are audible. And the Cubs can hear the noise coming from the rooftops.

“I think the only thing I heard was the typical Ryan Braun boos (in Friday's opener)," manager David Ross said. “I think their own team booed him when he got announced yesterday; they want to make him feel right at home. He's a pretty good sport about all that.”

For Jim Landini of Dyer, Indiana, seeing the empty stands from the rooftop is “very, very bizarre."

“My whole life, I played baseball," he says. "My whole life I've been coming to games. It's a lot less energy for the players. They're competitive. They'll keep playing.”

Mostly a White Sox fan, Landini came with his wife who works in human resources for Advocate. He pitched for Robert Morris University in Chicago and goes to a handful of games on both sides of the city.

“Being in the stands, it's a little more intimate,” Landini said. “For me, having knowledge of baseball, I can kind of pick up on the little innuendos that go on throughout the game.”

That's obviously tough to do watching from a rooftop. But after being “locked in the house for five months and not having much of a social life,” he was enjoying the opportunity to see a game live — even if he wasn't in the ballpark.