ATLANTA — A guy who spent most of the season in the minors kept the Braves in it. Then the offense finally came to life.

Just like that, Atlanta is one win from its first World Series title in 26 years.

Dansby Swanson and pinch-hitter Jorge Soler connected for back-to-back homers in the seventh inning on Saturday night (Sunday, Manila time), propelling the Braves to a 3-2 victory over the Houston Astros and a commanding 3-1 Series lead.

Game Five is Sunday night. The Braves can wrap up the championship on their home field, just as they did two stadiums ago when they beat the Cleveland Indians in 1995.

That triumph at the old Atlanta-Fulton County Stadium remains the franchise's only World Series crown since moving to the Deep South in 1966.

This is the closest they've been to a second title since then.

A huge shoutout goes to a most unlikely hero.

Former No. 1 draft pick Kyle Wright, who has largely been a huge disappointment in repeated chances with the Braves, turned in 4 2/3 gritty innings out of the bullpen after surprise starter Dylan Lee retired only one hitter.

Wright was hardly overpowering, giving up five hits — including a homer by Jose Altuve in the fourth that staked the Astros to a 2-0 lead — and three walks. But he continually pitched out of trouble, giving the Braves a semblance of hope until the offense woke up.

That finally occurred in the sixth when Eddie Rosario became the first Atlanta hitter to get past first base with a one-out double off Brooks Raley.

Rosario wound up scoring on another clutch postseason hit by Austin Riley, who lined a two-out single to left against Phil Maton.

The Braves left the bases loaded, but they weren't done. Just like that, they stunningly engineered the first lead change of the entire Series.

Facing Cristian Javier, Swanson went the opposite way for a homer that tied the game at 2, the ball hit so hard that it ricocheted off the tabled section in the right-field stands and rolled all the way back to the infield.

The celebration had barely simmered down when Soler stepped to the plate as a pinch-hitter. On a 2-1 pitch from Javier, he got hold of a hanging slider and drove it into the Astros' bullpen in left, Yordan Alvarez hanging helplessly over the fence as the ball sailed over his head. 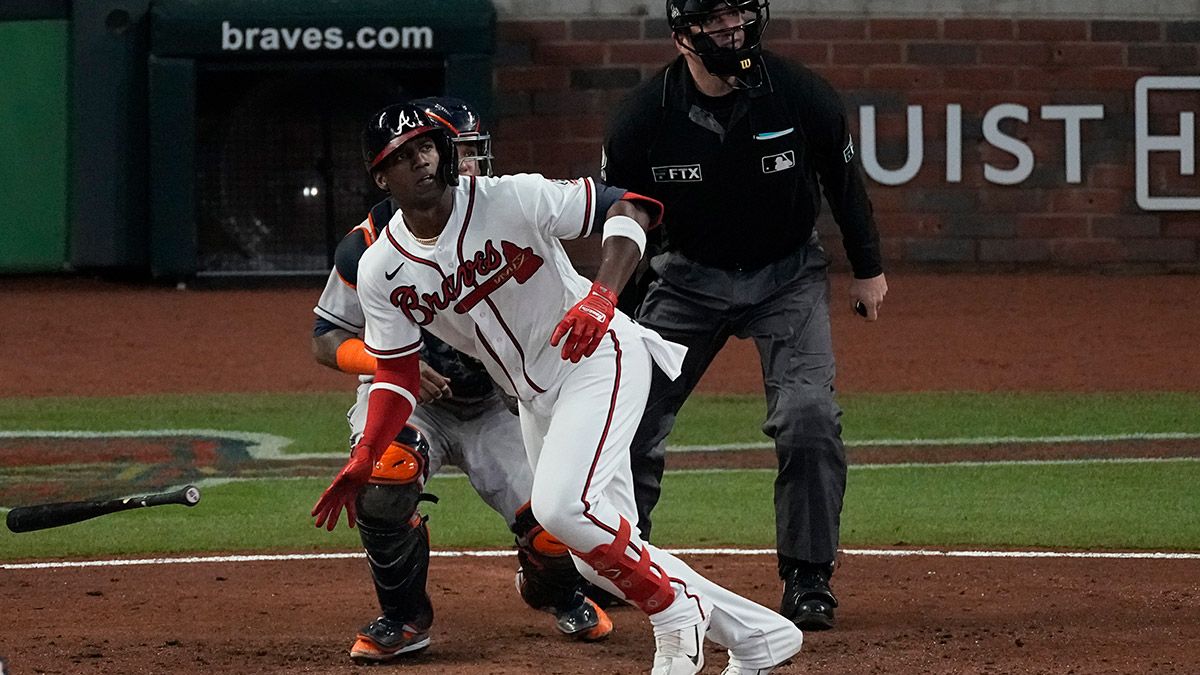 Luke Jackson worked a scoreless eighth, getting a great catch from Rosario slamming into the left-field wall that Soler homered over, and Will Smith worked a 1-2-3 ninth for his sixth save in six chances this postseason.

The Astros could only kick themselves for squandering countless chances, going hitless in eight at-bats with runners in scoring position and leaving 11 on base overall.

Houston got just what it wanted from 38-year-old starter Zack Greinke, who threw four scoreless innings.

Greinke had last pitched in the World Series in 2019, when he was an 18-game winner acquired by the Astros in a trade-deadline deal.

Two years later, Greinke is no longer one of baseball's most dominant pitchers. But he gave the Astros just what they needed in the bullpen era — four solid innings to leave with a 2-0 lead.

The Braves' pitching was in a bit of disarray after Game 1 starter Charlie Morton was lost for the rest of the Series with a broken leg.

With former President Donald Trump watching from a private box down the right-field line — he even joined fans for the tomahawk chop — Atlanta decided to go with a parade of relievers, starting with a guy who was released by Miami before the season and spent most of the year in Triple-A.

Lee wasn't even told he would be starting until he got to the ballpark Saturday afternoon, in hopes that he wouldn't have too much time to get nervous.

But he looked overwhelmed by the moment, retiring only one hitter before he was lifted with the bases loaded, having walked two and thrown just five of 15 pitches for strikes.

It was the shortest Series start since 2003, when David Wells lasted only one inning for the Yankees in Game 5 before leaving with back spasms.

Wright escaped the jam with only one run scoring on a groundout and made only one major mistake before his night was done.

Altuve went deep with one out in the fourth, launching a 434-foot drive over the center-field wall. It was his 23rd homer in 77 postseason games, which pushed him to second place all alone on the career list behind Manny Ramirez with 29.

Only months after calling for a boycott of Major League Baseball, Trump chopped away with fans before the game while standing beside his wife, Melania.

Trump encouraged a boycott of MLB games after Manfred removed the All-Star Game from Atlanta over Georgia's new voting law. The game instead was held in Denver.

Unlike the 2019 World Series in Washington, when Trump was booed while still in office, there was no obvious reception for the former president at Truist Park.

His appearance was not announced to the crowd.

Lee was one of the most unlikely starters in World Series history.

The 27-year-old left-hander had never pitched in the big leagues until the final weekend of the regular season, when he was called up from Triple-A Gwinnett to make a couple of appearances after the Braves had already locked up the NL East title.

He had been released by the Miami Marlins at the end of spring training and signed a minor league deal with the Braves.

Lee didn't last long in Game 4, but he will forever be known as a World Series starter.

Game 1 loser Framber Valdez gets his second start of the Series for the Astros. The left-hander lasted only two innings last Tuesday, giving up eight hits, five runs and two homers in a 6-2 setback.

The Braves will counter with their second consecutive bullpen game. No word on who will be the opener in a start that would've gone to Morton if not for a broken leg that ended his season in Game 1.