ATENEO blew a six-run lead but recovered to beat University of Santo Tomas, 14-12, in a 12-inning, five-hour marathon and capture the UAAP Season 79 baseball tournament at the Rizal Memorial Baseball Stadium.

Ateneo catcher Gino Tantuico hit a two-run double that broke an 11-11 tie before scoring on the following at-bat to finally put the game away for the Blue Eagles at the top of the 12th inning.

By completing a sweep of the best-of-three finals, the Blue Eagles reclaimed the UAAP crown they lost last season to rival La Salle which snapped their three-year reign in the collegiate league.

Pitcher Paulo Macasaet regained his composure after yielding three straight hits at the bottom of the 12th by getting the final three outs of UST. He was later named Finals MVP.

The Blue Eagles appeared on the verge of a cakewalk after taking a 9-3 lead in the sixth inning, only to give up six in the next two innings to allow the Golden Sox to tie the ballgame.

Tantuico’s game-winning RBI also atoned for his blunder in the seventh inning when he committed a wild throw to third base that allowed UST to knot the score at 11.

Ateneo also got out of a two-out, bases-loaded jam in the 10th inning to extend the contest.

“Kung titignan mo, they have a lot of men on base. So laging nagkakatalo nang nagkakatalo. Our break was when we held them with the bases loaded, I knew na this is our chance kasi papalo ‘yung top of the batting order,” said Dizer.

Chris Hilario’s RBI single triggered a five-run fifth inning for the Blue Eagles before Lorenzo Ramos’ RBI single in the sixth put Ateneo up, 9-3. The Blue Eagles were still up, 11-9, at the top of the eight inning.

UST, which made its first finals appearance in six years, refused to wilt as John Benedict Pedracio and Noriel Valencia blasted run-scoring hits at the bottom of the eighth to force another deadlock.

Ron Dela Cruz kept UST in the game in a seven-inning relief job as the lefty pitcher struck out eight batters but gave up the most important runs for Ateneo. 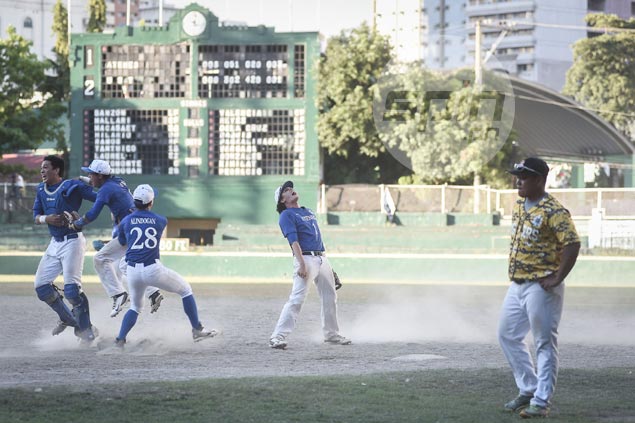