HOUSTON — Aaron Sanchez looked like a reinvented pitcher in his Houston debut, throwing six stellar innings to start the Astros on a combined no-hitter Saturday night (Sunday, Manila time) in their 9-0 victory over the Seattle Mariners.

Sanchez was an All-Star in 2016 and led the American League in earned run average, but he's struggled badly this season and had lost 13 straight decisions to lead the majors with 14 losses. Three days after he was acquired from Toronto at the trade deadline, the 27-year-old right-hander teamed with Will Harris, Joe Biagini and Chris Devenski to shut down Seattle.

"Just trying to have a good first impression," Sanchez said.

It was the second time in less than a month the last-place Mariners were no-hit by multiple pitchers. The Los Angeles Angels used two pitchers in a combined no-hitter July 12 against Seattle on a night when they honored late left-hander Tyler Skaggs by all wearing his No. 45 in their first home game since his death.

After throwing 92 pitches, Sanchez (4-14) was replaced by Harris to start the seventh.

Sanchez kept the Mariners off balance with a steady stream of fastballs in the low-to-mid 90s (mph) coupled with slow curveballs that often froze batters for strikes as he worked with veteran catcher Martin Maldonado, picked up by Houston in a trade with the Chicago Cubs earlier in the week.

Harris and Joe Biagini, also obtained from the Blue Jays in the same deal that netted Sanchez, each worked one inning before Devenski tossed a perfect ninth. He retired All-Star slugger Daniel Vogelbach on a routine fly for the final out, setting off an Astros celebration on the field after the club's 12th no-hitter.

Hall of Fame pitcher Nolan Ryan, who threw one of his record seven no-hitters for Houston, was at Minute Maid Park to see this one.

"This is awesome," Sanchez said, adding: "You can't write it up any better than this."

Sanchez struck out six, walked two and hit a batter with a pitch in his first victory since April 27 for Toronto. He had been winless in 17 consecutive starts. 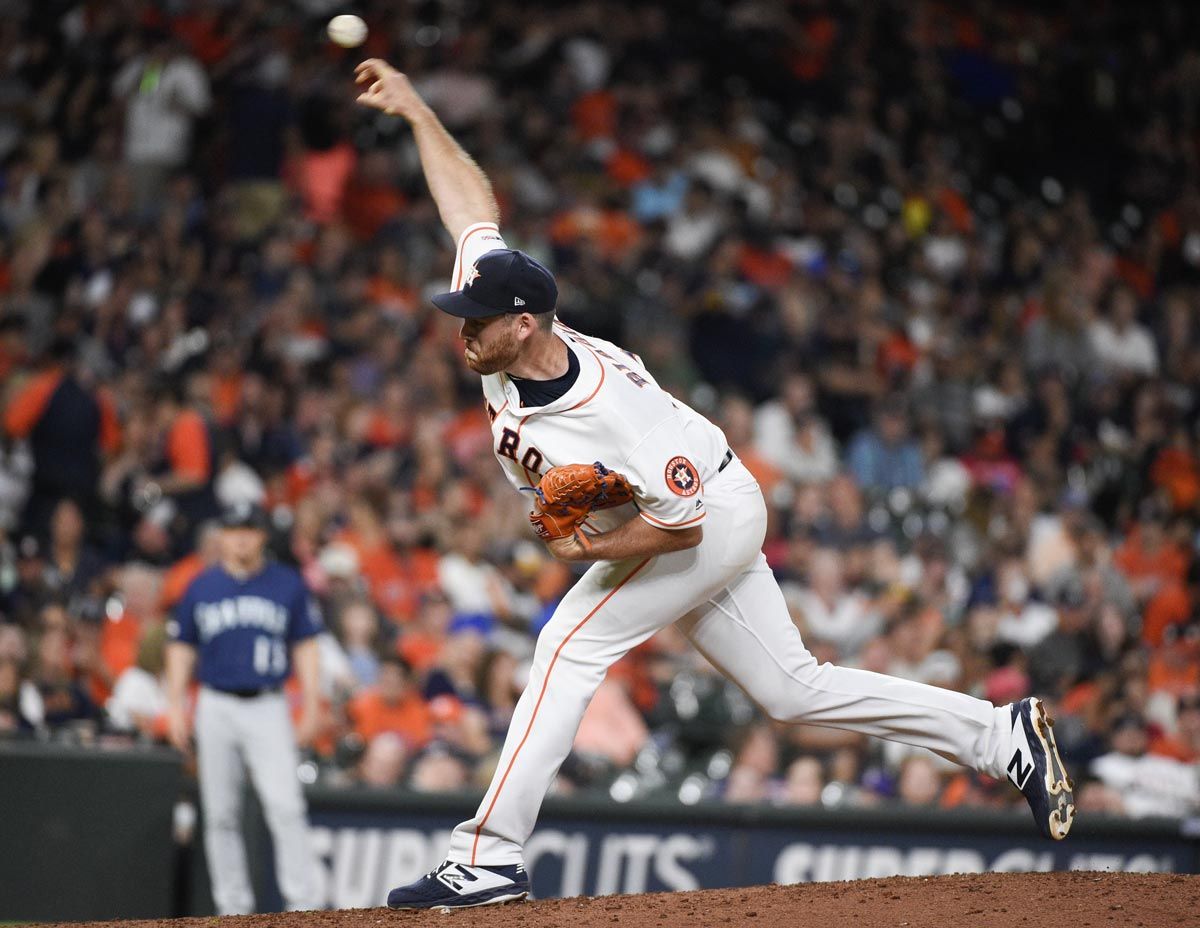 Houston manager AJ Hinch patted Sanchez on the chest after he finished the sixth, and pitching coach Brent Strom offered a hearty handshake.

The Astros have an impressive history of improving the performance of pitchers they acquire, and Hinch was asked recently what they would do to help Sanchez get back on track.

"We don't have magic dust," Hinch said. "There's a lot of people in the organization that go to work to try to find the one thing that can unlock people's potential."

After the deal, Sanchez was eager to get going with his new team.

Sanchez was a first-round draft pick of the Blue Jays in 2010 and went 15-2 with a 3.00 ERA over 30 starts in 2016. He was excited for his fresh start in Houston but also grateful for his time and opportunity with the Blue Jays. The pitcher took out a full-page ad in the Toronto Sun on Saturday to thank the team and city for their support throughout his career. 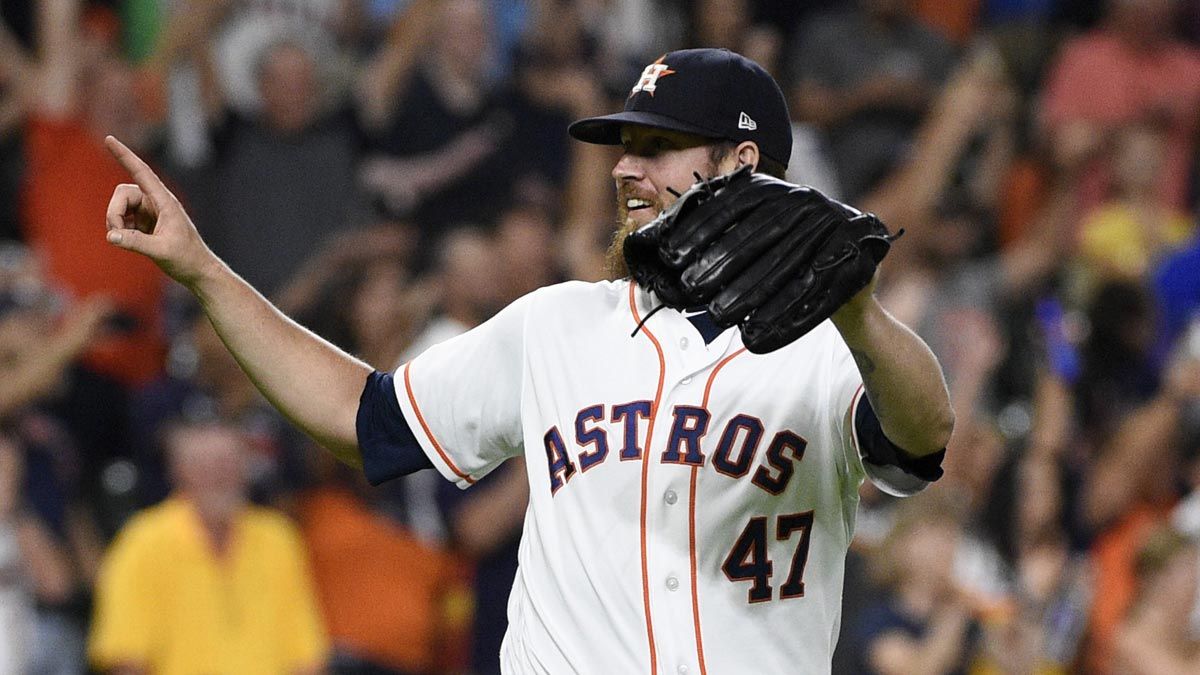 Sanchez walked Mallex Smith with one out in the sixth, then retired the next two batters to end the inning.

Harris walked Domingo Santana with one out in the seventh, but J.P. Crawford grounded into a double play.

Mike Fiers pitched the previous no-hitter for Houston against the Los Angeles Dodgers on Aug. 21, 2015. That gem came in his third start with the Astros, just 23 days after they obtained him in a trade, and it was his first career complete game.

Houston used six pitchers in a combined no-hitter at Yankee Stadium in 2003.

Besides the Angels' combined effort, Fiers has the only other no-hitter in the majors this season, for Oakland on May 7 against Cincinnati.

Marco Gonzales (12-9) allowed eight hits and four runs in five innings as the Mariners fell to 1-11 against AL West leaders this season.

Mariners: RHP Felix Hernandez, out since May 12 with a strained right shoulder, pitched two perfect innings for Class A Everett on Friday, and manager Scott Servais said Hernandez will likely throw about 45 pitches in his next rehab game.

Astros: C Robinson Chirinos was out of the lineup for a third straight game with soreness in his right shoulder.

Mariners: Seattle will use an opener Sunday but Servais hadn't yet said who it will be. After that, LHP Tommy Milone (1-5, 4.39 ERA) will make his 14th appearance of the season.

Astros: RHP Justin Verlander (14-4, 2.73 ERA) allowed two hits and struck out 13 in seven innings of a 2-0 victory over Cleveland last time out to win his fourth straight decision.