DOHA, Qatar — None of them could believe it.

Not the woman who pulled off the biggest upset of the world championships.

Not the woman she beat.

And certainly not that second-place finisher’s husband - decathlete Maicel Uibo, who walked away with a silver medal that was almost as big a surprise as the one his wife is taking home.

On a warm-and-fuzzy kind of night at the track where nothing went quite as expected, Olympic champion Shaunae Miller-Uibo suffered her first loss in the 400 meters in more than 25 months despite shattering her personal-best time by more than half-a-second. The woman who beat her was 21-year-old Salwa Eid Naser of Bahrain, whose time of 48.14 seconds was the fastest since 1985 and the third fastest ever.

When Naser crossed the finish line and saw her time, her jaw dropped in a look of utter amazement - a far cry from Miller-Uibo’s stony glare at the scoreboard: How could she run 48.37 and lose?

“I still can't believe the time,” Naser said. “When I saw the time, I went completely crazy. I was training so hard but I never expected to run this fast.”

But this Thursday night at Khalifa International Stadium was a night for expecting the unexpected.

Uibo, the decathlete, certainly didn’t come out of nowhere, but neither was he at the top of the list of medal candidates.

Since winning the NCAA title competing for Georgia in 2015, he had never captured an international decathlon competition. At the last worlds, in 2017, he didn’t finish. At the Olympics in 2016, he finished 24th. He was coming off leg and shoulder injuries that had forced him to miss a big chunk of 2018-19, and that had turned his javelin throw into a crap shoot.

But midway through the second day of the 10-event endurance test, world record holder Kevin Mayer got bounced after failing to record a mark in the pole vault, while another top contender, Lindon Victor, met a similar fate in the discus throw. Meanwhile, Uibo had been slowly climbing up the standings, from sixth, to fifth, to third, to first.

He had a 19-point lead over the eventual winner, Niklas Kaul, when he lined up for the finale, the 1,500-meter race. Uibo needed to hang within 3 seconds of Kaul to win the gold. But Kaul’s personal best was 10 seconds faster than Uibo’s. Kaul, 21 and now the youngest world champion decathlete ever, beat him by 15 seconds.

“I tried to stay with him, but he had more in the tank,” Uibo said. “I had to give that up and try for second.” 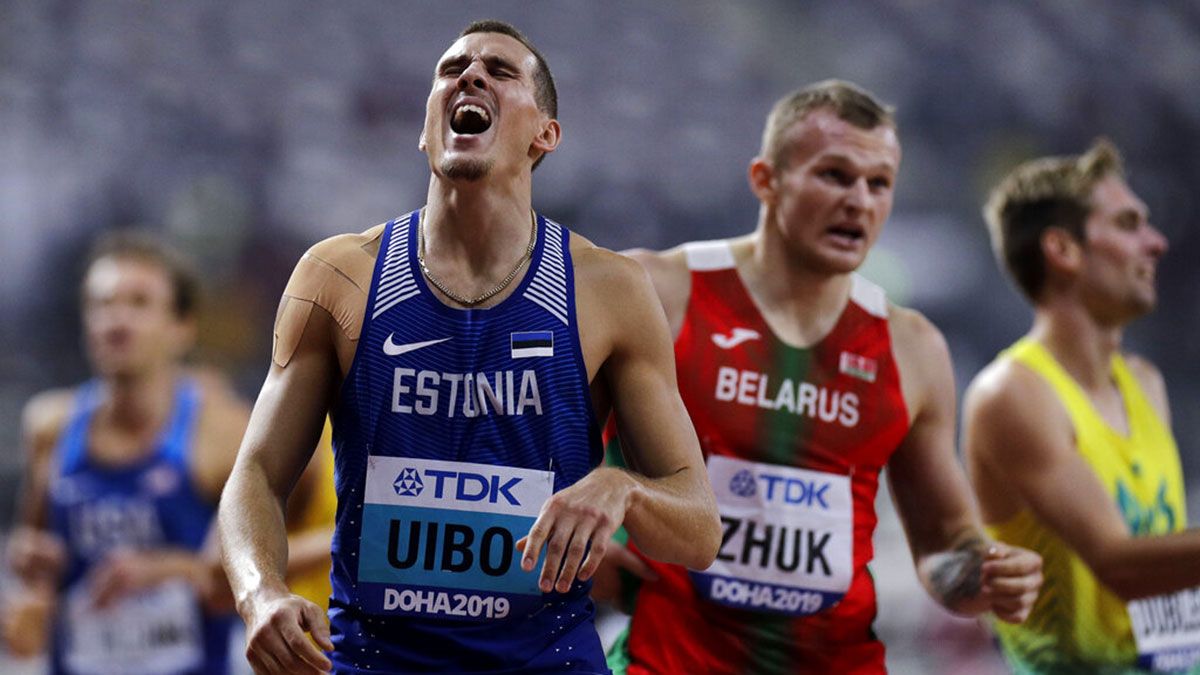 A few minutes earlier, Britain’s Katarina Johnson-Thompson completed her victory in the heptathlon; the multi-events were held in conjunction as part of organizers’ plan to move all the action to the nighttime and beat the heat.

That marked the third field medal in these championships won by athletes from Usain Bolt’s land of sprints. Who’d have seen that coming?

And speaking of unexpected, how about the bronze medal that landed in the lap of Orlando Ortega.

The Spanish hurdler had been closing the gap with the leaders when he got knocked off course in the 110 final the night before by a flailing Jamaican. Ortega spent most of Thursday in bed, thinking about what might have been. The phone rang. Track officials had decided to make him the co-bronze medalist. The ceremony was scheduled for that evening.

“I took a taxi,” Ortega said. “I said, ‘Please drive very fast, I have a medal ceremony.’”

He made it on time.

So did Naser, who looked more like a 100-meter sprinter as she moved into the homestretch and built a seven-step cushion over Miller-Uibo, who became famous in her homeland, the Bahamas, when she dove across the finish line to beat Allyson Felix in the final of the 2016 Olympics.

There were no such dramatics this time.

“When I saw the distance between us, I said, in my head, ‘I let her get too far away,’” Miller-Uibo said. “I knew I had a lot of strength coming home, but I just couldn’t get her.”

All that was left was to hang out and see how Maicel would do about a half-hour later, as he dragged his exhausted legs to the start of the 1,500 to finish off the evening.

Shortly after her husband crossed, Miller-Uibo walked out and doused him with a bottle of water, then gave him a kiss.

“It’s great we get to celebrate together,” Miller-Uibo said.

They train together, too. Maicel described the relationship as “competitive at times.”

“It’s on and off the track. Anything, really,” he said. “Sometimes we just argue about who our dogs love most.”

Maybe soon, they’ll tease each other over who has the prettier of those two silver medals they’re taking home. The obvious answer for both husband and wife: “I do.”