A report by the Philippine Daily Inquirer said the Philippine Athletics Track and Field Association (Patafa) has created a committee to look into the claim that Obiena's camp failed to turn over an amount meant for his Ukrainian coach.

The Patafa has also ordered Obiena to return EUR85,000 (over PHP4.8 million) in financial assistance, the report added.

"All I can say, with documented evidence, is these rumors are 100% false and represent nothing more than character assassination," the Olympic pole vaulter said in a statement released to media outlets.

The report also indicated that the release of funds for Obiena's continued training in Formia, Italy have been suspended pending the result of a probe by the committee created by Patafa.

Obiena later appeared in an online press conference with Petrov, who claimed that he has been paid all his salary in full since he started coaching the Filipino pole vaulter in 2018.

Attached in the Petrov letter were documented proof of the payment. 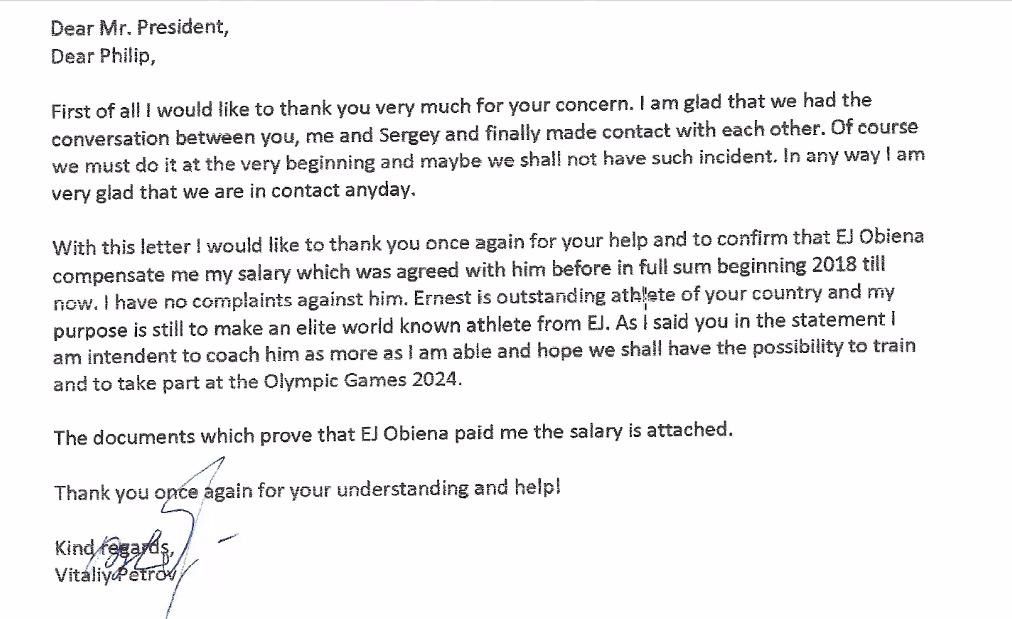 "I have prided myself in embracing the values of discipline, competitiveness, honor, transparency, and respect. This doesn’t change even in times of crisis," wrote Obiena.

Obiena said he has decided to file charges against Patafa for defamation of character because of the incident.

"This entire incident has damaged my reputation. I welcome any court of law to shed light under the power of evidence and investigate this matter," he said, adding that he has already "filed complaints before the Philippine Olympic Committee (POC), the International Olympic Committee (IOC), and World Athletics for 'defamation of character.'

"If you want a textbook example of how to destroy an athlete, you're seeing it right here," he said.

The second-generation pole vaulter said he is also mulling retirement in the wake of the incident.

Obiena remains in Europe after the Tokyo Olympics and recently set a new Asian record when he cleared 5.93 meters, at the International Golden Roof Challenge in Innsbruck, Austria back in September.